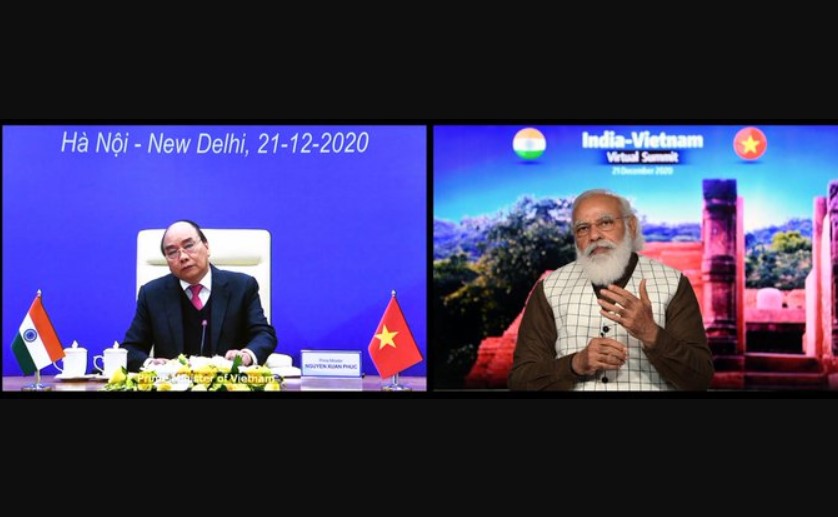 NEW DELHI: With China firmly in their sights, India and Vietnam unveiled a Joint Vision for Peace Prosperity & People at the end of their virtual summit on Monday. The following lines in the document would be familiar to anybody following strategic politics of the Indo-Pacific. It underscored the two countries commitment of working “towards achieving a peaceful stable, secure, free, open, inclusive and rules-based region.”

The document noted the changes in the “emerging geopolitical and geo-economic landscape in the region and beyond” and spelt out what the two countries intended to do in clear, unambiguous language.

“The two sides will step up their military to military exchanges, training and capacity building programmes across the three services and coast guards and will intensify their defence industry collaboration… they will further intensify… mutual logistics support, regular ship visits, joint exercises… both sides will engage more closely in dealing with traditional and non-traditional security threats in cyber and maritime domains…”

With the intent clear, they signed seven agreements ranging from defence and petrochemicals to nuclear energy and science and technology. Under a $100 mn line of credit, India’s L&T is building five coastal patrol boats for Vietnam, one of which was formally handed over. More are being built in Vietnam with L&T offering expertise, engineering and design.

“Vietnam is a key pillar of our Act East policy and a crucial partner in our vision for the Indo-Pacific,” said Prime Minister Modi. “Our Comprehensive and Strategic Partnership is expanding into newer areas and we take a long term and strategic view of our relationship with Vietnam. We have common perception of our regions.”

Now, for some perspective. “The focus on military and security works well at this point for India and Vietnam,” says Prof. Srikanth Kondapalli, China scholar at Delhi’s Jawaharlal Nehru University, “India is already training Vietnamese navy personnel in the operation and maintenance of Russia-supplied Kilo class submarines. Vietnamese air force pilots and technicians are also being trained on the Su-30MK-2 aircraft that are a variant of what the Indian Air Force flies.”

But it may not be easy for the two militaries to operate together since Vietnam’s constitution does not allow for military alliances or bases (like India’s). Which is why the Indian Navy may have to remain content with berthing facilities in Haiphong on the northeast coast bordering China, and at Nha Trang in the south east.

When it comes to military equipment, it may be only a matter of time before India starts transferring missile systems like the BrahMos. Given China’s intransigence in Ladakh, this is akin to India crossing the Rubicon. Of course, when it will happen is not clear.

“A key player in this India-Vietnam jugalbandi could be Japan,” says Prof. Kondapalli, “which is also emerging as a supplier of military equipment to Hanoi. What form this could take in the future we can only speculate upon”.

Last word: A major weakness in the India-Vietnam bilateral relationship is trade, which was less than $13 billion last year. That figure may have come down even further because of the pandemic. Although the vision document lays down an ambitious programme of long-term investment in each other’s economy, enhancing physical and digital connectivity, e-commerce and so on, Vietnam’s trade and business priorities may be focused more on its southeast Asian neighbours (ironically, China included)