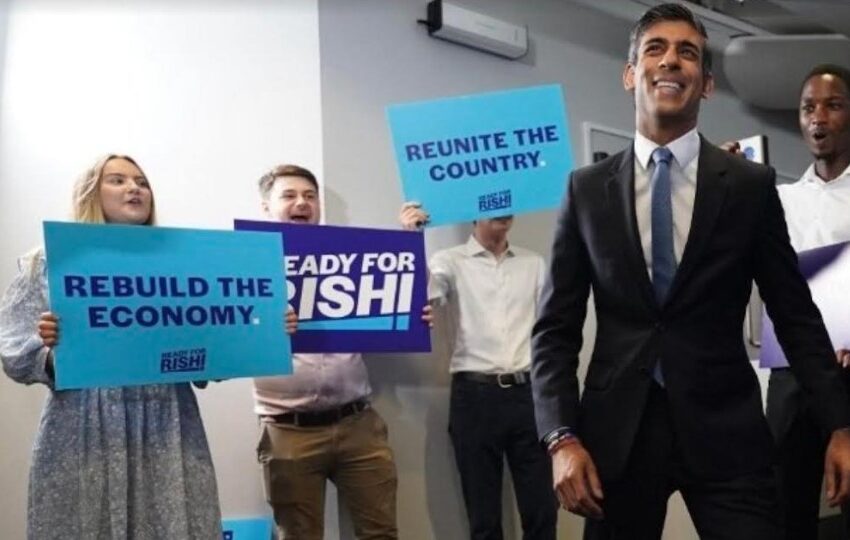 The race to be the next man or woman in No. 10 is drawing to a close as the final two candidates – Foreign Secretary Liz Truss and former Chancellor Rishi Sunak – come to the end of their campaigns to woo the Tory electorate. Over the next few days, registered members of the Conservative Party will be given ballots to vote for their preferred candidate for prime minister. StratNews Global looks at what has happened so far in the race, what are Sunak’s chances and what will it mean to have him in the top job.

Already five rounds of voting by Conservative MPs have produced two candidates, one of whom will be voted party leader. Between August 1 and August 5 ballots votes will be issued to the registered Tory party members across the country. No one is quite sure of their exact number, but it is said to be between 140,000 to 200,000. Voting closes on September 2 after which the ballots are counted, and the winner is expected to be announced on September 5. The winner becomes the Conservative party leader and the next prime minister.

How Do The Two Leaders Fare?

Currently things are not looking good for Sunak who himself has admitted that he is the “underdog” but that could change. A recent YouGov poll of Tory party members has shown Truss beating Sunak by 62% to 38%. However, Sunak has a number of things going for him: he is perceived as being sounder on all major issues than Truss, he is a committed Brexiteer – having voted ‘Leave’ in the 2016 referendum while she voted ‘Remain’ – and his social media campaign has been seen as slicker than hers. His “origin story” video where he talks about his mother coming to the UK in the 1960s has recorded over eight million views. Truss has been far more conservative and her film focusses little on her personal life but on her achievements. Her views do not match up to Sunak’s on social media.

So Why Is Truss Gaining Ground?

Truss is winning ground on a conventional sphere – the tabloid media. Unlike the US, television has limited utility for politicians in the UK and the decision-makers are seen to be the tabloid media. The Sun tabloid openly boasted that it was responsible for the victory of Conservative candidate John Major over Labour candidate Neil Kinnock in 1992. Major was perceived as dull and lifeless compared to the charismatic Kinnock and the latter’s loss was a shock upset. The Sun led a concerted campaign against Kinnock and the headline it ran after Major’s victory simply stated: ‘It’s The Sun Wot Won It.’

The power of the tabloids and what is dubbed as the Conservative party press, which includes The Times and The Daily Telegraph, seems largely to be supporting Truss. The Daily Mail has made little secret of where its sympathies lie by carrying a headline ‘Truss – Back me or it will be Rishi.’ But perhaps more than the media, Sunak faces a problem within the Conservative party known as the ‘BoJo camp.’ These MPs are causing problems for Sunak calling him a “snake in the grass” and “stabbing” former prime minister Boris Johnson in the back with his shock resignation while Truss is being seen as the loyalist. This has led to internal attacks on Sunak with Tory party insiders allegedly providing leaks to the press that he is not tough enough on Europe, and his economic policies are a disaster for the UK. Sunak has been condemned for refusing to cut taxes in favour of fiscal prudence while Truss has won favour for her pledge to “cut taxes from day one as prime minister.”

Could Rishi’s Origins Come in The Way?

This is the big question. Is Britain ready to embrace an Indian-origin PM? The answer to this question can be traced back to 2015 when London based commentator Rashmee Roshan Lall wrote about former prime minister David Cameron pushing Sunak to run from the safe Conservative seat of Richmond. Richmond had voted “Conservative for 105 years but it was also a county that was more than 95 per cent white, with only 122 ethnic South Asians reported to be living there at that time.” Though the county voted Conservative there was consternation with people repeating familiar phrases such as “I’m not racist but…” “He doesn’t fit in around here.”

The key word here is “fit in.” In the UK “fitting in” denotes that a candidate is of the right class, economic background and often colour (though the last goes unsaid). Though such attitudes may have relaxed Sunak has other problems which prevent him from fitting in. Sunak is Britain’s wealthiest cabinet minister and has made the Sunday Times rich list with an estimated wealth of £730 million. He is however in the wrong country. While US elections celebrate wealthy candidates, austerity is valued in the UK and Sunak’s wealth is causing strong emotions among people. The other more uncomfortable question is that of religion. Sunak, along with some other Indian-origin candidates, took his oath as MP on the Bhagavad Gita. This caused no problems then. But his insistence on the fact that he is a Hindu and his public declaration of Hindu values, such as refusing to eat beef, could cause some Tory party members to reflect. A number of these members are over 50, male, white and Christian. Will he “fit in” with them?

How Does A Sunak Victory Impact India?

Despite the reams of newsprint devoted to Sunak in the Indian media, it is unlikely that a Sunak-led British government will make much difference. Former prime minister Boris Johnson already has warmed up ties with Prime Minister Modi and the trajectory will remain much the same. Though India will continue to face irritants on climate change and there will be pressure from Sikh associations for the new PM to come down on “human rights abuses” by the Indian government, these issues will be of little to no consequence. It will however be interesting to see how much Sunak, as prime minister, will push the Indian government on Russia and the subject of sanctions? External Affairs Minister S Jaishankar had a testy exchange with Truss on the subject when she visited India in April and it’s very likely that Truss will raise the issue again if she becomes PM. How will Sunak approach this? This is worth waiting and watching out for.