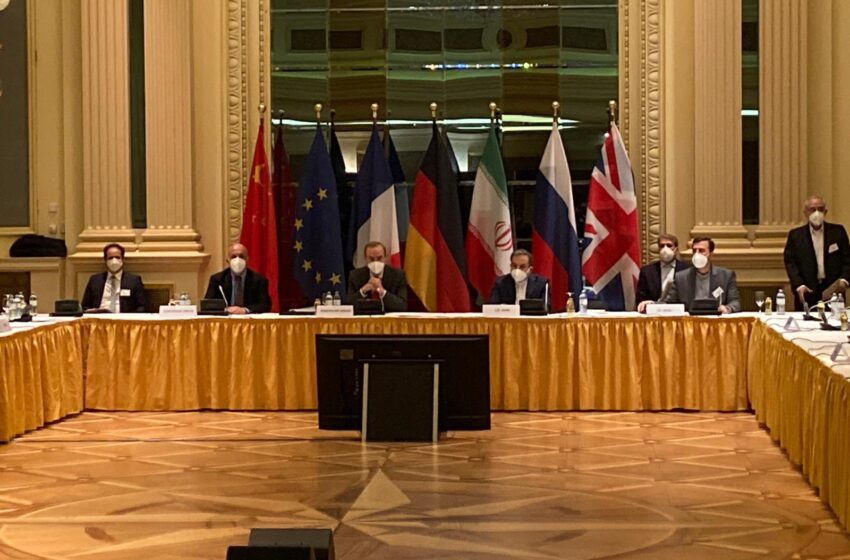 The Joint Commission of the JCPOA in session in Vienna on Tuesday. Source: Iran foreign ministry

NEW DELHI: “The talks were constructive,” on that cryptic but positive note from Iran, the first round of discussions in Vienna to break the stalemate on the Iran nuclear deal adjourned late on Tuesday but with the promise to resume on Friday.

The U.S. and Iranian delegations are staying in different hotels in the city—with officials from China, Russia the United Kingdom, France plus Germany believed to be shuttling between the hotels carrying messages and proposals. Mikhail Ulyanov, Russia’s envoy to the UN in Vienna, summed up the confusion when he tweeted, “The restoration of #JCPOA will not happen immediately. It will take some time. How long? Nobody knows. The most important thing after today’s meeting of the Joint Commission is that practical work towards achieving this goal has started.”

Two working groups have been set up, one to identify the sanctions the U.S. will need to lift against Iran, while the other will prioritise the steps Iran will need to take to bring its nuclear programme in line with the terms set out in the 2015 deal. The lack of a bigger outcome was not unexpected. Despite the air of optimism in the run-up to the Vienna talks, both the U.S. and Iran had been downplaying the possibility of a deal. Iran’s foreign minister Javad Zarif is not in Vienna, leaving it to Seyed Abbas Araghchi, deputy foreign minister, to handle matters. It suggests that Iran was in no hurry to make the first move.

The Iranian foreign ministry also made it clear that “no U.S. representative will take part in the meeting of the Joint Commission or the expert meetings related to it, and no direct or indirect talks with the U.S. are on the agenda of the Iranian delegation. The agenda is to lift the U.S.’s cruel sanctions against Iran and how to fulfil the (nuclear deal) undertakings by the other side,” Iranian foreign ministry spokesman Saeed Khatibzadeh told reporters in Tehran on Monday. Iran would welcome it if the U.S. chose to give up the “wrong path,” he added.

Iran is facing elections in June and with the hardliners seen as having the edge in the Majlis, any show of reconciliation would be seen as a sign of weakness. It isn’t just internal politics though. Rival Saudi Arabia appears determined to throw a spanner in the works. In the run up to the meeting, Saudi foreign minister Prince Faisal bin Farhan Al Saud told news channel France 24 on Sunday that Riyadh had been given assurances by its partners that any new deal would “address its concerns regarding the Iranian missile programme. We are confident that the international community will work to sort out the deficiencies in the JCPOA are eventually addressed and they will also work to address the regional instability that is caused by Iran’s activity.”

On the U.S. side the situation remains no less complicated. Special Envoy for Iran Robert Malley knows Iran well and helped negotiate the JCPOA in 2015, but 140 Congressmen have opposed any move towards conciliation with Iran. Little wonder state department spokesperson Ned Price was cautious, saying that Washington did not “anticipate an early or immediate breakthrough.” Pointing out that the “breakout time” – the time required by a nation to get enough weapons grade uranium to make a nuclear weapon – has reduced considerably for Iran since the 2015 deal was signed, Price warned that the U.S. had to be careful going forward.

“We certainly will not entertain unilateral gestures or concessions to induce Iran to a better place. Our goal at these talks in Vienna, again, is to set the stage for that mutual return to compliance. The original formulation is one that still holds today. It’s the limited lifting of sanctions, nuclear sanctions, in return for permanent and verifiable limits on Iran’s nuclear program.”

Price also added that no direct talks were taking place or scheduled to take place anytime soon between the U.S. and Iran.