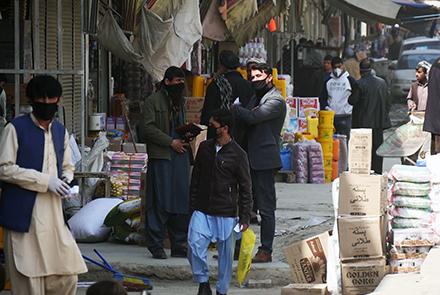 KABUL: A number of Afghans have accused businessmen of using the coronavirus threat to sell goods at unreasonably high prices and have called upon the government to act against the offenders.

Over the past two days, many in Kabul have been out shopping for food to guard against possible shortages. But fear of the coronavirus driving people to stock up on food items has caused prices to rise.

“What type government is this? They (government) say they want to control the market price but it is a useless control, they (government officials) just come and get an assurance from the shopkeeper that he will not sell high, but when they ask to see the receipts, the businessmen says – I don’t have any,” said Haji Khateb, a resident of Kabul.

“When the market controllers are here the price is good, and they sell flour for about 1,900 and 2,000 afghanis, but when the controller leaves the area, then again every shopkeeper starts selling what they want,” said Naeem Qureshi, another resident of Kabul.

Although authorities in charge of market regulation have made some efforts, those have not impacted food prices so far. A number of residents protested in front of the Kabul municipality against traders who price-gouge and hoard—a crime in Afghanistan. “If Corona doesn’t kill us today, be sure that starvation will,” said Shahram Rahmani, a Kabul resident.

“Greater profits and the use of people’s mental state for greater profits, is a crime and is punishable by the penal code,” said Arash Shaherpor, a lawyer.

President Ashraf Ghani says to stabilize the market, he has ordered 24,000 tons of wheat to be distributed to needy people from the state reserves. The borders will be open 24 hours a day for imports, he said.

“Today I ordered the distribution of 24,000 tons of wheat from government strategic reserves to vulnerable people, and the Afghan government has decided to allow about one thousand wagons of cooking oil to be available in our northern ports as soon as possible…,” said Ghani.

In the past two days, prices of foodstuff have skyrocketed, especially in Kabul. A 50 kg pack of flour that used to cost 1,600 afghanis a few days ago is now selling for up to 2,500 afghanis.