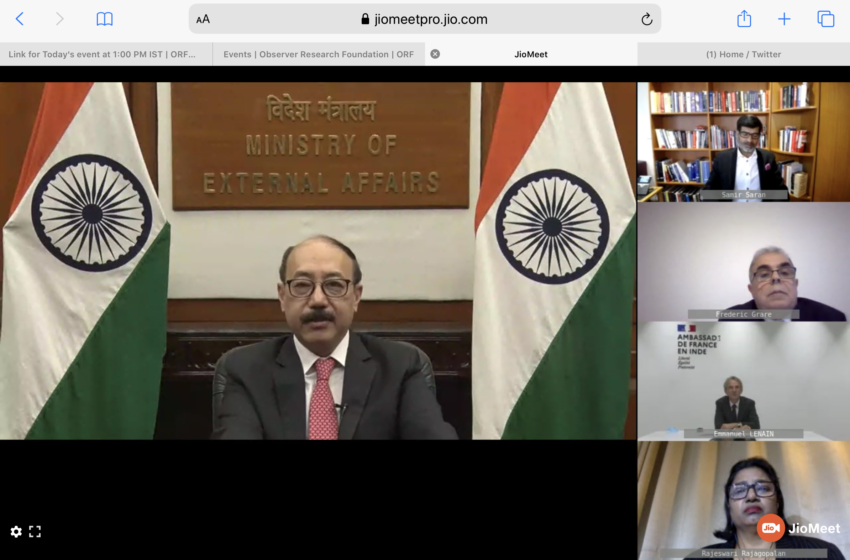 Foreign Secretary Harsh Vardhan Shringla (left) speaking at a workshop on the Indo-Pacific in New Delhi on Tuesday.

NEW DELHI: Foreign Secretary Harsh Vardhan Shringla has underscored India’s role as a net security provider, saying “We have sought security and freedom of navigation in the Indo-Pacific by becoming a net security provider–for instance in peacekeeping efforts or anti-piracy operations in the Gulf of Aden. Sharing what we can, in terms of equipment, training and exercises, we have built relationships with partner countries across the region.”

He was speaking at a workshop on India-Japan-France in the Indo-Pacific in Delhi on Tuesday. Describing France and Japan as “key actors” in the region, he invited them to join hands with India to “ensure the Indo-Pacific remains peaceful and open, taking into account needs and concerns of all of its inhabitants.”

In this context, Shringla made the point that India is already “active in networks such as the Quad, with the United States, Japan and Australia as participants, and the India-Japan-U.S., India-France-Australia and India-Indonesia-Australia trilateral arrangements offer cases in point.”

With French ambassador Emmanuel Lenain and Japan’s ambassador Satoshi Suzuki listening in, Shringla said: “An Indo-Pacific guided by norms and governed by rules, with freedom of navigation, open connectivity, and respect for the territorial integrity and sovereignty of all states, is an article of faith for India,” adding that “India has not just mainstreamed the expression “Indo-Pacific”, but has also encouraged others to perceive and define the region in its full extent.”

So could this be the precursor to a trilateral dialogue between India, France and Japan on the Indo-Pacific? Or perhaps the India-France-Australia dialogue launched around four months ago could be expanded to include Japan as well.

The French ambassador appeared to hint at the power of working together, noting: “We are building piece by piece a strategic triangle between Paris, Tokyo and Delhi committed to a rules-based Indo-Pacific order. We should now explore synergies among us.” and in an oblique reference to China’s muscle-flexing in the South China Sea, said, “in the maritime security, a key issue are the unilateral, non-cooperative policies of certain powers of the region”.

In his remarks before the foreign secretary spoke, Ambassador Suzuki said that the vision of a free, open and inclusive Indo-Pacific ‘requires collective efforts of like-minded countries like India and France” that have a shared vision of universal values such freedom, openness and inclusiveness.

He assured that Japan’s commitment to the Indo-Pacific had not changed in the administration of Prime Minister Yoshihide Suga.