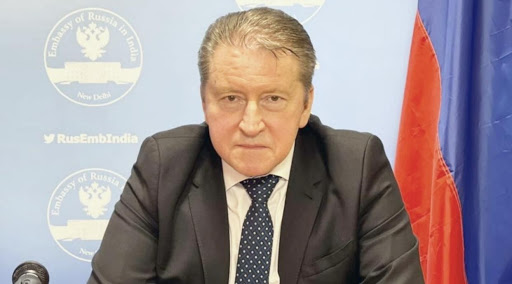 NEW DELHI: Let the Biden administration publicly announce its plans but we don’t recognise unilateral sanctions, Russia’s Ambassador to India Nikolay R. Kudashev has said on the Countering America’s Adversaries Through Sanctions Act (CAATSA) imposed on NATO member Turkey for purchase of Russia’s S-400 missile defence system. At a press briefing, the envoy said “India’s position is also crystal clear, that no sanctions are acknowledged other than those applied by the UN Security Council,” adding, “our ties can withstand the current challenges.” India is expecting to start taking delivery of the defence systems in 2021 (as part of a $5 billion deal signed in 2018) and it’s unclear whether the Biden administration will grant Delhi a waiver. Last week, U.S. Assistant Secretary of State for Political-Military Affairs R. Clarke Cooper told reporters: “The CAATSA sanctions are not designed to be punitive to a partner and ally that has got a sustainment issue or an operation or maintenance issue. We’re certainly not looking to disrupt that. We don’t want a partner’s sovereign defence capabilities to be degraded or to put their readiness at risk.”

Russia’s Ambassador to India and Deputy Chief of Mission (DCM) Roman N. Babushkin spoke virtually to the media on India-Russia ties and the ‘Outcomes of 2020 and Prospects for 2021’. The diplomats played down Foreign Minister Sergey Lavrov’s December 8 remarks to a think tank that the Quad is a ‘devious’ policy by Western powers to engage India in ‘anti-China games’ and the sharp Indian response. The envoy reiterated: “It’s not the Russian habit to interfere in bilateral ties,” while his deputy added, “we see your apprehensions about China that are guiding India’s policy towards some mechanisms in the region. Russia’s principled position is unequivocally aimed to create and facilitate a positive atmosphere, to create trust between the two Asian giants. Russia is not taking sides. It maintains close and independent relations with both.” But Babushkin was also unambiguous about the Quad, describing it as “attempts by some countries to create containment… in the region that threaten ASEAN centrality, unity. That means the Quad will be detrimental to inclusive dialogue in the region.” Speaking to StratNews on December 10 on Lavrov’s comments, Russia expert and Distinguished Fellow, ORF, Nandan Unnikrishnan had said , “this cuts both ways. Are we as sensitive to Russia’s national interest as we want them to be towards us?”

Speaking on the 10th anniversary of ties being elevated to a special and privileged strategic partnership on December 21, 2010, Ambassador Kudashev acknowledged the annual summit between PM Narendra Modi and President Vladimir Putin has been put off till next year as have the Ka-226 helicopter and AK-203 rifle production deals, though the envoy said the supply of S-400s is “advancing well”.