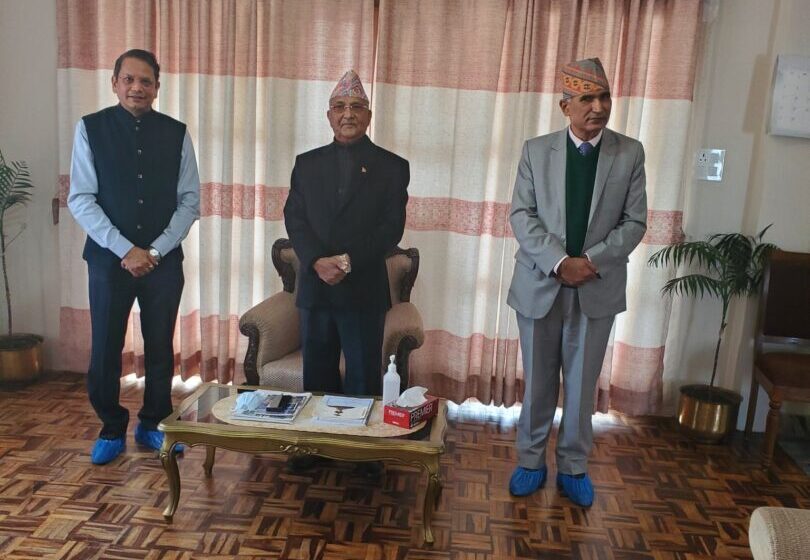 NEW DELHI: After the diplomatic and military outreach to Nepal has come the political outreach. On Thursday, Vijay Chauthaiwale who heads the foreign affairs department of the ruling Bharatiya Janata Party (BJP) called on Prime Minister K.P. Sharma Oli and the newly minted finance minister Bishnu Poudel in Kathmandu.

This outreach is significant not merely because of the efforts being made to repair the bilateral rift but also because of the deep inroads the Community Party of China has made into Nepal’s polity, cutting across ideologies.

Chauthaiwale’s visit is part of the on-going efforts to mend fences with PM Oli, said sources. Shortly after his meeting with Oli, Chauthaiwale tweeted, “Honoured to call on Rt. Hon. PM @kpsharmaoli ji today. It’s a pleasure to be in Kathmandu on the invitation of General Secretary of Nepal Communist Party and Finance Minister Shri Bishnu Poudel ji.

With India-Nepal making efforts to get ties back on track, the decision to establish an ‘air bubble’ was announced on Thursday. There have been no flights between India and Nepal for eight months since the pandemic struck.

Even as India established ‘air bubbles’ with other countries, the one with Nepal had to wait for the frostiness that had crept into bilateral relations following their territorial dispute to thaw. Foreign secretary Harsh Vardhan Shringla took up the matter with the Nepalese during his Kathmandu visit late last month stressing on the need for people-to-people connectivity, said sources.

The outreach by the BJP to Oli who co-chairs the Nepal Communist Party (NCP) with Pushpa Kamal Dahal ‘Prachanda’ and Bishnu Poudel who is the party general secretary is noteworthy. More so in the context of the growing ties between the NCP and the CPC. In June this year, a large number of NCP leaders had participated in a meeting with CPC leaders via video conference, raising many eyebrows.

Sources said Chauthaiwale’s meeting was part of the on-going efforts to mend ties. Nepali newspaper My Republica reported that bilateral relations were discussed during the meeting which took place at the Nepalese PM’s official residence in Baluwatar.

The meeting also happened in the backdrop of the intense power struggle that’s been on for several months between Oli and Dahal. Poudel, a close and trustworthy lieutenant of PM Ol,i is also said to enjoy a good rapport with Dahal. Poudel was appointed Nepal’s finance minister in October.

The thaw in bilateral relations is also evident as the two sides have resumed their regular interactions at the official level, On Thursday, the 8th meeting of the joint working group on Nepal-India Cooperation in the Power Sector was held to discuss cross-border transmission lines and power trade as well as Indian investments in the Nepali hydropower and solar sectors were discussed at this meeting.

Earlier in the week the commerce secretaries of the two sides met under the rubric of the India-Nepal Inter-Governmental Committee on trade and Transit. This bilateral mechanism reviews and lays down the future roadmap for economic ties and bilateral trade.