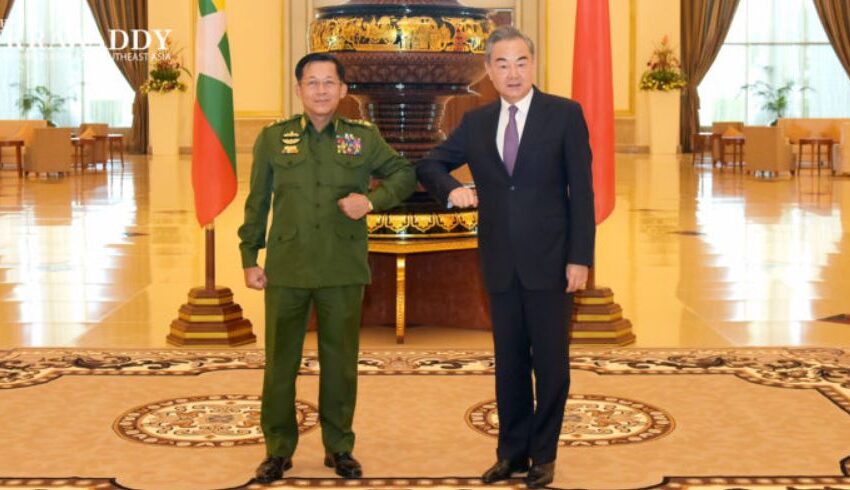 Politicians from the ousted National League for Democracy (NLD) who have stayed in touch with Chinese officials since the Feb. 1 coup say Beijing was convinced in advance of the Myanmar military’s intention to overthrow the country’s elected government. These NLD figures—who have remained largely aloof from the activities of the shadow National Unity Government (NUG) set up by ousted MPs and others—also say that Beijing was skeptical from the outset of the military’s flimsy rationale for the takeover, and believe that China is rapidly losing confidence in coup maker Min Aung Hlaing’s ability to assert full control over the country. And with the violence and instability in Myanmar worsening by the day, they are increasingly asking themselves why Beijing did nothing to prevent the coup in the first place.

Moreover, this group is convinced that China would still support a scenario in which the junta reined in its violence and entered into negotiations with ousted government leaders.

In the days following the military’s seizure of power, Myanmar activists and others in the country began almost immediately to express dismay at Beijing’s failure to condemn the coup, and the country witnessed its largest anti-China protests in decades. Many now say it will take years to repair the damage done to China’s image in the eyes of the Myanmar people.

(Aside from China, it is worth asking who else had intelligence that a coup was imminent in Myanmar. Several embassies with networks in Myanmar are highly likely to have had such knowledge.)

Well-informed sources and some mid-ranking NLD officials told The Irrawaddy they believe Chinese leaders including Foreign Minister Wang Yi had concerns following November’s election, and even earlier, that a coup was inevitable. These sources say the Chinese knew it was coming, and had reservations about the military’s motivations—but did nothing to prevent it.

The visit was seen as highly significant; Wang was the most senior Chinese official to visit Myanmar since the NLD’s landslide victory in November’s general election.

The Chinese Ministry of Foreign Affairs stated that Wang’s visit demonstrated “China’s anticipation and support for the successful formation of Myanmar’s new government as well as Myanmar’s efforts to realize national rejuvenation and lasting peace and stability along the development path independently chosen by the country and in the long-term interests of the people of Myanmar.” 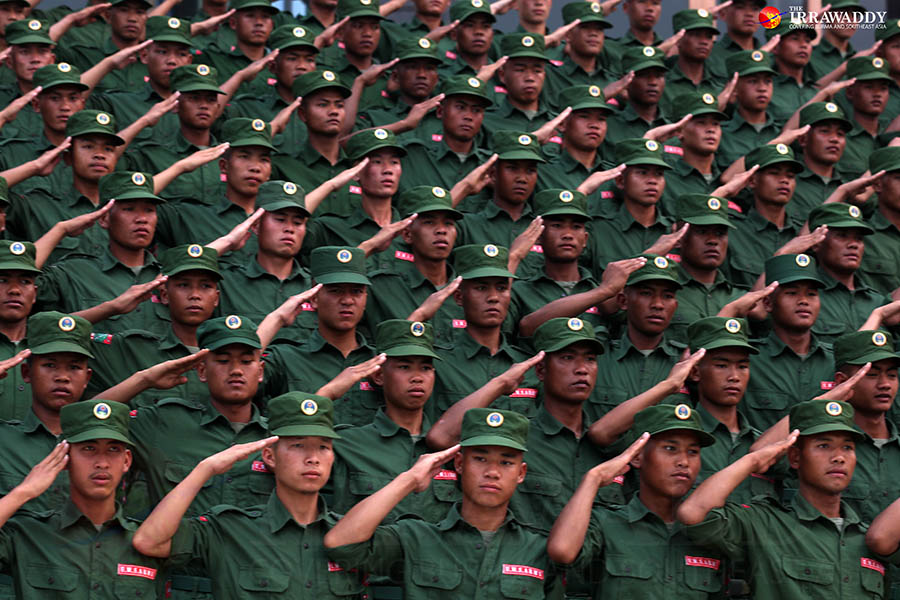 United Wa State Army troops at a celebration of the armed group’s 30th anniversary in Panghsang, the capital of the Wa Self-Administered Region, in Shan State in 2019. (Photo: The Irrawaddy)

Senior General Min Aung Hlaing, who was then—unbeknownst to the wider world—preparing to stage his coup, also met the Chinese foreign minister.

To the surprise of Wang and other Chinese officials, the senior general took the opportunity to share the military’s “findings” from its examination of the country’s voter lists, saying it had uncovered mistakes and inaccuracies that could have led to opportunities to vote “more than once” and “voting malpractice”. (Min Aung Hlaing also shared his views with Yohei Sasakawa, the chairman of Japan’s Nippon Foundation, as well as Russian officials. Sasakawa is said to be viewed as a “godfather” figure by Min Aung Hlaing.)

The senior general also told Wang that Daw Aung San Suu Kyi was corrupt and informed the visiting Chinese official of his suspicions of malpractice at the State Counselor’s Daw Khin Kyi Foundation, as well as his belief that she had mismanaged election funds.

Knowing Myanmar generals’ history of corruption and greed, the Chinese were bemused but listened to their host’s marathon whimpering session. However, some military officers who attended the meeting recalled that it was clear from the Chinese minister’s body language that he did not agree with several of Min Aung Hlaing’s accusations.

Finally, Snr-Gen Min Aung Hlaing told the Chinese officials that the popularity of the NLD was on the decline, totally ignoring the fact that the party had won another landslide victory in the general election just two months earlier.

Interestingly, prior to the election, Min Aung Hlaing relied heavily on assessments of the NLD and predictions of the election’s outcome put together by pro-junta “scholars”, the military’s intelligence units and regional commanders. They had concluded with certainty that there was no way the NLD would repeat its previous landslide victories.

However, China had formed a different view even prior to the November election. Beijing foresaw that the NLD would win again, but they also saw that the military wouldn’t accept such an outcome. The question Beijing faced was, if a serious political conflict arose, with whom would China side?

Prior to the election, China had clearly been betting on the NLD and Daw Aung San Suu Kyi.

Xi’s bet on the NLD 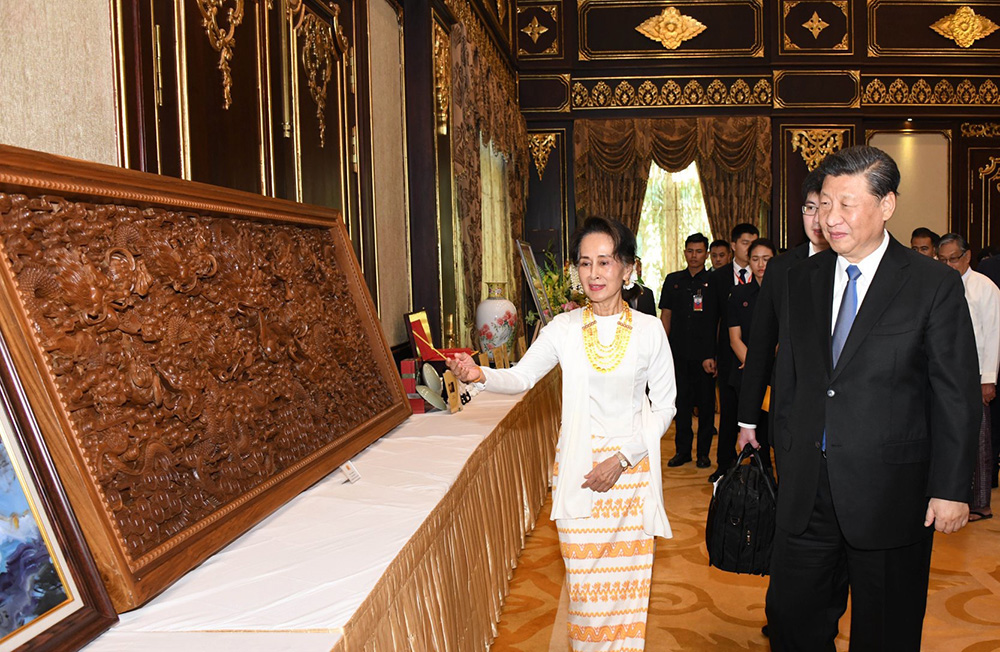 Just over four years earlier, he had made a bold move by inviting the then opposition leader and lawmaker to Beijing months before the 2015 election. The NLD won a decisive landslide victory in the vote held in November of that year.

Xi’s visit was seen as a calculated move by Beijing to assert itself in the rapidly changing political landscape in Myanmar. Why? China had backed Daw Aung San Suu Kyi’s government and wanted to see it win again in the election of November 2020.

At the time, some Chinese officials accompanying Xi confided to Myanmar observers that Beijing believed in Daw Aung San Suu Kyi, as she kept her promises on Chinese investments and projects, and felt that Myanmar would be better off if she won a second term.

What about Myanmar’s generals? Chinese officials commented bluntly at the time that the Tatmadaw’s top brass were corrupt and unreliable. This is clear evidence of the mutual distrust between Myanmar’s military leaders and Beijing.

Indeed, the generals in Naypyitaw have long been wary of China’s influence over the ethnic rebels and its interference there. The irony is that Beijing publicly advocates a noninterference policy while heavily backing ethnic rebels in Myanmar’s north.

For the two years prior to the coup Snr-Gen Min Aung Hlaing had expressed concern over Beijing’s support for groups based along the northern border in the form of arms sales. These ethnic rebel groups were in China’s pocket; proof could be seen in the numerous statements they issued on welcoming Xi’s visit to Myanmar.

Now, Xi will have to decide what sort of relationship he wants with coup leader Min Aung Hlaing.

In any case, Beijing has faced widespread criticism from people inside and outside of Myanmar for failing to condemn the coup (as did the rest of Myanmar’s neighbors). This has upset China. NLD politicians have confidentially asked China to do more to stop the violence and warned that if Myanmar collapses into chaos there would be significant destabilizing impacts on its neighbors, posing a strategic headache for China, India and Thailand.

At the same time, Chinese officials are increasingly worried that the anti-junta movement, including the Civil Disobedience Movement (CDM), the Committee Representing Pyidaungsu Hluttaw (CRPH) and the NUG are being funded by Western NGOs and donors.

In June, Chinese Ambassador to Myanmar Chen Hai met Snr-Gen Min Aung Hlaing before the China-ASEAN foreign ministers’ meeting to commemorate 30 years of relations between Beijing and the regional bloc.

During their meeting, Chen said China supported the implementation of ASEAN engagement with Myanmar and hoped for the restoration of peace and stability. 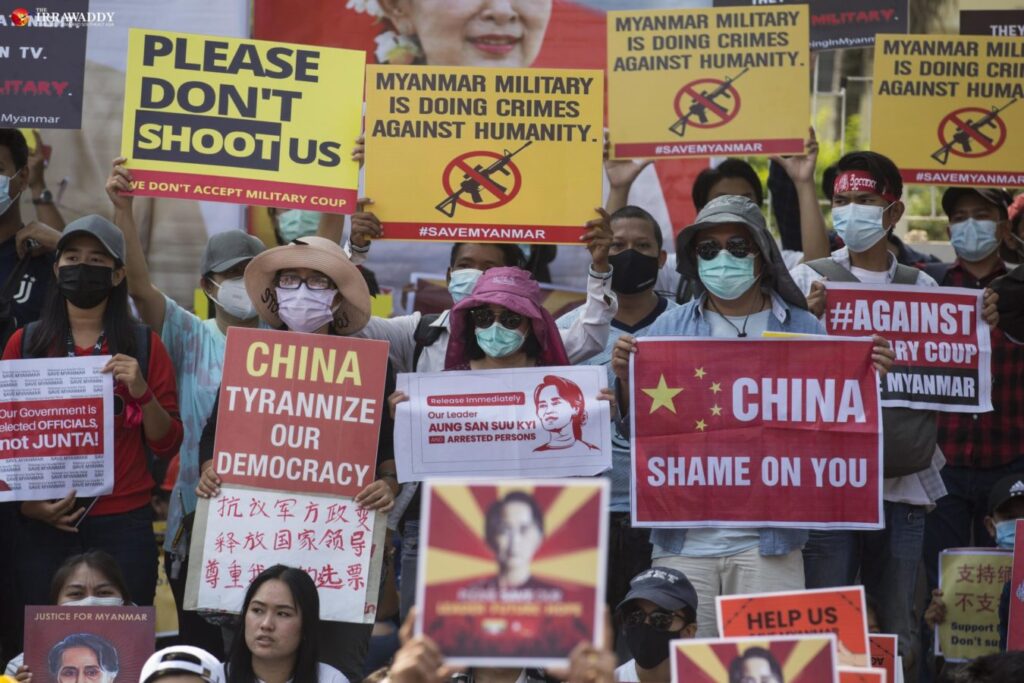 Anti-regime protesters in front of the Chinese Embassy in Yangon in February. (Photo: The Irrawaddy)

According to a Chinese Embassy post on Facebook, Chen stressed that China, as Myanmar’s neighbor, “will continue to play a constructive role”. Its statement said: “China sincerely hopes for the earlier restoration of peace and stability in Myanmar and supports the implementation of [the] consensus by ASEAN and Myanmar.”

The reference to the coup maker as the “Myanmar leader” angered many social media users.

This week, Wang said the international community should refrain from imposing sanctions on the junta, describing such actions as “inappropriate intervention”. The Chinese state councillor instead urged Myanmar to settle its political crisis through internal dialogue and reconciliation.

Some NLD politicians who claim to have nothing to do with the NUG and CRPH say Beijing is losing its confidence in coup maker Min Aung Hlaing.

If Snr-Gen Min Aung Hlaing had succeeded in staging the coup and consolidating power, China wouldn’t be much bothered. Beijing would simply adjust and work with the new regime. (As it did in Thailand in 2014, after the military staged a coup there. The Chinese ambassador to Bangkok met the coup leaders and the friendship between the two countries strengthened. Unlike the coup in Myanmar, the Thai coup of 2014 was successful.) Today, the Myanmar military is still trying to consolidate its grip on power amid sustained resistance.

After months of protests, violence, chaos and instability, and with humanitarian and health crises looming, the regime’s allies including China are unsure how to support Min Aung Hlaing. At the outset, Myanmar’s military leaders assured the Chinese, Japanese and key allies that they would be able to contain the anti-coup uprising but failed to anticipate the scale of the resistance.

Moreover, China was never convinced by Snr-Gen Min Aung Hlaing’s accusation of corruption against Daw Aung San Suu Kyi and the Daw Khin Kyi Foundation. China has made its own assessment of these cases and found nothing irregular, according to informed sources in Yangon. One NLD politician summed up the feeling: “The trouble with Min Aung Hlaing is, he was in the wrong from the start.”

Thus, China has lost confidence in Snr-Gen Min Aung Hlaing. Its view is that under his rule, Myanmar will only see more trouble and a prolonged period of instability.

China remains one of the biggest investors in Myanmar, having signed several major Belt and Road Initiative projects with the ousted government. Bejing’s political influence in Myanmar is not insignificant.

China knows its geostrategic interests will be threatened if Myanmar’s generals fail to successfully assert full control, and that the country is in danger of descending into full-scale civil war and chaos.

Beijing is the only capital that can intervene and put real pressure on the junta to refrain from violence and negotiate with the ousted government, lamented some key NLD leaders who developed close relations with Chinese officials over the past five years.

But they also look at Beijing’s failure to stop the coup and ask, why?

Ultimately, NLD politicians and some analysts in Myanmar are convinced that China still wants to see mediation and some form of negotiation between the coup maker and the detained NLD leaders, including Daw Aung San Suu Kyi.

Myanmar Hospitals Run Out of Beds Amid COVID-19 Surge