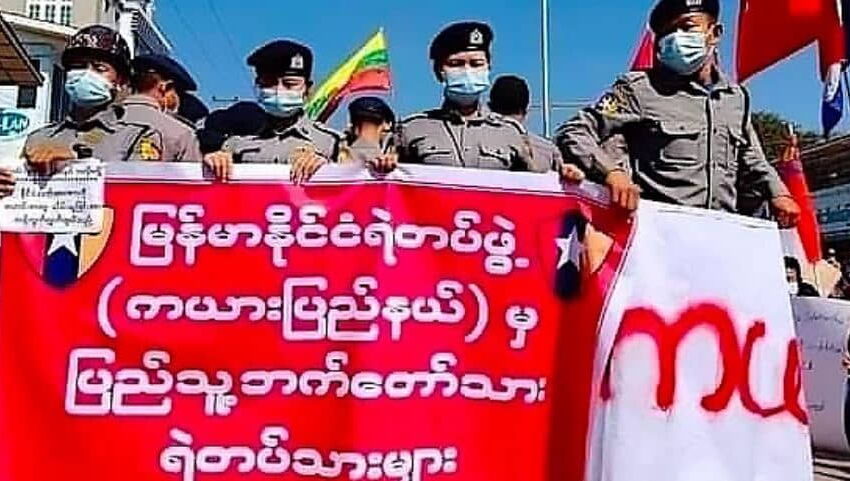 Striking police officers in Kayah State have formed a police force which will work together with anti-regime groups to fight military rule. It is the first such shadow police force to be formed in Myanmar since the junta’s February 1 coup.

It consists of 320 police who defected from the junta-controlled Home Affairs Ministry after the coup. Most are from Kayah State and Pekon Township in southern Shan State, but a few are police from central Myanmar who have taken refuge in Kayah in southeastern Myanmar. 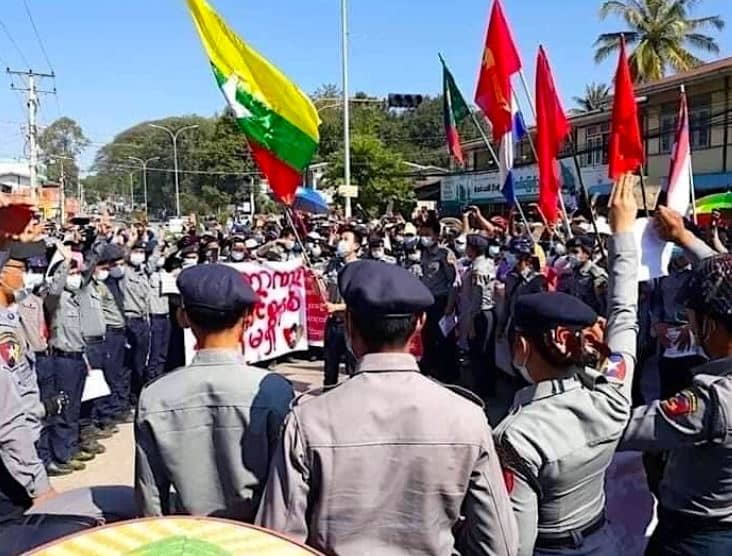 “We will contribute what we can during the revolution. We will provide security when we can occupy areas. We will provide help for displaced people. We will act in line with human rights if we catch prisoners of war. We are trying our best to serve the Karenni people,” said U Ne Ye Zin, the information officer for the KSP.

The KSCC was formed in April and comprises elected lawmakers and representatives of political parties, ethnic armed organizations and civil society groups, including the long-standing Karenni National Progressive Party (KNPP).

The council is intended to act as a parallel administration to the military regime and to run the administrative, legislative and judicial mechanisms in Kayah. The KSCC is in the process of negotiating with the shadow National Unity Government for cooperation and collaboration in fighting the junta.

The KSP will act as a law enforcement organization under the KSCC to provide security for the people and protect public interests in seven townships across Kayah State, as well as Pekon, where there is a high ethnic Karenni population, said the KSCC announcement.

“We will not be able to serve the people to the full as we are still in a revolution period now. We are providing capacity-building and lecturing people about human rights and federal democracy. We aim to serve as a normal law enforcement organization in the future,” said U Ne Ye Zin.

He declined to comment on the structure and detailed responsibilities of the KSP, citing security concerns. Police majors are the highest rank to have deserted the Home Affairs Ministry to join the KSP. “They will focus mainly on relief work and helping displaced persons. And they will enforce laws adopted by Karenni groups in communities. They will not fight on the front line. The KNDF is responsible for the fighting,” said a KNDF spokesman.

Apart from providing security for refugees, the KSP will also be responsible for junta soldiers captured by the KNDF. Prisoners of war will be treated in line with international laws. The KSP will also disseminate the concept of federalism to the public, the KNDF said.

Junta forces have been clashing with Karenni armed groups in Loikaw, Demoso, Hpruso, and Bawlake townships in Kayah State, as well as in Pekon in Shan State. The regime has also been arresting Karenni activists and striking government employees. The KSP will start operations in the rural parts of Kayah controlled by the KNDP, KNPP and local People’s Defense Forces.