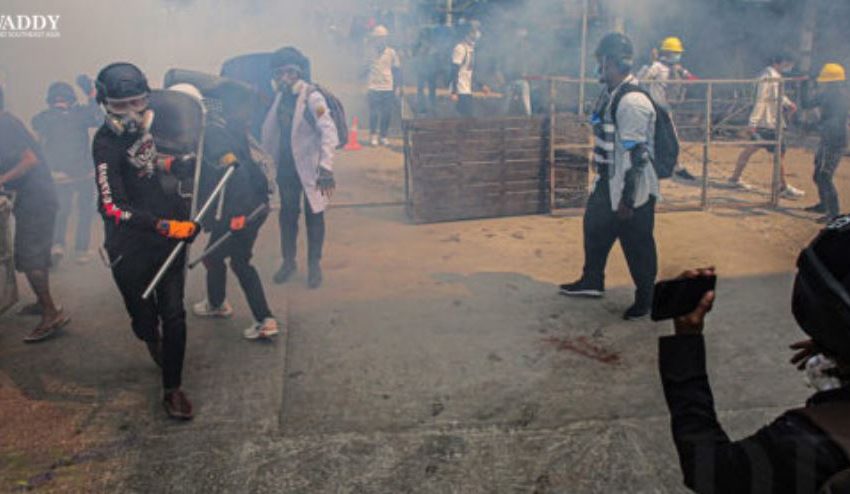 A journalist covers a crackdown on an anti-regime demonstration in Mandalay in February. (Photo: The Irrawaddy)

It would not be overstating the case to say that press freedom has been completely extinguished in Myanmar, with almost all independent journalists forced to work undercover, their newsrooms closed, living with the daily threat of raids, arrest, violence and lawsuits.

Since the military takeover, the regime has targeted journalists in an effort to suppress coverage of its lethal crackdowns on pro-democracy protesters, dragging the media landscape back to the pre-reform era.

Reversing the gains made since 2013, when the semi-civilian government allowed the circulation of independent private newspapers for the first time in five decades, no major independent print media are operating under the junta’s constant pressure and raids. All independent TV broadcasters have been taken off the air, leaving only propaganda mouthpieces and entertainment channels.

The junta has also warned citizens to take down satellite dishes, which could enable access to anti-regime protest news from independent media outlets. Broadband internet and mobile data access have been cut off, and regime forces regularly seize mobile phones during raids and random roadside inspections, further curbing the flow of information.

More than 80 journalists have been arrested while reporting on anti-regime protests since the coup. Some have been released, but many are still detained and face charges under Article 505(a) of the Penal Code, which criminalizes publishing or circulating comments that cause fear or spread false news. Those convicted face a maximum of three years’ imprisonment 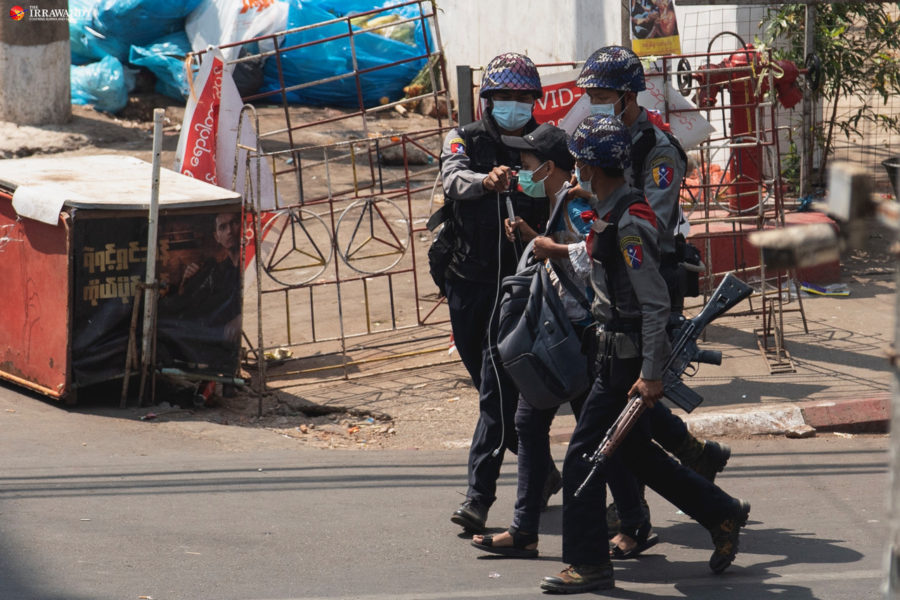 Ma Kay Zon Nway from Myanmar Now is detained by police while covering a protest in Myaynigone, Yangon in February. (Photo: The Irrawaddy)

Reporters Without Borders, the Paris-based media freedom watchdog group, stated in a recent report that by resuming the grim practices of the junta that ruled until February 2011, including media closures and the mass arrests of journalists, the new regime had set press freedom in Myanmar back 10 years.

As recently as Sunday, one day ahead of World Press Freedom Day, the Myitkyina Journal, a local independent weekly based in Kachin State’s capital Myitkyina, announced that the junta had revoked its operating license. Three of its reporters are detained and facing charges.

The junta’s information ministry claimed the journal had harmed the country’s security, tranquility and rule of law and incited riots through its reporting, in a letter sent to the media outlet.

“What we were doing was reporting the true events on the ground. Forcing us to shut down is the same as closing the ears and eyes of the people and choking off the flow of information in the [Kachin] state,” said Seng Mai, the editor-in-chief of the Myitkyina Journal.

The junta has offered the same justification—widely dismissed as ridiculous—to revoke the operating licenses of Myanmar Now, 7Day News, Mizzima, Democratic Voice of Burma (DVB) and Khit Thit Media, and has raided some of their offices and confiscated property. With the exception of 7Day News, they continue to publish online. The regime has also sued The Irrawaddy as an organization under Article 505(a) for “disregarding” the armed forces in its reporting on the ongoing anti-regime protests.

The regime’s announcements, raids and lawsuits have forced many independent journalists into hiding, and the rest are keeping a low profile.

“On this year’s World Press Freedom Day, the media landscape in Myanmar is so saddening,” Seng Mai said.

“Instead of being able to gather news on the ground, journalists have been forced to go underground to continue our work,” she said.

The seven-year-old Myitkyina Journal has the biggest online and print audiences in Kachin State. However, Seng Mai said that due to concerns over the security of staff the Journal had decided to stop operations amid the junta’s intensifying crackdowns, arrests and violence against not only reporters but also their family members and relatives.

In recent weeks, the junta has detained the family members of a number of journalists including freelance reporters and photographers. In Bago Region, the wife and daughter of locally based reporter Ko Than Win Naing were arrested on April 19.

On April 24, writer and media trainer Ma Tu Tu Tha, her son, brother and one of their friends were arrested by the junta’s troops. Ma Tu Tu Tha was formerly editor-in-chief of the Thanlyin Post, a local weekly journal, and once worked for The Irrawaddy (Burmese Edition).

On the same day, soldiers and police raided the house of a former cameraman for DVB, Ko Thura Soe, and arrested him. On April 27, the Voice of Myanmar (VOM) News editor-in-chief U Nay Myo Linn and a reporter were arrested in Mandalay, leading the online news page to suspend its operations. Riot police and soldiers beat civilians during a crackdown on anti-regime protesters in Mandalay. (Photo: The Irrawaddy)

They could not find the chief editor at the house and instead detained his brother-in-law, Salai Robert.

On May 1, junta forces arrested the husband of journalist Ma Thuzar after failing to find her during a raid on their home in Yangon.

Diplomatic missions to Myanmar including those of the US, UK and EU called for the immediate release of all media workers, the establishment of freedom of information and communication, and for the end of all internet restrictions in Myanmar, in a joint statement on World Press Freedom Day.

“While journalists and media workers have become a target of repression in Myanmar, we commend the efforts of those striving to ensure access to accurate information,” the statement reads.