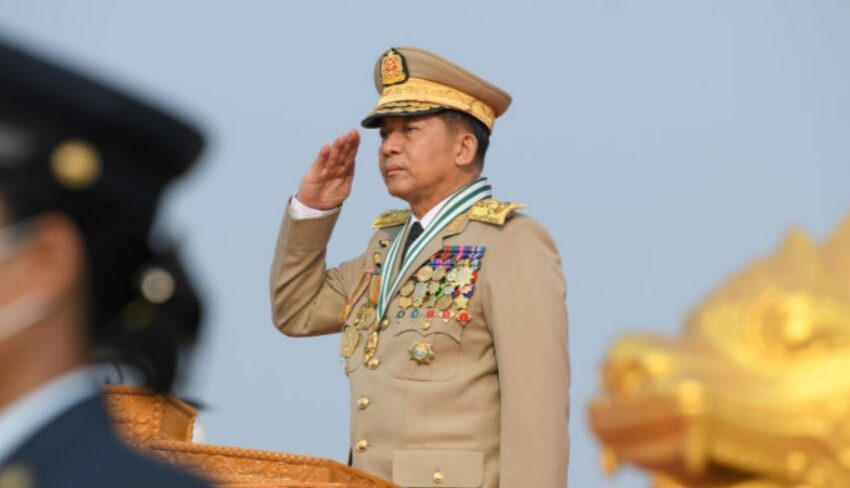 Amid rising armed resistance against his rule in Myanmar, junta leader Min Aung Hlaing has invited the leaders of ethnic armed organizations (EAOs) for talks “to end armed conflict”.

However, given his recent statement that his regime would not hold talks with the opposition, the shadow National Unity Government and its armed wing People’s Defence Forces and other resistance forces are believed to be excluded.

Min Aung Hlaing’s request for talks came as the regime faces the most difficulty since its coup last year and it cannot control the country.

Furthermore, the armed wings of some powerful EAOs, like the Karen National Union (KNU) and Kachin Independence Organization (KIO), are fighting alongside resistance forces against regime troops, inflicting heavy casualties.

Some other EAOs are secretly supporting resistance forces.

In his televised address aired on Friday, the junta chief, who is responsible for brutal killings, shelling, airstrikes and atrocities against civilians, said he had invited EAO leaders to mark “the Year for Peace”.

“I will see all of you personally. There will be more meetings if needed,” he said, adding that he would talk to them “openly and sincerely for the sake of the peace”.

The junta leader urged the EAO leaders to register for the meeting by May 9 and the meeting date will be announced later.

Myanmar has around 20 EAOs and only 10 have signed the ceasefire agreement. Powerful organizations like the KIO and Arakan Army have not signed the agreement. The KNU is one of the signatories but its armed wing, the Karen National Liberation Army, is fighting the regime.

Phado Saw Taw Nee, the KNU’s spokesman, told The Irrawaddy that the invitation for talks was hard to believe given the regime’s ongoing offensive and heavy-handed responses like airstrikes.

“We are not saying no to peace talks but given the previous experience, the norms they hold for peace don’t work,” he said, referring to the military’s refusals to consider troop withdrawals and a departure from politics.

The junta leader’s offer comes four days after he gave honorary titles to some EAO leaders, including Saw Mutu Say Poe, chairman of the KNU. However, some suggested that Min Aung Hlaing has attempted to drive a wedge by awarding the KNU chief as the KNU is engaged in fierce fighting with the regime.

As of Thursday, junta forces had killed at least 1,779 and arrested more than 13,000 people, including elected leaders, students, activists, politicians and protesters, across the country.