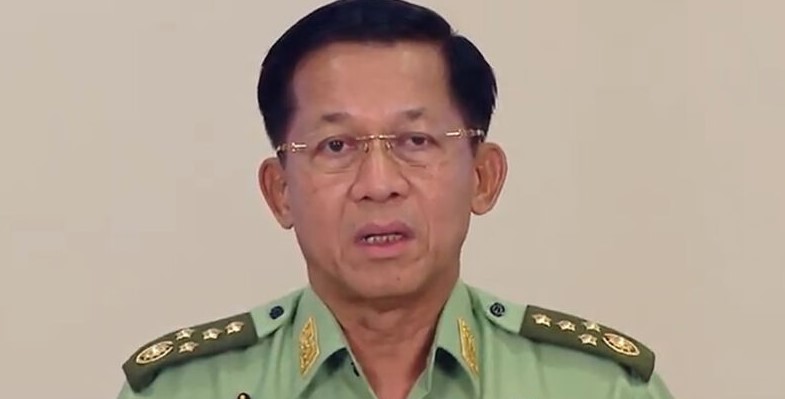 It must be embarrassing for Myanmar regime chief Min Aung Hlaing when the top diplomat from the foreign country he relies upon most declines to pay him a visit—particularly if the diplomat is already in Myanmar.

But that’s exactly what happened over the weekend and early this week, as visiting Chinese Foreign Minister Wang Yi failed to meet Min Aung Hlaing during his stay in Myanmar.

Wang, the most senior Chinese diplomat to visit Myanmar since the coup last year, arrived in the country’s UNESCO World Heritage Site of Bagan in Mandalay Region on Saturday and co-chaired the 7th Lancang-Mekong Cooperation Foreign Ministers’ meeting on Monday.

During his three-day visit, the most senior junta official he met was Foreign Minister Wunna Maung Lwin, according to China’s Ministry of Foreign Affairs.

The lack of a meeting between Wang and the coup leader is notable, given that Beijing has not only refused to denounce Min Aung Hlaing’s coup but has acted, along with Russia, to provide diplomatic cover at the UN for the junta, which has killed more than 2,000 people since the takeover.

The last time Wang met Min Aung Hlaing was in January last year during the minister’s visit to Myanmar a few weeks before the February 2021 coup.

Min Aung Hlaing has been ostracized internationally since the coup for his bloody response to protesters against his regime. He has even been barred from attending summits by the Association of Southeast Asian Nations (ASEAN), of which Myanmar is a member state.

Internationally, his regime has received very little recognition and many countries have kept their distance from it. They fear meetings with the coup leader could be used as PR tools by the regime, which craves legitimacy.

Even China is wary of such meetings.

On Monday, when Wang was in Bagan, Chinese government mouthpiece Global Times quoted a director from the Chinese government-controlled Center for Southeast Asian Studies at the Chinese Academy of Social Sciences in Beijing as saying that the foreign minister’s visit was for the purpose of attending the Lancang-Mekong Cooperation Foreign Ministers’ meeting rather than to engage in bilateral talks and “does not hint at China ‘recognizing’ the current administration”.

China has a number of infrastructure projects in Myanmar such as a rail line linking China’s Yunnan Province with a deep water port in Kyaukphyu, Rakhine State in western Myanmar that will give China coveted access to the Indian Ocean.

Recently, China-backed projects in Myanmar have come under attack from anti-regime resistance forces and public opinion on China in the country has been tarnished like never before due to Beijing’s failure to denounce the coup.

The only companions Min Aung Hlaing has found so far—and rushed to extend hearty welcomes to—are some military officials from Russia, one of the regime’s arms suppliers, as well as Cambodian Prime Minister Hun Sen, who is the current ASEAN chairman, and his envoy for Myanmar.

His eagerness to receive any outside visitor as Myanmar’s “ruling figure” was evident in April this year when Min Aung Hlaing welcomed the President of Tatarstan, a republic in Russia with a population of some 3 million, at the Credentials Hall in Naypyitaw. He extended his hospitality by hosting a luncheon for the Tatarstan delegation.

While he failed to meet with the junta chief this time, the Chinese foreign minister attempted to appease Min Aung Hlaing with a reaffirmation of Beijing’s continued support for his regime.

In his meeting with his Myanmar counterpart on Sunday, Wang said, “Beijing will support Naypyitaw in safeguarding the country’s legitimate interests, as well as its national dignity on international occasions.”

Furthermore, in Bagan, the Chinese foreign minister told Cambodian Foreign Minister Prak Sokhonn, who is the ASEAN Special Envoy on Myanmar tasked with mediating the country’s crisis, that China will help the bloc push Myanmar for democratization while encouraging the grouping to implement its peace plan for the country. Among the plan’s key points are a call for dialogue among all concerned parties and the immediate cessation of violence. With the regime’s ongoing atrocities, including extrajudicial killings and the torching of villages, ASEAN has failed to convince the junta to implement the plan.