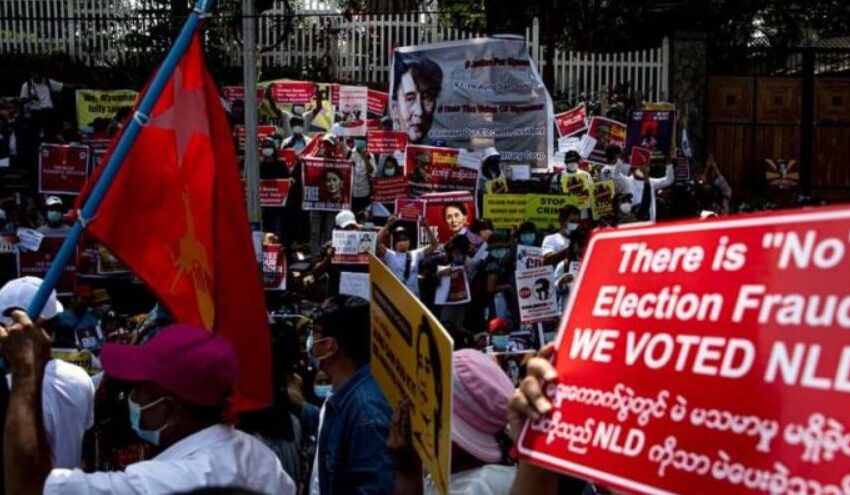 A protest is staged against the military coup in Yangon on Feb. 14. (Photo: The Irrawaddy)

Rejecting the claims of mass fraud and voting irregularities used by the Myanmar military to justify its coup, an international monitoring group said in its final report on the results of last year’s polls that the vote reflected the true will of the electorate. Rejecting the regime’s allegations of electoral fraud, the Asian Network for Free Elections (ANFREL), one of two foreign observer missions accredited to monitor the vote, said “Election Day was found to be peaceful and orderly across the country, with no major incidents reported,” in its final comprehensive report released on Monday.

The report found that the campaign environment ahead of the general elections was not quite as free or fair as in 2015, however, in part of because of the unprecedented backdrop of the COVID-19 pandemic.

Quoting the network’s former chair, the report states, “‘There are no elections made in heaven,’ meaning there is always room for improvement in the eyes of experienced observers.”

“Nevertheless, it is ANFREL’s informed opinion that the results of the 2020 general elections were, by and large, representative of the will of the people of Myanmar,” the report reads.

“Despite the raging COVID-19 pandemic, 27.5 million people voted thanks to the hard work of polling staff and election or health officials, their voices cannot be silenced,” Chandanie Watawala, executive director of ANFREL, is quoted as saying in the report.

Standing in solidarity with Myanmar’s democracy supporters, the group repeated in its report a chant that has become popular with protesters: “Give the power back to the people! [Pyithuarrnar Pyithu Pyanpayy!].”

The final report of the international observation mission of ANFREL was initially due to be released in mid-February after the group completed monitoring of the post-election period, including addressing election complaints in election tribunals and investiture of newly elected representatives—processes that were halted by the military coup.

“Until the military coup of 1 Feb. disrupted the final phase of a largely peaceful election process, ANFREL had meant to first congratulate the people of Myanmar, the Union Election Commission (UEC), and the hundreds of thousands of polling staff who made the 2020 general elections a success despite difficult conditions,” ANFREL said in the report.

Just hours before the newly elected Parliament was to convene, the military seized power by detaining elected leaders including State Counselor Daw Aung San Suu Kyi and President U Win Myint, political activists and politicians. MPs-elect who had arrived in Naypyitaw to attend Parliament were confined at their government guesthouse and later forced to leave the capital. In the following months, arrest warrants were issued for many of them, and many have been detained.

Since then, the regime has killed at least 796 civilians, and over 3,900 people are currently detained.

ANFREL added that the 2020 election was marked by efforts to increase diversity and achieve greater inclusion, with an increase in women candidates; an emphasis placed by political parties on fielding ethnic candidates and reaching out to 5 million first-time voters; continued efforts to provide advance voting opportunities to the elderly and PWD (persons with disabilities) voters; and the first-ever openly LGBT candidates, among others.

“ANFREL found no reason to doubt the overall integrity of the advance voting process,” it said, referring to a phase of the election that drew allegations of fraud from the military and its allied party. To the contrary, ANFREL said, the UEC allowed greater participation in a challenging environment.

Earlier, other poll monitors including the US-based Carter Center and Myanmar’s largest election observer group, People’s Alliance for Credible Elections (PACE), said in their reports the election was largely free and fair with no major irregularities.