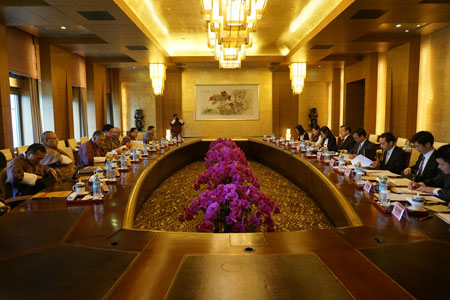 China and Bhutan held the 24th round of border talks in Beijing in 2016. (Photo: www.fmprc.gov.cn)

NEW DELHI: The 25th round of border talks between China and Bhutan has been scheduled for April 7 and 8 and will be hosted in Kunming, southwestern China’s biggest city, sources have told StratNews Global. A delegation from Bhutan is reportedly already in China undergoing the mandatory 14-day quarantine in view of the pandemic.

Although China and Bhutan do not have official diplomatic relations, they have engaged in 24 rounds of ministerial-level talks so far to resolve their border dispute. The 24th round was held in Beijing on August 11, 2016. Within less than a year after that round, Chinese forces tried to forcibly build a track in Bhutanese territory of Doklam on the tri-junction of India-China and Bhutan in the Chumbi Valley, forcing the Indian Army to intervene and stop the Chinese aggression that led to a 73-day standoff between Indian and Chinese troops.

Since then, China has strengthened its infrastructure on its side of the border in the Doklam area even as India has beefed up its military presence in the area. The 25th round will be watched closely by India since China raked up a new dispute in eastern Bhutan last year.

Talks between Thimphu and Beijing have traditionally been limited to three areas of dispute—two in North Bhutan (Jakarlung and Pasamlung areas) and one in West Bhutan, the more famous Doklam area—but in June 2020, Beijing suddenly lay claim to the Sakteng Wildlife Sanctuary (SWS) in Eastern Bhutan bordering Arunachal Pradesh (see map). 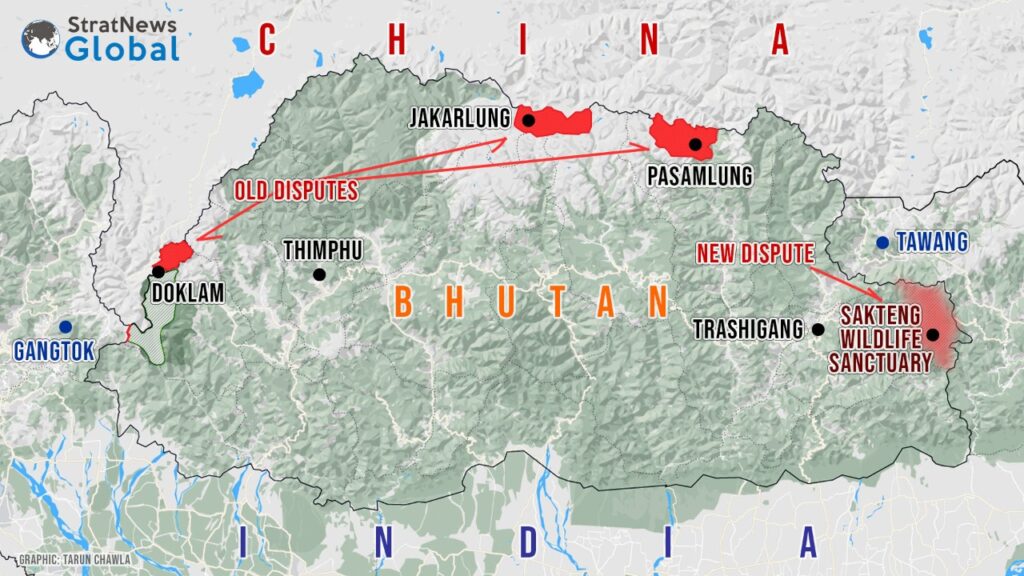 StratNews Global was the first media outlet to report China raising a new, non-existent dispute with Bhutan at a virtual meeting of the Global Environment Facility (GEF) held on June 2-3, 2020. The Council was meeting to decide on funding for various environmental projects across the world. One of the projects seeking funds was SWS.

As the SWS request came up for discussion, sources said, the Chinese member of the GEF Council raised objections against the proposal contending that the sanctuary was located in a disputed area between Bhutan and China. The objection came as a shock to the Council meeting but the GEF Secretariat immediately rebutted the Chinese contention pointing out that the SWS was located within the sovereign territory of Bhutan, sources had told StratNews Global then.

The matter rested there but in July 2020, a Chinese Foreign Ministry spokesperson repeated the claims at a press briefing in Beijing. He said China had offered Bhutan a “package solution” to its boundary dispute, referring to its 1996 proposal for a territory swap to give Bhutan the disputed areas in its north in exchange for the disputed western areas including Doklam. The spokesperson then went on to refer to Sakteng—an entirely new claim—by claiming that “the boundary between China and Bhutan is yet to be demarcated and the middle, eastern and western sections of the border are disputed. China has proposed a package solution to these disputes,” he said when asked about the Sakteng claim.

New Delhi and Thimphu have held several consultations at the highest level over the new Chinese claim. The SWS shares a boundary with the Indian state of Arunachal Pradesh, abutting the west Kameng sector and the highly sensitive Tawang area that is home to one of the oldest Buddhist monasteries in the world. China describes entire Arunachal Pradesh as South Tibet, a claim India has always rejected.

What direction the 25th round of talks between Beijing and Thimphu takes is anybody’s guess but the tiny Himalayan kingdom has been under tremendous pressure from China for several years to make concessions on the border. So far, Bhutan has stood by India and kept Indian sensitivities in mind while dealing with China. Incidentally, Bhutan’s long serving ambassador to India Maj. Gen. V. Namgyal—a close confidante of the royal family—is an important member of the Bhutanese delegation that will hold talks with the Chinese team in Kunming.

Last year, in the wake of the SWS claim, the Bhutanese embassy in Delhi had issued a rare press note—published by ‘The Hindu’—asserting that “all disputed areas” will be discussed when the Bhutan-China boundary talks are held again.

“The boundary between Bhutan and China is under negotiation and has not been demarcated. Twenty-four rounds of ministerial level boundary talks have been held,” a statement from the Royal Bhutanese Embassy in Delhi, made available to ‘The Hindu’, said.

Bhutan is not known to discuss the boundary issue with China publicly keeping in view the sensitivities involved in New Delhi, Beijing and Thimphu. Even at the height of the Doklam crisis in 2017, Bhutan issued just one formal statement letting India and China handle the matter.