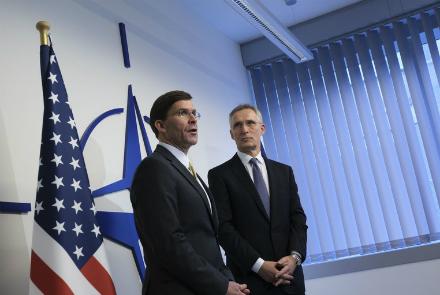 KABUL: Afghanistan and the United States will issue a joint declaration to emphasise U.S. commitments for Afghanistan on Saturday, the day the U.S. and Taliban are scheduled to sign a deal in Doha. U.S. Defense Secretary Mark Esper and NATO chief Stoltenberg will come to Kabul tomorrow to announce the declaration with President Ghani, presidential spokesman Sediq Sediqqi has said.

A six-member delegation from the Afghan government, entirely chosen by President Ashraf Ghani, is expected to meet the Taliban in Doha right after the U.S.-Taliban deal scheduled to be signed on Saturday, sources said.

Meanwhile, in an open letter to U.S. Secretary of State Mike Pompeo and Secretary of Defense Mark Esper, 22 U.S. Congress members have raised concerns over the potential agreement between Washington and the Taliban, saying: “The Taliban has a history of extracting concessions in exchange for false assurances”.

According to the letter, the Taliban will “accept nothing less” than a full-scale U.S. withdrawal from Afghanistan as the group seeks to establish their totalitarian “Islamic Emirate”.

The letter raises concerns that the U.S. military will involve the Taliban in counter-terrorism operations and that intelligence will be shared with the insurgent group.

Based on the letter, the Congress members want no commitment of a full U.S. withdrawal in the signed plan, among other demands.

The letter also states: “The Taliban is not a de facto counter-terrorism partner, and pretending they are ignores their long-time jihadist mission and action. They continue to be closely allied with al-Qaeda and fight alongside them”.

The Congress members have also suggested a set of demands which are as follows:

This comes as the U.S. and the Taliban are expected to finalise a peace deal on February 29, if the ongoing reduction in violence (RIV) period is concluded successfully.

US Representative Liz Cheney, a signatory of the letter, on Wednesday at a hearing of the House Armed Services Committee asked Defense Secretary Esper and Gen. Mark Milley, the Chairman of the Joint Chiefs of Staff about any “side deals” or “secret annexes” in the planned U.S.-Taliban deal and wanted Gen. Milley to confirm that working with the Taliban in a counter-terrorism role was “lunacy”.

Both Esper and Milley expressed no specific knowledge about what Representative Cheney was referring to, with Esper saying: “Nothing comes to mind right now that you’re mentioning”. Both men reiterated that the deal is entirely “conditions-based” and the main priority is to prevent Afghanistan from becoming a safe haven for terrorists.