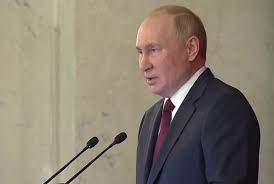 Russian President Vladimir Putin has expressed concerns over recent developments in Afghanistan, saying that the situation in Afghanistan “prompts the need for additional measures” to ensure his country’s security.

“We face serious tasks in the Afghan direction, especially after the Americans have pulled out from that country,” he said. He made the remarks at a board meeting of the foreign ministry.

Putin said that Russia would support its regional allies to provide security on the borders with Afghanistan. “The developments in Afghanistan prompt the need for additional measures to ensure Russia’s security on the southern frontiers and provide assistance to Central Asian states as our allies, which perceive Russia as a guarantor of stability in the region,” he said.

“It is necessary to continue working in this mode, taking measures to prevent uncontrolled flows of refugees and prevent the infiltration of terrorists and other criminal elements through our border,” Putin added.

Political analysts urged Russia to cooperate with Afghanistan. “As Russia is concerned by the possible threats in Afghanistan or the existence of Daesh in the country, it should help the Islamic Emirate to eliminate Daesh,” said Janat Fahim Chakari, a university instructor.

Tajikistan, Afghanistan’s northern neighbor, also voiced concerns over the possible Daesh threat from Afghanistan. The country has recently conducted military exercises on its border with Afghanistan.