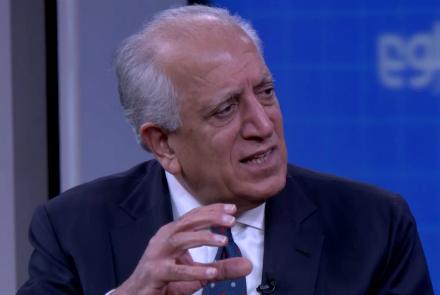 KABUL: U.S. Special Representative for Afghanistan Reconciliation Zalmay Khalilzad in an interview with Tolo News on Wednesday spoke about a number of significant topics related to the peace agreement between the U.S. and the Taliban, including counterterrorism operations, intra-Afghan talks and the prisoner exchange, and he also spoke about the current political deadlock between Ashraf Ghani and Abdullah Abdullah.

The U.S. negotiator who signed a peace deal with the Taliban in Doha said he hopes that the intra-Afghan talks are concluded within 100 days.

“In order to end the war between the Islamic Republic of Afghanistan and the Taliban, there is a need for a compromise to reach a political settlement,” Khalilzad told Tolo News on Wednesday, days after the United States and the Taliban officially signed a peace agreement in Doha. The deal is intended to pave the way for the withdrawal of U.S. forces from Afghanistan in exchange for a number of solid assurances by the Taliban to the U.S. and its allies.

“I personally hope that this issue (intra-Afghan negotiations) will be resolved within 100 days. We want this issue to be resolved during the first phase of the withdrawal of U.S. forces from the country, and this will be in the interest of Afghanistan and the world,” said Khalilzad, referring to the U.S.-Taliban peace agreement, which states that the U.S. will fully withdraw its forces over the next 14 months, and that the current force of about 13,000 troops will be reduced to 8,600 within 135 days.

Khalilzad, however, clarified that the withdrawal of all U.S. troops from Afghanistan in 14 months is condition-based.

When asked what he felt during the signing of the U.S.-Taliban deal, Khalilzad said: “I had a feeling of hope, but it was nothing to celebrate. There is a possibility that this agreement will open the door for intra-Afghan talks, and I think this will happen, but we can only celebrate after it is completed.”

Khalilzad suggested that Afghans, in light of the past 40 years of conflict, need to agree on a formula where the bitter events of the past are not repeated.

But the U.S. envoy cautioned that if the prevailing situation continues, the deal between the U.S. and the Taliban will lose significance.

According to Khalilzad, the peace deal between the U.S. and the Taliban was intended to test whether it was possible to end the conflict in Afghanistan through political means and negotiations.

He also said that the ongoing war in Afghanistan is taking the lives of many Afghans on a daily basis. “Every week hundreds of Afghans are killed; sometimes, nearly 1000 Afghans are killed in a month. Annually the number of casualties among Afghans exceeds thousands of fatalities. This war needs to stop now,” he said.

Khalilzad said that initially both the Afghan government and its allies believed that they could defeat the Taliban on the military front, but now everyone is convinced that there is no military solution to the conflict in the country, only a political settlement.

Khalilzad said that the Taliban, as part of their commitment to the peace deal, assured the U.S. they will fight terrorism and keep Al Qaeda elements outside of Afghan territory. He however rejected rumors that the U.S.-Taliban deal had two secret elements. He said that every provision of the deal between the U.S. and the Taliban are interconnected and interrelated

“The agreement is not about trusting each other, it is based on what is taken in exchange for what is given—it is a totally conditions-based agreement,” he said.

In answer to questions about whether the U.S. and the Taliban will fight Al Qaeda together, Khalilzad said: “We have reached an agreement about how they (the Taliban) will deal with such issues. We have joint channels in Doha where meetings are held on a daily basis. At the same time, we are dealing with this from an intelligence perspective to find out whether these commitments are implemented or not.”

When asked if the U.S. provides financial assistance to the Taliban to fight terrorism, Khalilzad said: “Currently we are not providing any money to the Taliban.” He said that Taliban representatives, U.S. diplomats and military personnel are meeting in Doha on a regular basis to discuss the implementation of the peace deal between the two sides, and the next steps to ensure full implementation of the accord.

In answer to a question about U.S. troop withdrawal, the U.S. envoy said: “I don’t want to talk about it for the sake of security, because there are domestic and external elements who are eager to create obstructions in the way of a successful implementation of this agreement.”

“There are certain people who would prefer the ongoing situation to continue—rather than peace—because it benefits them economically,” said Khalilzad.

Khalilzad said that the U.S., the Afghan government and the Taliban share the responsibility to ensure successful implementation of the peace deal. “It’s very clear that any withdrawal will be conditions-based, it is very important for the Afghan people to be aware that if all the conditions that exist in the agreement are implemented, if there is an assurance to the U.S. and the world about threats from the Afghan soil, if there are intra-Afghan talks that we pray to yield an outcome, then the U.S. will not see it necessary to stay here. We don’t want to leave in a situation where there is still a war going on in the country; we understand people’s concerns, that’s why we are trying to restore peace.”

Khalilzad said that the U.S. recognizes the Afghan government as a legitimate and strategic partner, not anyone else. “The Taliban is a group that is at war here, so it’s better to end this war through negotiations, understanding, and through intra-Afghan talks where we have the Taliban and an inclusive delegation from the Islamic Republic of Afghanistan to end the war.”

“Based on the U.S.-Taliban peace agreement, the scale of the war should be reduced in the country after the peace agreement. We wanted to test the Taliban to see that they were able to reduce violence, and act upon what they say, and the result was positive,” said Khalilzad, referring to the seven-day reduction in violence (RIV) plan that was implemented on February 22.

He said that the Taliban must not miscalculate when it comes to the issue of increasing violence. “If they (the Taliban) launch attacks on Afghan forces, we will be there to defend them (Afghan forces), so we are mounting pressure on the Taliban to not resort to violence, and the war must be reduced,” he said.

“According to the agreement, a ceasefire comes once the two teams—the team of the Islamic Republic of Afghanistan and the Taliban—sit down. And they have said that a ceasefire is one of the key issues that need to be agreed upon. Once there is a political agreement, there will be a permanent ceasefire,” Khalilzad said.

Khalilzad said that the Taliban demanded the release of 5,000 prisoners in exchange for engaging in talks with the Afghan side. “The Taliban wanted 5,000 of its prisoners to be released by the government—out of 13,000 to 14,000 prisoners—on the day of the talks, to build trust, or to create a conducive environment for talks. So we told them (the Taliban) that we are prepared to help in this matter,” said Khalilzad.

President Ashraf Ghani signed an order on Tuesday night to pardon and release Taliban prisoners in order for the peace talks between Afghanistan’s government and the Taliban to start, said Palace spokesperson Sediq Sediqqi.

Before his inauguration, Ghani had announced that he would not release the Taliban prisoners before the intra-Afghan talks.

The U.S. envoy said it is better that a single team is dispatched for holding talks with the Taliban. “It will be good to have one team. I have talked about it with various sides. Despite problems in the political sphere, everyone prefers one team to go for talks,” he said.

In a question about the chances that the agreement will collapse, Khalilzad said, “It is very difficult to come up with a percentage about such issues. Of course, our expectation is that there is less possibility of success if the Taliban fails to abide by their commitments and instead acts against the provisions of the agreement. Then there is a possibility (of a collapse of the U.S.-Taliban deal).”

On a possible move by the Taliban to re-establish an Islamic emirate, he said: “It’s a red line for the international community; there is international consensus regarding this matter, so I don’t think this will happen.”

Khalilzad said that he tried his best to create understanding between Ashraf Ghani and Abdullah Abdullah before the twin inaugurations, but he did not have enough time because of the time required by the peace process. “We tried our best; we worked until 4:30 am on the day of the twin inaugurations. A meeting was also held between Mr Ashraf Ghani and Mr Abdullah. Unfortunately, we could not manage to reach a conclusion. Both sides said that they want the negotiations to continue to find a solution. We are seeking ways to find a solution to the issue.”

“I am confident that the two (Ghani and Abdullah) have the intention to find a solution, because it’s something the world wants, and the people of Afghanistan want, and it is also a necessity, in light of the current situation, to give peace a chance,” Khalilzad said.

“We hope that this will not overshadow the historic opportunity for peace in Afghanistan,” Khalilzad said in response to differences between Ghani and Abdullah.

Khalilzad said that differences between the two sides could have negative impacts on the peace process and the security of Afghanistan. According to him, President Ashraf Ghani had offered Abdullah a post as head the High Peace Council, and a stake in (Ghani’s) government, but Abdullah refused the proposal. “It’s now the time for the two sides to focus on the interests of Afghanistan,” Khalilzad suggested.

In a question about the parallel government, he said: “We are not in support of two governments, we do not favor any parallel government, we do not have any problem with Dr Abdullah’s ideas and concerns, we are aware of the problems in the election. What we want to say is that there is a need for an understanding in this sensitive situation, because we want a sovereign, united and self-sufficient Afghanistan.”