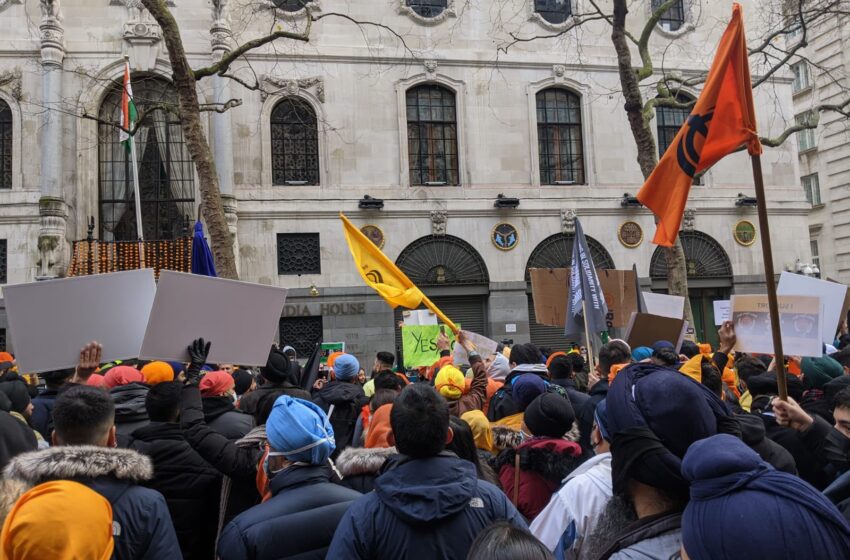 NEW DELHI: At a time when hate crimes against Sikhs in the UK have risen by 70%, one would have thought the community there would be focused on dealing with it. Instead, they appear more galvanised by the farmers agitation in India against the government’s farm laws. As if that were not enough, Sikh and Kashmiri separatists have found common cause in the protests outside the Indian High Commission in London.

‘As expected, it soon became clear that the gathering was led by anti-India separatists who had taken the opportunity of the farm protests in India to ostensibly back the farmers in India but use the opportunity to pursue their own anti-India agenda,’ said a statement by Vishwesh Negi, Minister Political in the Indian High Commission.

The protesters, many of whom are believed to belong to Sikhs for Justice [SFJ] a US-based secessionist group which supports the cause of Khalistan. Despite the arrest of 13 people and the London police warning that ‘appropriate action will be taken’, the protesters are undeterred with the SFJ reportedly looking to organise another rally on December 10. This comes as 36 MPs, some of whom are of Sikh origin, have written a letter to British foreign secretary Dominic Raab asking him to voice his concerns to his Indian counterpart.

Leading the group is Tanmanjeet Singh Dhesi, who was the first turbaned Sikh MP from the Labour party who has described the farming laws as a ‘death warrant’. He claimed it had repercussions for Sikhs in the UK.

‘This is an issue of particular concern to Sikhs in the UK, and those linked to the Punjab, although it also impacts heavily on other Indian states. Many British Sikhs and Punjabis have taken this matter up with their MPs, as they are directly affected with family members and ancestral land in the Punjab,’ wrote Dhesi. He claimed 14 Sikh MPs had attended a virtual meeting he had organised, implying strong political support for the Indian farmers’ rights.

Dhesi is right in that it is a political matter. He is part of the increased number of Indian-origin faces in the shadow cabinet. Introduced by new Labour leader Keir Starmer in a bid to placate angry British-Indian voters after Jeremy Corbyn’s controversial remarks on Kashmir, these members, along with MPs who have sizeable British-Punjabi votes in their constituency, are more than willing to do what it can to bring lost British-Indian and specially British-Sikh votes back to the party. Traditionally these groups voted Labour but defected to the Conservative party in the 2019 elections.

Eyes are also on the Sikh Federation. A non-government pressure group which works with mainline political parties to promote ‘relevant’ Sikh issues the group has been vocal about ‘farmers rights’ on its social media handles. It also supports the cause of Khalistan something which resonates with some MPs especially those of Sikh origin. Four months ago, Labour MP Preet Kaur Gill reacted to Prime Minister Boris Johnson’s declaration that the British government did not support the cause of Khalistan by tweeting, ‘The principle of self-determination is prominently embodied in Article 1 of the Charter of the United Nations. It is positioned as the first right in the twin Human Rights Covenants — the International Covenant on Civil and Political Rights [ICCPR] and [ICESCR]. Most concerning.’

Gill’s remarks show how increased participation of Indian-origin parliamentarians in the West can prove to be a double-edged sword for India. While these parliamentarians have an increased interest in India not all of it will be positive. Now, with many of them taking up more important positions in government, their opinions on issues surrounding India will be much more in the public domain and will increasingly matter much more than before. India must be prepared for this and devise appropriate counter-strategies.