NEW DELHI: With Russian mercenaries, a general allegedly backed by the CIA, and an ongoing civil war that now threatens to cut the country’s oil production to zero, the Libyan conflict is slowly taking the geo-political centre-stage in West Asia. Though the world’s eyes are still fixed on a possible escalation of the US-Iran conflict, the battle for control over this oil-rich state could soon determine who will be the dominant player in the region.

But it’s interesting to note that the crisis in Libya is missing two key actors usually involved in conflicts in that part of the world – Iran and the US. The result is there’s now a very different kind of conflict emerging in the region, strictly between Sunni nations, with Turkey and Qatar on one side backing the UN-recognised Government of National Accord (GNA), and Saudi Arabia, UAE and Egypt on the other backing the controversial strongman General Khailfa Haftar (see box below) who has been part of the Libyan political scene for over four decades. 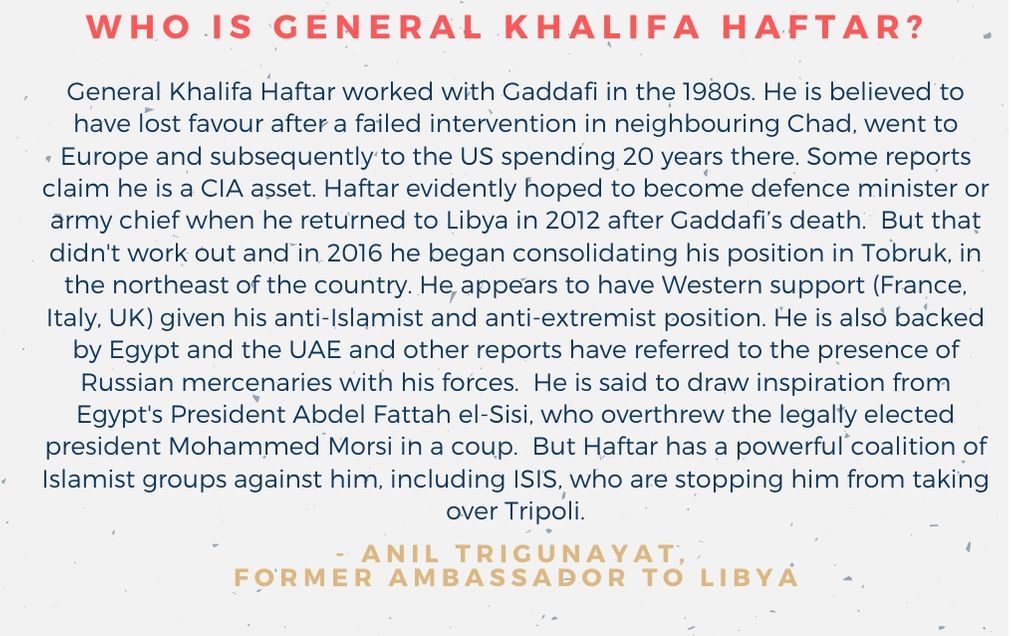 So why is this happening? Experts say the Arab states are politically divided. Saudi Arabia, the UAE and Egypt see the Arab Spring as a threat to their regimes and are worried about the prospect of a Libyan government which supports the Muslim Brotherhood. This is particularly true of Egypt which shares a 1,400-kilometre-long border with Libya. On the other hand, Turkey’s President Erdogan’s ties with the brotherhood go back to the 1970s. There’s also the fact that Libya was once part of the Ottoman Empire. On another note, Erdogan is eyeing oil drilling rights off Libya’s Mediterranean coast.

The arrival of Islamist fighters from Syria on the side of the UN-backed government in Tripoli in the west, has widened problems. India’s former ambassador to Libya Anil Trigunayat, says that “Libya has become the new theatre of war. Apart from the Gulf nations, a militia called the FSA – Free Syrian Army has come from Syria to fight and they are believed to be paid by Turkey to fight against Haftar. In the meantime, ISIS and other militant groups too are there. These militias which were first brought in from Afghanistan by western nations in 2010 to dislodge Gaddafi, are now supporting the UN-backed government and fighting the western-backed Haftar”

Politics is only part of the problem. With Gen Haftar and his Libyan National Army (LNA) controlling the eastern Libyan oilfields, Russia has reportedly sent mercenaries to back Haftar. Turkey, on the other hand, which signed a controversial maritime border agreement with the UN-backed government in Tripoli, has sent Turkish forces to protect the UN government. This is the reason hy despite a siege since April last year, Gen Haftar has been unable to take Tripoli.

As regards Russia, Trigunayat believes that “Russia has a relatively new role in the Middle East. It was out of the region since the collapse of the then Soviet Union and started making inroads in 2015 when they thought the Bashar al-Assad government was about to fall. In Libya, they think the only viable option is Haftar because he has been able to put eastern Libya into some kind of order. On his part, Haftar has promised multi-billion-dollar contracts to Moscow. But to what extent they can control Haftar remains to be seen.”

The US has not seen Libya as a priority for some time now. Though then US president Barack Obama ordered the bombing of Libya which finally led to the overthrow of the Gaddafi regime in 2011, the killing of the US ambassador to Libya in 2012 became an electoral issue in the campaign that brought President Trump to power. Since then US interest in Libya has flagged.

Trigunayat says “The US never really wanted to get into Libya. It was France under the then president Nicholas Sarkozy who pushed them into it in 2010 as a Nato member. Though President Trump has spoken to Haftar, he is interested in withdrawing US troops from the region (Iraq and Syria) and has no wish to extend forces into another theatre of conflict especially not in an electoral year. The US can’t take bodybags.”

Though analysts are clear that the crisis in Libya will be determined by what Turkey and Russia’s next steps, are they do believe that India can and should play a more active role in Libya. The fact that External Affairs Minister Jaishankar recently paid a visit to nearby Africa nations Niger and Tunis suggests that New Delhi may be looking to do so.

“The interesting point is that our EAM met Lavrov recently and there was a big discussion on the situation in Libya. We still have huge interests there – we have 2,000 Indians, we have companies who have invested and lost money. The Libyans want us to do more and Libyan officials keep telling me this. When the situation is more stable we must carry out capacity building and look to seek a more active role for ourselves by possibly conveying the right messages to all sides,” Trigunayat says.