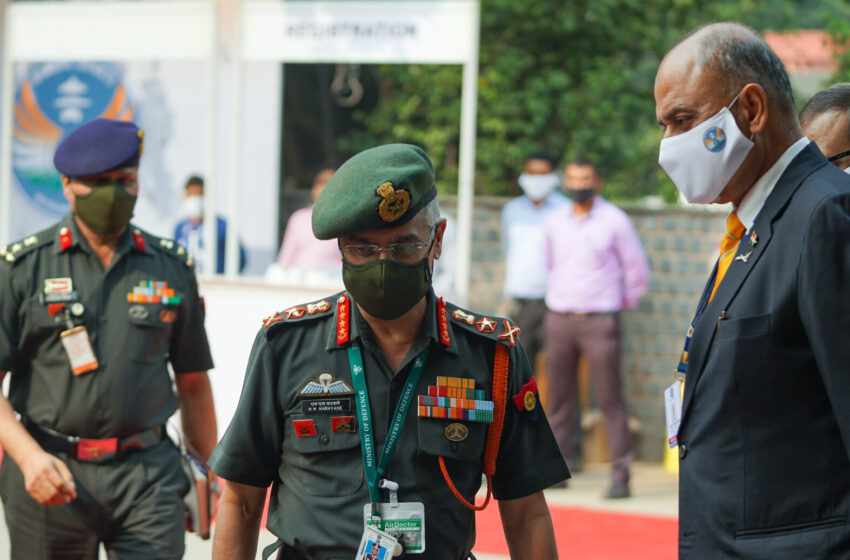 NEW DELHI: The Indian government has chosen to reveal little about the first ever visit by an Indian Army chief to Saudi Arabia. Gen. Manoj Naravane’s visit to Riyadh beginning Sunday (December 13) is significant. The two countries exchanged defence attaches way back in the 1990s, yet it took them three decades to agree on a visit. That could be attributed to doubts and fixed perceptions on both sides, the Pakistan factor and so on. But that was in the past.

“Gen. Naravane’s is a ‘technical visit’, one designed to lay the ground for something more substantive in the future,” argues Ambassador Mahesh Sachdev, a former diplomat and Arabist who served in Riyadh and Jeddah and was desk officer for the Gulf for seven years. “The strategic content of the relationship will presumably be taken up at the political level.”

The army chief’s visit hints at a possible role for India as a contributor to the security and stability of the Gulf region. This view stems from Saudi Arabia’s regional insecurities that have also intertwined on its domestic insecurities.

Regionally, the Saudis see Iran as a major threat with its clerical leadership orchestrating a crescent of instability and conflict stretching from Iraq to Lebanon and Yemen. The drone attack in September 2019 on the oil processing facility of Abkaik Buqyak in eastern Saudi Arabia may have deepened Riyadh’s concerns. Although Yemen’s Houthis claimed credit for the attack, the oil facilities are closer to Iran. So the Saudi suspicion that Iran was the actual perpetrator. But what may have disappointed Riyadh was President Donald Trump’s hands-off approach, in contrast to the firm support extended by President George Bush in 1990 when Iraqi dictator Saddam Hussein invaded Kuwait and threatened the Saudis. Bush sent his military to the aid of the Saudis and built a coalition to drive out the Iraqis from Kuwait.

Saudi Arabia’s internal situation is stable. Al Qaeda and the Islamic State have been taken on by the kingdom’s domestic agencies and defeated. The Saudis are confident, yet may be looking for assurances of help if the situation threatens to go under.

India’s army chief may get an exposure to the Saudi dilemma in Yemen. They appear to be getting ready to disengage, leaving the country in no better shape than when they militarily intervened five years ago. In that context, it will be an opportunity for Gen. Naravane to be briefed on their post-Yemen experience. Where does the Saudi military leadership think they fell short? The general view is that the Saudis believe their land forces did not perform creditably despite having excellent equipment.

The Saudis may want to learn more about how India manages its borders. This stems from concerns about securing their 1,300-km long undemarcated border with Yemen, from infiltration by the Houthis. The Saudis perhaps apprehend that al-Houthis could feel emboldened to strike inside the kingdom.

“We could offer to help boost their defence preparedness through specific training programmes organised in Saudi Arabia and in India,” said Ambassador Sachdev, “Saudi officers are already attending courses at the National Defence College, Staff College and other institutions. Those numbers could go up.”

India could send teams of advisers and experts to Saudi Arabia, which could at a later date, translate into the export of specific equipment. This would tie in with the “Atmanirbhar Bharat” initiative.

Gen. Naravane’s visit will provide an opportunity to better understand the churn in the region which has seen the Arab front against Israel start to thin. “At a general level, this bodes well for India which has excellent relations with Israel, the UAE and the Saudis. But their coming together is also indicative of an anti-Iran front forming, one which India would prefer to steer clear of,” says Sachdev.

But the Saudis have manoeuvred with considerable skill in the international stage. Their chairmanship of the G20 was competently handled, clearly showing their ability at multilateral diplomacy. The Saudis seem to be signalling they are looking forward to the next decade.

The visit is emblematic of these forward-looking perceptions. It is clear the Saudis do not anymore see India through the religious prism or in Indo-Pak terms. Key terrorist fugitives from Indian justice have been sent back. Riyadh sympathized with India in the wake of the Pulwama attack and refrained from comment when India retaliated with an airstrike on a terrorist camp in Balakot.

The Saudis also see an India which is heavily invested in the Gulf. India is the world’s second-largest buyer of their oil after China. They would like to leverage that even though at $50 a barrel, oil no longer brings the kind of revenues it once did. What India needs to do is ensure that defence is added to the extensive and expanding bilateral agenda. Currently, this vital component is missing, unlike in contrast to the Saudis who take an integrated view of economic, security and defence relations.