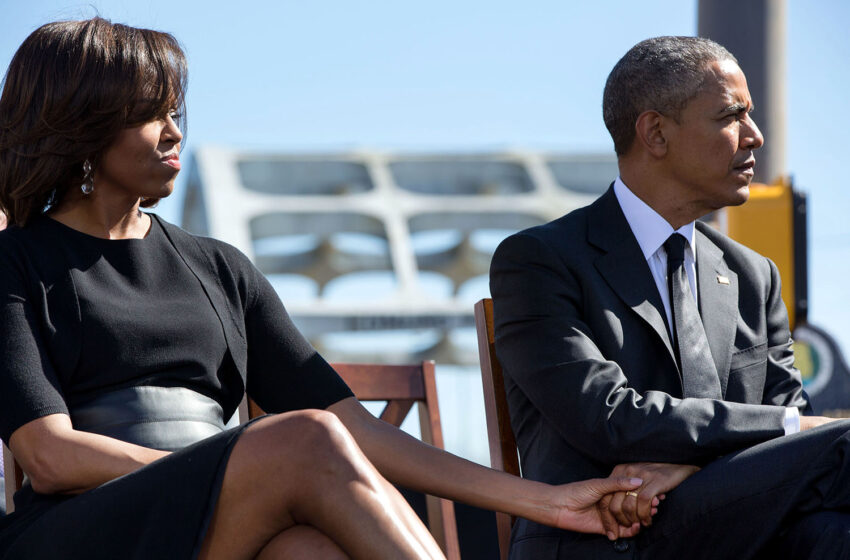 NEW DELHI: There were three former US presidents – Jimmy Carter, Bill Clinton and Barack Obama who addressed the Democratic convention, but it was Obama, or more accurately the Obamas – Barack and Michelle – who stole the show. An impassioned speech by the former First Lady that excoriated Donald Trump – a novelty as First Ladies don’t normally go for the jugular against a ruling president – followed by her husband on Thursday, dominated US and world headlines. Other presidents spoke and so did Kamala Harris, officially confirmed at the VP nominee at the convention. Being the first black woman to be a vice-presidential candidate of a major party it should have been a Kamala moment. But it didn’t feel that way.

No one knows that better than the president. After Michelle Obama’s speech went viral on Twitter not just in the US but across the world, Trump struggled to go on the offensive. “Not only was it taped,” he said, “but it was taped a long time ago because she had the wrong [coronavirus] deaths.” For the record, Michelle Obama had said over 150,000 but the figures are now over 170,000. Even the president’s most diehard supporters would acknowledge that was bad. He had to do the same with Barack. The importance of the former president’s address was highlighted by the fact that Trump went on a Twitter meltdown, releasing a rash of all-capital Tweets stating in one “HE SPIED ON MY CAMPAIGN AND GOT CAUGHT.” Another takedown that didn’t really quite hit the Trumpian mark. That wasn’t all. Trump felt the need to host a press conference soon after, where Obama not Biden was the chief line of attack. All Biden got was the nickname ‘Sleepy Joe.’

“I see the horror that he has left us, the stupidity, the transactions that he made. We have the border wall, security, UAE deal – universally praised by people who are not fans of Donald Trump. We need to realise how bad he was, how ineffective and how he presided over the slowest growing recovery since 1929. Till the China virus we had the greatest economy in the world. The reason I’m here is because of President Obama and Joe Biden. If they’d done a good job, I wouldn’t be here,” Trump said in the conference.

Why is Trump so agitated by the Obamas? There is of course the charisma factor but this time round they have been unusually active about endorsing Joe Biden. Sure, Barack stepped into the ring to bat for Hillary in 2016 – a rarity in itself – but it was nowhere near as heartfelt as it is this time around. Biden is his “brother” and Obama’s presence is more than likely to be used again and again by the Democrats to ward off Trump’s nasty attacks.

The other point that would bother Trump, the Obamas’ speeches suggest this is a personal crusade for them, something that was not there earlier. This is a problem for him as they bridge the divide in a way no one else can. The Obamas shared a meal with the Bushes – George Bush Jr and his late wife Barbara – at the White House in 2009. Four presidents along with Obama stood for a photo-op – Jimmy Carter, George Bush Sr and Jr, Bill Clinton – an unprecedented action that hadn’t taken place in 27 years. The younger Bush had some warm words for Obama.

“One message that I have and I think we all share is that we want you to succeed. Whether we’re Democrat or Republican, we care deeply about this country,” he said then.

That’s what bothers Trump so much. He is a president who wants to be liked, demands recognition, and wants to set the agenda as he did with the ‘Mexican Wall’ narrative in 2016. With the Obamas around that is much harder to do. The ‘birthing’ controversy as acknowledged by Trump himself is over, the ‘ape’ and ‘gorilla’ narrative against Michelle is also useless against a person who likes to stay away from active politics. That’s bad news for Trump. He needs a target, an effective punching bag for his politics to shine, he is not at his best when outlining visions or successes.

It is of course early days and the president may yet pull something out of the bag at the upcoming Republican Convention next week. He’ll have to do it on his own. Bush isn’t coming and neither is Mitt Romney, the 2012 Republican presidential candidate. With the lack of firepower, it is more than likely racism and polarising issues will be on the agenda such as demonising Black Lives Matter supporters and especially Native Indian groups whom Trump will want to make the ‘Mexicans’ of 2020. On the online side, the president’s statement that far right conspiracy theorists QAnon are “people who love our country” – the first public and tacit acknowledgement of the group – suggests that we may see a no-holds-barred cyber-war in the days to come.

On the Democrats side, Obamas and Kamala Harris have hogged headlines and captured listeners. But there is a flip side to their endorsement leaving campaign strategists with many questions to answer. How much should the Obamas be involved? Is there a danger of them overshadowing the candidates? The answer if one simply goes by the convention’s reaction is yes. This is where both Biden and Kamala have to stand up and step out of Barack and Michelle’s shadows. It will not be easy to do but it has to be done and quickly. Otherwise the ‘Obama endorsement’ will make people either feel it is a Trump-Obama tussle or if only Obama and his wife were running. Paradoxically, that is exactly what the president would want.