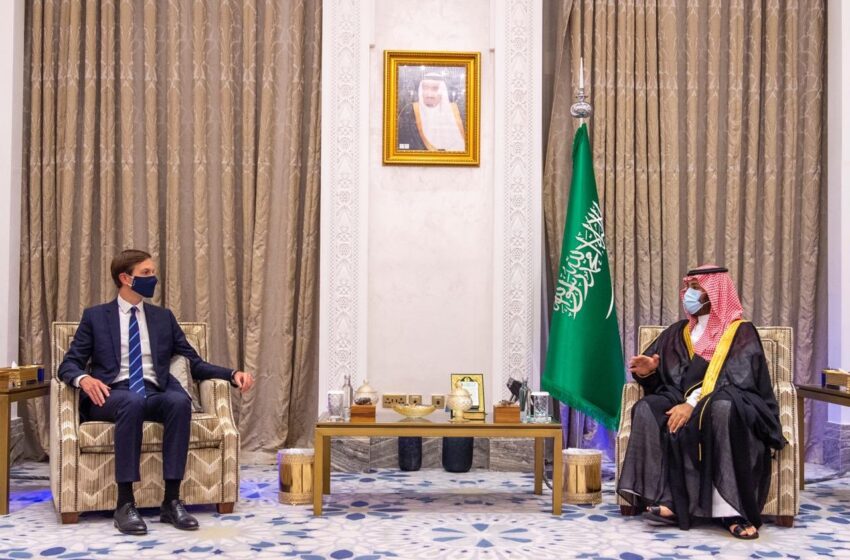 NEW DELHI: Jared Kushner’s upcoming visit to Saudi Arabia and then Qatar underscores the Trump administration’s bid to cement ties with the Kingdom. While the official line is that the visit is to heal the ongoing rift between Riyadh and Doha which had begun since 2017 when Saudi Arabia, Bahrain, UAE and Egypt snapped diplomatic ties with Qatar the real reason is believed to be Kushner’s push to get Crown Prince Mohammed bin Salman to normalise ties with Israel. Already, Israeli media reports say the normalisation process has begun as Prime Minister Benjamin Netanyahu touched down in Saudi Arabia to hold secret parleys with the Crown Prince – something Saudi Arabia has vehemently denied –  during the visit of US Secretary of State Mike Pompeo earlier this month to Israel.

Kushner’s visit suggests a continuation of President Trump’s foreign policy. During much of his tenure, Trump has broken with tradition from previous US presidents and rather than focussing his attention on the US’s traditional ally, Europe, he has continued to focus his attention on West Asia and more specifically – Iran. The highlights of Trump’s ‘West Asia doctrine’ are to provide full support to Israel by supporting its maximalist agenda, building up Gulf alliances with Tel Aviv, and ramping up pressure on Iran to a point where it will become more and more difficult for president-elect Joe Biden to re-engage with Tehran let alone ‘normalise’ relations. This is already taking place. US Special Representative for Iran and Venezuela Elliot Abrahams has announced fresh US domestic sanctions on Iran every week from now until January 20 next year when president-elect Joe Biden takes over. This along with the possibly deliberate leakage of news that the US president sought options on an Iran strike suggest that Trump is doing everything he can to assure the Kingdom that the ‘Iran threat’ will not re-emerge even if he is out of power.

Trump has good reason to feel his policy will succeed. Though the administration may be a traditional ‘lame duck’ administration any gains they get during the Kushner visit is likely to remain. The US Senate of 100 seats is deadlocked at 48-48 and both Democrats must win their seats in the runoffs held to be held on January 5 in Georgia. If they do, vice-president-elect Kamala Harris gets the deciding vote and the Democrats gain control. If they do not, any major legislation that the president-elect would wish to pass can be scuttled by the GOP. Even if Democrats do win control of the Senate, given the razor slim majority, it may not be enough for Biden to overturn key foreign policy decisions. This is what Trump is counting on.

Apart from the Iran question, Kushner has good reason to visit Riyadh. Crown Prince Mohammed bin Salman is left in a state of uncertainty. Michèle Flournoy, Obama’s undersecretary for defense policy and a top contender for defense secretary in the Biden administration has spelled out her view that she opposed the sales of offensive weapons being sold to the Kingdom due to Saudi Arabia’s ongoing war in Yemen. The left wing within the Democratic party is pushing Biden and his team to go further and ban the sales of all weapons to Saudi Arabia on the grounds of ‘human rights violations.’ It isn’t as if such concerns weren’t raised earlier, they were, but the White House brushed them aside through the presidential veto. That’s not likely to happen now.

The other concern that Kushner would possibly be looking to assuage MBS on is personal lawsuits filed against the Crown Prince the alleged ordering of the death of Jamal Khashoggi in October 2018 and the assassination of former intelligence officer Saad Aljabri for which he is facing lawsuits in the US. Kushner would be looking to assure MBS that the Republicans would be channelling their gains and possible majority in the Senate – if the runoffs prove successful – to safeguard him personally. Already, Saudi Arabia and the Crown Prince faced a massive backlash when they hosted the virtually held G-20 summit hosted by Riyadh on November 20-21.

To close watchers of Trump, the Kushner visit would come as no surprise. The Saudis have been loyal customers during his heydays as a businessman. A report in the Washington Post quoted the president as saying during a rally in Alabama in 2015. “Saudi Arabia, I get along with all of them. They buy apartments from me. They spend $40 million, $50 million,” Trump told a crowd at an Alabama campaign rally in 2015. “Am I supposed to dislike them? I like them very much.” The report maintained that this transactional relationship went back to the 1990s and Trump would be keen to maintain that whether or not he is president.

Though Kushner is visiting Qatar there are two reasons why it is unlikely that a Saudi Arabia-Qatar rapprochement is on his mind. Kushner who also maintains a real estate firm is also believed to have close business links with the Saudis and MBS in particular. The second reason why a Saudi Arabia-Qatar deal is more than unlikely is that neither nations have altered their positions since 2017. Qatar supports the Muslim Brotherhood and has close ties with Iran which is an anathema to Saudi Arabia. The Kingdom also demands that all other Gulf Cooperation Council [GCC] countries remain subordinate to it, a position that Qatar has not endorsed. The US so far has seen no need to intervene here as Qatar according to President Trump continues to buy ‘tremendous amounts of military equipment,’ thus safeguarding its relationship with Washington. The real reason is simple. It is to reassure an old friend.