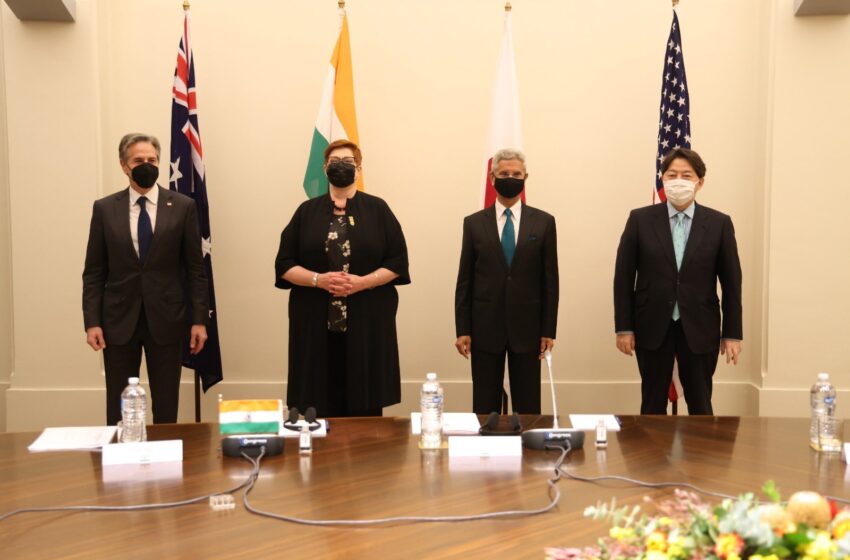 New Delhi: Quad foreign ministers meeting in Melbourne, Australia, in a toughly worded joint statement, warned against “ungoverned spaces” in Afghanistan, confirmed they were exchanging information on evolving threats and working with Indo-Pacific countries to counter terrorism and violent extremism.

The statement mentioned the 26/11 and Pathankot attacks, endorsing India’s position on terrorism from Pakistan. There was more in the strong endorsement of the Vaccine Initiative which will see the supply of over a billion covid doses from India by the year end.

On China, the Quad ministers opted for circumspection, making the predictable call for a “free and open Indo-Pacific”, but not mentioning China by name either in the joint statement or during a press briefing. But the allusions to China were clear in Australian foreign minister Marise Payne’s reference to “rules and norms that have provided a foundation for our stability, were under threat from authoritarian regimes.”

Her Japanese counterpart Yoshimasa Hayashi warned against “unilateral attempts to change the status quo in the South China Sea,” hinting that China needed to be curbed by more assertive measures.

Dr. S Jaishankar was more oblique, complimenting his Quad colleagues on the strategic convergences and shared democratic values, but given that India is the only Quad member with a volatile land border with China, he avoided finger pointing, merely stating that “we are building an agenda which seeks to further our shared vision of a free open and inclusive Indo-Pacific.”

There were obvious differences on Myanmar with the US having already imposed sanctions backed by Australia. India felt differently taking into account the security situation on its border with Myanmar, the flow of refugees, and of course Covid. “These are concerns that we take into account, and where we are concerned, we don’t follow a policy of national sanctions,” Jaishankar told US Secretary of State Blinken.

Some Indian commentators who had predicted that Washington would seek to club China and Russia together as common problem for the forum, were proved right as Blinken pointed out that Quad’s core principles of being “free and open” were being threatened by Russia’s aggression towards Ukraine.

Subtly hinting to his other partners and to the world that the Ukraine problem should become their problem, he said that “these principles are crucial to this (Indo-Pacific) region and every other part of the world.”

Unlike its other partners, India clearly has no interest in antagonising Russia by being involved in Ukraine, so Jaishankar deftly distanced himself from the issue saying, “I will add that as my colleagues have observed we are for something and not against somebody.”