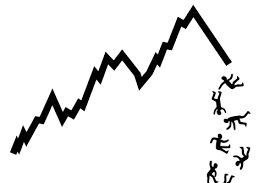 NEW DELHI: The Ides of March is actually a Roman tradition when people settled their debts on the 15th of that month. The gloom and doom it is generally associated with is traced to the assassination of Roman Emperor Julius Caesar on that day. In current times, the gloom and doom appears to have struck five days early with stock markets tanking worldwide.

The Washington Post headlined the collapse and the reason: “US Markets Tank As Coronavirus Outlook Worsens”. The Dow Jones Industrial Index slid almost 970 points, reflecting concern over the impact the virus could have on the global economy. The tech-heavy Nasdaq Index was also down by nearly 4 points while almost all of Standard & Poor’s 500 sectors were in the negative with financial, energy and industrial the worst performers.

Traders at the London Stock Exchange described the day as an absolute “meltdown”, likening it to the financial crisis of 2008.

But don’t blame it only on the virus. Oil was the other offender with prices per barrel plunging as Saudi Arabia-led OPEC (Organisation of Petroleum Exporting Countries) and oil-gas giant Russia ended three years of cooperation to go their separate ways.

The Nikkei Index plunged to a 14-month low, diving 1,050 points. Traders were reported dumping commodities and buying up gold to mitigate risk.

The mystery is why Indian markets tanked after global oil prices fell a massive 31%. It is estimated that every $5 fall in the price per barrel of oil translates into savings of $7 to 8 billion. And since Brent oil prices fell by $14 per barrel, India could end up saving a staggering $20 billion.

Add to that, it may help India cut its $133 billion trade deficit. It may eases retail inflation and give the Reserve Bank the space to cut policy rates. It may also lower input costs for a majority of India’s corporates.

But there’s also a negative, which is why the Sensex dropped over 2,400 points on Monday before ending the day at 1,942 points. The slowdown in manufacturing with GDP growth projected to fall below 5%, suggests lower oil prices may not help. The fall in oil prices will hit commodity driven emerging markets hard, which may trigger outflows from emerging market funds, and India could be a likely victim.

The oil price fall will deepen the uncertainties in the market caused by the Coronavirus. Some Dalal street veterans are warning of a recession. Others say the Indian economy has never done well during a global slowdown. The word is tighten belts, guard your cash and wait for better times.