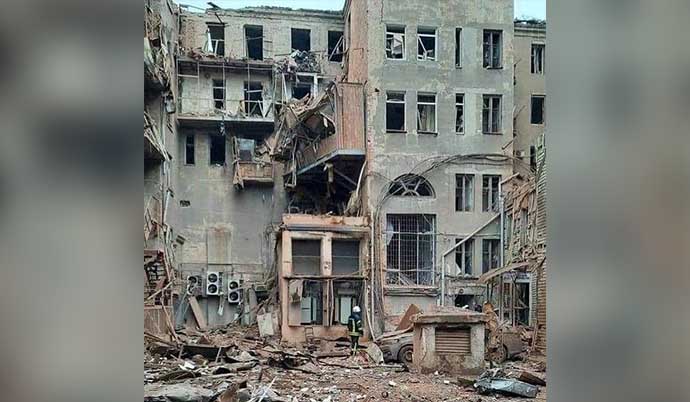 NEW DELHI: Ukraine has confirmed that the south western city of Kherson has fallen to Russian forces while Mariupol further east, on the Azov sea has been surrounded. This even as reports of stepped up Russian bombing of Kharkiv and other cities continued to pour in. The Russian defence ministry revealed casualty figures for the first time since the conflict stating 498 of its troops had died so far in Ukraine and 1,597 have been wounded.

For India, these reports have deepened concerns over how to get an estimated 3000 Indian nationals and students out of Ukraine. A Russian offer of a humanitarian corridor through its territory expired yesterday, and while 17,000 have been evacuated, the fate of those remaining hangs in the balance.

Earlier the Russians claimed that “According to our information, Ukrainian authorities forcibly keep a large group of Indian students in Kharkov who wish to leave Ukrainian territory and go to Belgorod,” said Russia’s defence ministry adding that Russian armed forces were “ready to take all necessary measures for the safe evacuation of the Indian citizens.”

India’s Ministry of External Affairs quickly stepped in to deny that report, with official spokesman Arindam Bgchi saying “We note that with the cooperation of the Ukrainian authorities, many students have left Kharkiv yesterday. We have not received any reports of any hostage situation regarding any student. We have requested the support of the Ukrainian authorities in arranging special trains for taking out students from Kharkiv and neighbouring areas of the country.”

Ukraine also denied it, but has demanded that the “governments of India, Pakistan China and other students of the Russian armed aggression in Kharkiv and Sumy to demand from Moscow that it allows the opening of a humanitarian corridor to other Ukrainian cities.”

The Indian government had issued an advisory last night asking students to make their way to three safe locations Pesochin, Babaye and Bedlyudovka by 6 pm Ukrainian time (9:30 IST). However, a number of Indian students are believed to have not been able to reach these locations in time and remain trapped.

A parliamentary consultative committee meeting is being held on the situation in Ukraine today. External Affairs Minister S Jaishankar is expected to be briefing the committee on the latest updates of the rescue operations being carried out so far.