Murals in Samarkand reveal its rich ancient past. (Photo: @eranudturan)

Samarkand was once a great centre of Buddhism and Sanskrit learning. It lay on the trade route from India via Bactria (Balkh) in today’s northern Afghanistan and Termez, a border city in Uzbekistan. Both Bactria and Termez had flourishing Buddhist monasteries. Bactria had the honour to construct the very first Buddhist stupa during the life of Lord Buddha. Today the ancient city is hosting the summit of the Shanghai Cooperation Organisation (SCO). Prime Minister Narendra Modi is representing India amid a galaxy of world leaders including Russian President Vladimir Putin and his Chinese counterpart Xi Jinping. 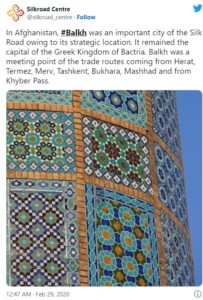 This is how it happened. Two brothers from Bactria (Skt. Bhallika) had come to Magadha on a business trip and they gave watermelons to Lord Buddha and are hence known as Trapusa-bhallikau, “The two Bactrians who gave watermelons” (trapusa is water melon, tarbuz). Lord Buddha gave them his nail-pairings and hair-cuttings and explained how to construct a stupa over them. Samarkand which had close economic ties with Bactria must have received Buddhism quite early. 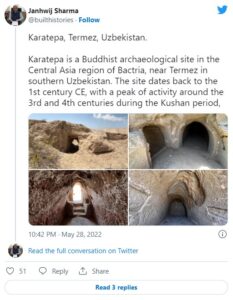 The etymology of the name Samarkand has been in doubt. The Encyclopedia of Islam (1995:8.1031) says that the second part of the name has the East Iranian word kand for ‘town’, while the first part has not yet been explained satisfactorily. In the Greek accounts of the campaigns of Alexander it is called Marakanda. Its archaeological site Afrasiyab has yielded evidence of Hellenistic presence. Alexander occupied it several times fighting with Spitamenes. The Greek name Marakanda means the ‘City of Mara’. The Milindapanha 285 and the commentary on Kathavatthu 54 speak of Marakayika class of gods. Marakayika occurs in Sanskrit sutras regularly with deva (putra) or devata: Saddharmapundarika-sutra (pp.421, 474), Lalitavistara (pp.46, 300), Mahavastu (pp.1.220 = 2.22, 2.163), Avadana-sataka (p.1.215), Bodhisattva-bhurmi (p.116). The word kaya means a ‘kingdom’. Mara has been identified by Asvaghosa in his Buddhacarita 13.2 as a synonym of Kamadeva or Cupid.

Thus Mara is the non-sigmatic (without s) form of Smara. Samarkand is Smarakantha ‘the City of Smara’. Kama occurs in Kamarupa, the early name of Assam. Panini says that kantha occurs in the names of cities in Trans-Gandhara.

Tusitakayika devaputra in the Mahavastu and Lalitavistara represent the people of the Tokharian kingdom. Nilakayika devaputra in the Lalitavistara refers to those hailing from the kingdom of the blue (stone). The lapis lazuli of Badakshan came from the mines situated on the upper reaches of the Kokeha River which waters the kingdom. Kaya is the Sanskrit form of Persian kai ‘king’ as in Kai Xusrow.

The majesty of Samarkand as the City (kand) of Cupid (Smara) can be visualized in the dynastic annals and poems of China. To cite Sehafer: “Most loved of all these young dancers from the Far West were the ‘Western Twirling Girls’ many of whom were sent as gifts from the rulers of Kumadh … and especially Samarkand, during the reign of Hsuan Tsuan (r.712-755)…. These Sogdian girls, clad in crimson robes with brocaded sleeves, green damask pantaloons, and boots of red deerskin, skipped, tripped, and twirled on the tops of balls rolling about on the dance platform, to the delight of surfeited hearts of the rich and noble. Hsuan Tsung was very fond of this dance …” (Schafer 1963:56). Dancing girls are recorded to have come to the imperial court in 713 and 727 in the dynastic annals (ibid.294 n.149).

“The Dance of Chach”, named for its place of origin near modern Tashkent, was done by two young girls, dressed in gauze caftans embroidered in many colours, with silver girdles. They wore the tight-sleeved blouses of the Far West… They appeared first to the audience emerging from the opening petals of two artificial lotuses, and danced to the rapid beating of drums. It was an amorous dance: the maidens ogled the spectators and, at the end, pulled down their blouses to reveal their bare shoulders” (ibid.55). A poet of the T’ang reminisces: “girdles droop from gilded thighs, flowered waists are heavy”. Beautiful girls trained as singers and dancers were sent from the Far West to China since ancient times.

Throughout history, Samarkand was closely associated with Bactria. 323 BC. Samarkand was the capital of Diadochi and belonged to the satrapy of Bactria.1st century, Annals of Wei (437 CE) state that the Cau-wu dynasty was ruling since the beginning of the Christian era. They were related to the Kushans.

202 BC-AD 220 (Han Empire) the chief city K’ang Chu of the K’ang-ku kingdom was K’ang. K’ang has been related with Sa.mo.kian (Samarkand) in the Annals of T’ang.

Samarkand also became the springboard of spreading Buddhism into China as a number of monks from Samarkand translated Sanskrit sutras into Chinese. These include K’ang Chu (AD 187). Between AD 705-774 Amoghavajva was the son of a brahmana from Samarkand. When ten years old, he travelled with his maternal uncle to China and became a disciple of Vajrabodhi. He translated 83 sutras. Significantly, Amoghavajra translated the ‘Dharana of Vaisramana who watches over armies for protecting Dharma’. Vaisramana was venerated in China and Japan as the God of War.

In 742 CE Arabs and four allies besieged the city of Anhsi. The commander of the Chinese armies demanded relief troops from Emperor Hsuan-tsung. The emperor said that it will take eight months for our troops to reach there and I do not know what to do. His guru I-hsing said: Invoke Vaisramana by the intervention of the Central Asian monk Amoghavajra. Amoghavajra conducted the rites of the Vaisramana-kalpa (T1247). The emperor received report after two months that the troops of the Arabs and allies got frightened because rats had gnawed the strings of their bows and they retreated. Thus Amoghavajra saved China from Islamisation.

(Prof. Lokesh Chandra is a renowned scholar, specializing in the study of the Vedic period, Buddhism and the Indian arts. Views expressed are personal and exclusive to India Narrative)

(This article first appeared in indianarrative.com)