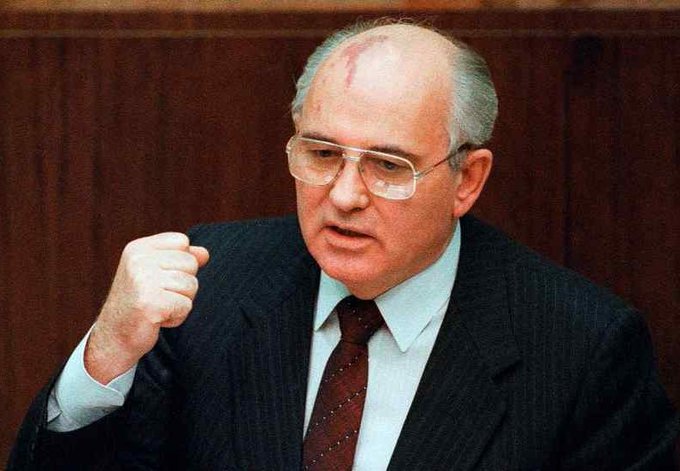 Mikhail Gorbachev remains an enigma to this day. The man who was instrumental in dismantling the Soviet Union, passed away on Wednesday at the age of 91. He is remembered as one of the most influential figures of the 20th century with former British prime minister Margaret Thatcher describing him “as a man we can do business with.” Former US presidents Reagan and Bush Sr., joined Europe in lauding him for bringing down the “Iron Curtain” erected post WWII.

But “Gorby” as he was christened by the West, found no adulation at home with people blaming him for the collapse of the USSR that unleashed one of the darkest periods in their economic history. There were shortages of every kind as the economy flatlined, inflation ate into pensions and everything in Russia was up for sale.

Russia watchers concede that the former Soviet leader had inherited a “dysfunctional state” where the arms race with the US and the war in Afghanistan was draining the Soviet economy. Gorbachev’s famous reforms, “Perestroika” (restructuring) and “Glasnost” (openness) did not match what was happening on the ground, says PS Raghavan, former ambassador to Moscow. “Perestroika did not restructure the economy on the lines he expected. Its failure was amplified by glasnost which saw overwhelming media criticism under the freedom of speech laws he had introduced which set the ground for fissiparous tendencies already prevalent within the Soviet Union.”

Gorbachev’s supporters counter-argue that while the former Soviet leader may have failed at home, he shone on the foreign policy front with the joint signing of the famous Intermediate Nuclear Forces treaty with then US President Ronald Reagan in 1987 abolishing a whole class of nuclear weapons. His end of the Soviet occupation of Afghanistan, his unilateral cutting down on the numbers of Soviet forces, and his abandonment of the ‘Brezhnev doctrine’ which was seen in his lack of opposition to a united Germany were key measures that he argued resulted in a peaceful transition in the post-Cold War period and freed up the Soviet economy to move money from defence spending into key domestic sectors of the economy.

But such victories needed to be seen in context. While the withdrawal of Soviet forces from Afghanistan was necessary it is fair to say that on the other measures he was mistaken. Gorbachev certainly made the mistake of taking the West at face value, a great mistake. Former US Secretary of State James Baker’s assurance of “not one inch eastward” when assuring the Soviet leader about Nato expansionism in their meeting in 1990 was as Raghavan points out, simply words. Nothing was ever given in writing. As for Germany, Raghavan states that during the ongoing negotiations “even some of the Western countries such as France and the UK were not keen on a unified Germany. They tacitly hinted to the Soviet leader that they wouldn’t mind him objecting and were surprised when he didn’t. Again, when a reunited Germany became part of Nato, Gorbachev did not object to it. It was based on a promise that Nato would not expand.”

The naivety shown by Gorbachev arguably laid the foundations for the crisis the Soviet Union is facing today against Nato expansionism. The self-same West which had lionised him did little to protest when a coup was launched against him by his trusted lieutenant Boris Yeltsin in August 1991. Though the coup failed, Gorbachev’s political standing had taken a hit and he resigned later that year. While some theories have been floated that Yeltsin’s coup was tacitly backed by the West who were at the time also supporting other democratic movements, such as Lech Walesa’s Solidarity movement in Poland, nothing has ever been proved. What is likely though is that Western leaders would not be unhappy to see Gorbachev go in such a manner. The end of the Soviet empire along with the fall of the Soviet leader to a political novice would crush Communism for good in their eyes. That was the final objective.

Such arguments have been believed by many Russians who crushed Gorbachev’s attempts to make a political comeback giving him less than 1% of the vote in the 1996 elections. What is interesting though today is that President Putin who has on several occasions described the collapse of the Soviet Union as the “greatest geo-political catastrophe of the 20th century,” has been careful never to mention Gorbachev’s name or blame him in any manner. The Russian president has on the contrary sent warm messages to the Soviet leader and Gorbachev responded in kind approving Putin’s policies such as the annexation of Crimea though he drew the line at the Russian invasion of Ukraine. Gorbachev’s words of warning would however fall on deaf ears as Russia and the West had moved on. The era of glasnost was well and truly over.