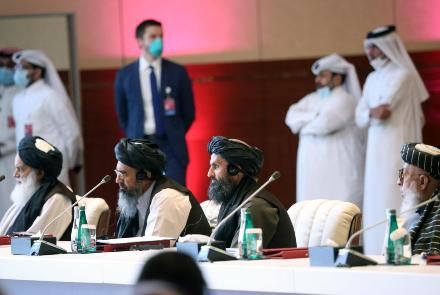 A lot has changed in the three years that have passed since you published an Open Letter to the American People (on February 14, 2018) and I responded with my own to you (in the New Yorker, February 27, 2018). Two years almost to the day after my letter, on February 29, 2020, the U.S. and Taliban signed an “Agreement for Bringing Peace to Afghanistan.” On the same day, the U.S. signed a joint declaration with the Afghan government pledging its commitment to peace and stability. Talks between the Taliban and other Afghans, including the government, were to start ten days later, but delays in implementing the release of prisoners held by the Afghan government pushed back the timetable, and the talks started only on September 12, 2020, six months later than planned.

As a result, the timetable set out in the agreement for the negotiations, leading to a political roadmap and ceasefire, was disrupted. The agreement foresaw fourteen months of negotiations before the U.S. withdrawal, scheduled to be completed on May 1, 2021, but now there were only eight months left. Several commitments made by the U.S. that were linked to the original timetable for the talks, for more prisoner releases and review of sanctions, also fell by the wayside. Violence has increased, and your negotiators in Doha refuse to meet those of the Islamic Republic until the Biden administration clarifies whether it will abide by the agreement, especially the troop withdrawal deadline. The spike in violence in the country has included the targeted killing of journalists and civil society activists. Only Afghans are being killed and fear of the consequences of these negotiations is growing. During the previous administration people often joked that the negotiations were threatened by a “Tweet of Damocles” suspended from the White House. Now the entire process seems to be hanging by a thread.

President Biden has said that the main U.S. effort will be diplomatic. On January 28, U.S. Secretary of State Anthony Blinken called Afghanistan President Ashraf Ghani to tell him “that the United States is reviewing the February 2020 U.S.-Taliban agreement” and examining “whether the Taliban are living up to their commitments to cut ties with terrorist groups, to reduce violence in Afghanistan, and to engage in meaningful negotiations with the Afghan government and other stakeholders”. The U.S. pledged in the agreement to withdraw all troops from Afghanistan by May 1, 2021, one hundred days, as it happens, after the inauguration of President Biden, but the agreement also says that all the commitments listed by Secretary Blinken are “interdependent.”

The day after he spoke to Secretary Blinken, President Ghani called on the U.S. to “take a very strong stand on the conditions-based approach” to implementing the agreement. A Reuters report attributed to four anonymous sources inside NATO claimed that some NATO members might keep forces in Afghanistan even after a U.S. withdrawal.

I might disappoint you when I say that I have no information about the U.S. policy review. Some people in the government ask me questions but they do not answer mine. I do have some idea of how such discussions go inside the U.S. government, however.

I am confident that the Biden administration will not decide unilaterally not to complete the withdrawal of troops by May 1, as recommended by the Afghanistan Study Group. That would amount to pulling out of the Doha agreement the way that the Trump administration pulled out of the JCPOA (the Iran nuclear agreement). President Biden does not want to keep troops in Afghanistan but his administration wants to implement the Doha agreement in such a way as to accomplish all four of its objectives, as listed by Secretary Blinken: troop withdrawal, counter-terrorism guarantees, a political settlement and a comprehensive ceasefire.

When the Biden administration says it is “reviewing” the agreement, it does not mean that it is deciding whether to respect it or not. The new administration needs to study the text, the confidential annexes that I have not seen as well as the diplomatic record of discussions with the Taliban, Afghan government, Pakistan, and others. After all, the neighbors of Afghanistan include China, Russia, India, Pakistan, and Iran—all countries high on the foreign policy agenda for many reasons.

Unfortunately, as I mentioned, the agreement is already not being implemented according to the timetable. The U.S. committed to the release of Taliban prisoners held by the Afghan government, with whom you refused to meet, within 10 days after the agreement’s signing. Negotiations between the Taliban and the supporters of the Islamic Republic of Afghanistan, including the government, were to start at the same time. Because of the government’s concerns, the prisoner release and therefore opening of talks took six months rather than ten days, and other items whose timing was linked to the talks have also been delayed. These include the release of remaining Taliban prisoners and the evaluation of sanctions against the Taliban.

The agreement states, “The four parts above are interrelated and each will be implemented in accordance with its own agreed timeline and agreed terms.” It does not say what the “agreed terms” are. Some of them may involve the interrelationship of the timing of the different parts of the agreement. Other agreed terms may include commitments that each side made to the other that are not included in the public text of the agreement.

The timing of the implementation of Taliban’s counter-terrorism undertakings is also unclear. According to the understanding of the U.S., the obligations are in effect from the signing of the agreement. You have claimed that the Taliban consider that they will be obligated to complete implementing their commitments only when the U.S. completes its obligations such as releasing prisoners, relaxing sanctions and withdrawing all troops. The Taliban, like the U.S., then, maintain that their obligation to implement their undertaking in the agreement is “conditions based.” Some additional negotiation may be required to reinstate the intended sequence of events and assure that both sides understand the inter-relationships and the timing of implementation in the same way.

The so-called “reduction of violence” has become a serious issue. The public text of the agreement says only that a ceasefire will be announced together with the future political roadmap when the Taliban and the Islamic Republic reach agreement. Apparently, though, in confidential annexes of the agreement, as well as oral undertakings given by Taliban representatives, the Taliban promised to observe certain limits on their offensive actions in addition to observing a truce with the U.S. Among these limits, reportedly, is the suspension of bombing and suicide attacks in major urban centers. Indeed, the Taliban have not carried out such attacks. Those that have occurred seem to be the work of IS/Daesh.

There has been, however, a wave of targeted killings of government employees and representatives of civil society groups and the media. The Taliban deny responsibility for these killings, and they may not be responsible for all of them. But IS/Daesh has shown it prefers mass casualty attacks. The Taliban have a dar al-ifta (a body issuing fatwas) attached to the Supreme Court which has for years had the responsibility of authorising targeted assassinations. The denials of responsibility by the Taliban for the recent targeted assassinations are not convincing.

Rather, it appears as if the Taliban have found a way to spread terror among parts of the population who support the current system of the Islamic Republic by means that appear technically not to violate their agreements with the U.S. The administration is likely to consider this wave of terror as a serious violation of the understandings between the two sides and an obstacle to negotiations.

I understand that both sides are waiting to see what decisions the Biden administration will make before they declare their positions. Some people in Kabul may well wish to delay the negotiations to pressure the U.S. into keeping its troops in Afghanistan. A very common interpretation in the U.S. and Afghan governments is that the Taliban are dragging out the talks so that they can win militarily after the U.S. withdrawal. I understand that there is a similar suspicion on the Taliban side that the Afghan government is delaying the talks in the hope that the Biden administration will delay or cancel the withdrawal of troops from Afghanistan. If the Taliban want to be more certain that the Biden administration will keep its commitments to withdraw troops, it should place a proposal for a political roadmap and a ceasefire on the table.

In a recent article I proposed a mutually agreed postponement of the May 1 deadline by six months to allow for the two sides to agree again on the sequence of events, including the release of prisoners, which will likely be contingent on reduction of violence, removal of sanctions, the implementation of counter-terrorist obligations, the troop withdrawal, the political settlement, and the ceasefire. Perhaps the deadline could be kept as is if Taliban committed to a six-month (or longer) ceasefire when the troops have all left. If the Taliban have other conditions for such a ceasefire, they should state them. However, the option of a ceasefire is much less attractive given the targeted killings. If Taliban do not admit responsibility for them, it cannot commit to stopping them. Ending these targeted killings may well be an important condition for resolving the current impasse.

I do not know what the Biden administration’s position will be. I believe it will support the talks in which you are supposed to be engaged in Doha, with the aim of reaching agreement with the Islamic Republic on a ceasefire and a future political roadmap for Afghanistan. I hope you will keep an open mind about renegotiating the timeline to assure that the agreement is implemented as intended.