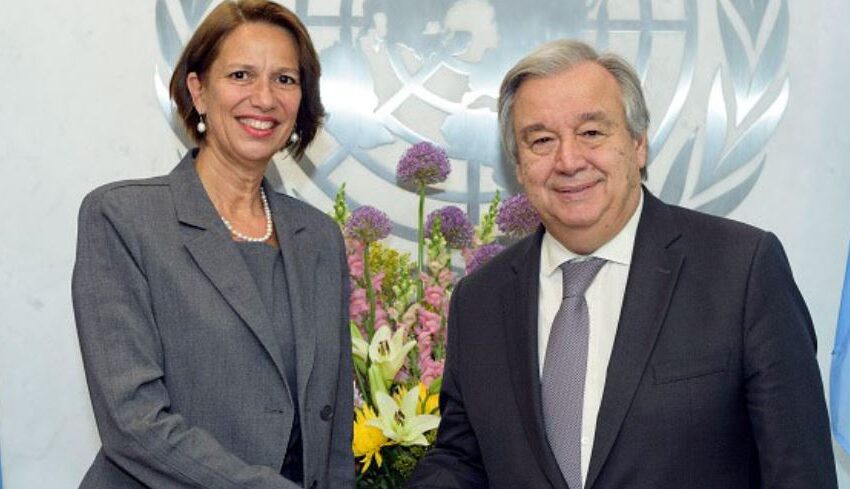 Under the previous military regime, Myanmar was known as a “diplomatic graveyard”, chiefly for the UN’s failed missions to the country on issues ranging from humanitarian assistance to national reconciliation between the junta’s old boys and their democratic opponents—primarily the now ousted and detained leader Daw Aung San Suu Kyi.

That bad reputation persists for the country, which has been undergoing a new bout of military rule since February. Just ask Christine Schraner Burgener!

On Tuesday, the 58-year-old, who has been the UN’s special envoy for Myanmar since 2018, acknowledged that she is the latest diplomat to be consigned to the graveyard, tweeting that her efforts to facilitate an “all-inclusive dialogue in the interest of the people were not welcomed by the military,” confessing that her months-long attempts, in the wake of the takeover, to persuade the coup leaders in Naypyitaw to engage in dialogue to settle the ongoing political and social turmoil caused by the coup had failed. Her term will end soon.

“I regret this clear lack of will for a peaceful solution which could have prevented other stakeholders from feeling they have no choice but to seek violent means,” the Swiss diplomat wrote.

She is right to feel regretful, especially after her “several talks” and “long conversation” over the phone with the regime’s second in charge in Naypyitaw, in which she urged him to engage in dialogue, bore no fruit. Another blow to her efforts was dealt by Myanmar’s shadow National Unity Government (NUG) with its recent declaration of revolt against the regime. The parallel government largely made up of elected lawmakers from the Daw Aung San Suu Kyi-led ousted National League for Democracy (NLD) government and its ethnic allies reasoned that it had no option but to resort to armed resistance due to the “diplomatic failure” to pressure the regime to stop its arbitrary killings and arrests of civilians, among other atrocities, and restore to the NLD the political power it seized through the coup. For someone who lobbied for a “peaceful solution” in Myanmar, nothing could be more depressing than learning that a majority of Myanmar’s people heartily embraced the NUG’s call to arms.

Myanmar people have good reason to support the NUG’s declaration. By the time Schraner Burgener pressed “Tweet” on her apologetic post about her failed Myanmar mission on Tuesday, 1,089 people had been killed by the regime since February. Another 6,477 had been detained. As they have had firsthand experience of successive regimes’ brutality following coups in 1962, 1988 and now in 2021, many in Myanmar are skeptical of the nonviolent or peaceful approaches favored by the international community, because those means have historically proved ineffective in taming the rogue soldiers who hold power in Myanmar.

As the UN special envoy to Myanmar, Schraner Burgener first talked to the regime’s No. 2 leader three days after the takeover. During her phone call to Vice Senior General Soe Win, she warned him that the world’s nations and the UN Security Council “might take huge strong measures” against the regime and that Myanmar would become isolated.

“We are used to sanctions and we survived those sanctions in the past. We have to learn to walk with only a few friends,” the special envoy quoted him as saying, during a press conference in March.

Since then, the diplomat said, she has spoken several times with the deputy commander-in-chief, whom she described as “always open for my request for meeting” to have “frank and open discussions”. She tried to get the regime’s permission to visit the country, but in vain. At the same time, the regime’s killing spree continued. Despite its condemnation of the coup and subsequent atrocities, the UN proved to be toothless on the Myanmar issue, as China and Russia stood against any resolutions proposed at the Security Council that were critical of the regime.

In her effort to find a peaceful solution to the political crisis in Myanmar through dialogue, Schraner Burgener reached out to every stakeholder. She said the country’s ethnic armed organisations “were in the majority very positive of this idea” while the NUG members were “interested in the idea but clearly would have pre-conditions to start such a dialogue.” When she presented her idea of an inclusive dialogue during her long conversation with the regime’s second leader Soe Win in July, “I didn’t receive an answer: not a positive, not a negative,” she recalled during a briefing to journalists in August.

Despite the regime’s rebuffs, she refrained from making harsh criticisms of it until now, apart from condemning its crackdowns on protesters. When the junta said no to her request to visit Myanmar, she never took it as a message that they didn’t want to talk to her anymore.

“But I assumed that people on the ground would be very encouraged by my presence in the country and that’s something the army doesn’t want to see,” she said, as if she knew the thinking of the regime. Probably her several talks with Soe Win over the months made her think so. It would be interesting to see what she thought of the second-most-powerful person in the Myanmar regime—a moderate or a hardliner?—as the meetings must have left her with some impression of him. With Tuesday’s tweet, Schraner Burgener has made public her view that the Myanmar regime clearly lacks the will to find a peaceful solution to the country’s crisis through dialogue. But she must have seen the writing on the wall before that. She said in August when Senior General Min Aung Hlaing appointed himself prime minister that he would seek to maintain his grip on power. The junta’s annulment of the results of the November 2020 election, which was won by Daw Aung San Suu Kyi’s party, prompted the UN diplomat to express her fear that the NLD would soon be disbanded.

Bertil Lintner, a Swedish journalist who has covered Myanmar for decades, said the call for dialogue was doomed to fail from the beginning because the junta is interested only in maintaining power, not in engaging in talks or to compromise with its adversaries. “So it’s hardly surprising that people in Myanmar have resorted to armed struggle against the junta,” he said.

As recently as last month, the Swiss diplomat was still hoping that the recent appointment of an ASEAN special envoy on Myanmar would bring an all-inclusive dialogue, as the regime approved the appointment. The ASEAN envoy called for a truce in Myanmar. But, with the NUG’s declaration of war and the regime’s ongoing attacks on civilians in the country, Erywan Yusof’s call for a truce was thrown out of the window.

It took Schraner Burgener nearly seven months to see the Myanmar military rulers’ true colours. Coming to her senses, she finds herself in the diplomatic graveyard. “Never Waste Your Time With the Generals in Naypyitaw!” would make a perfect epitaph for her. Yusof will no doubt be her neighbour soon.