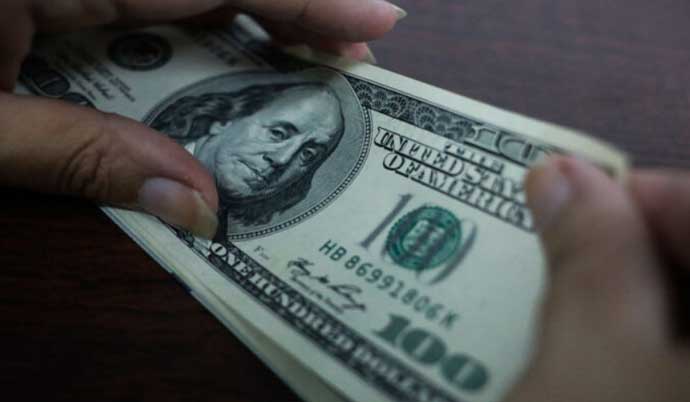 An employee counts US dollars at a money changer in Yangon in 2015. (Photo: The Irrawaddy)

Strapped for hard currency, the Myanmar junta has moved to seize foreign currencies in the country by ordering that foreign exchange earned by locals must be converted into the local currency at the “official rate” within “one working day”.

Financial experts and the business community voiced concern that the order would not only hurt the country’s US dollar-dependent export-import industry but also worsen inflation, adding to the already severe burden on the people of Myanmar, whose economy has been in a downward spiral since the military coup in February last year.

In a notice dated April 3, the junta-controlled Central Bank of Myanmar said foreign currencies must be deposited in accounts at licensed banks and exchanged for the local currency within 24 hours. It said the new directive would also apply to foreign currency that came into the country before April 3.

Those who fail to comply would face legal action under the Foreign Exchange Management Law, it said.

The central bank’s official exchange rate is currently 1,850 kyats per US dollar. However, the rate is around 2,050 in the market, meaning exporters and foreign currency account holders will be hurt by the new policy.

The regime didn’t offer any reason for the order.

However, financial experts suggested the new policy showed the regime is suffering a dollar deficit and is desperate for hard currency to pay its debts—estimated to amount to at least US $10 billion—and purchase key supplies such as oil, gas and weapons, mainly to combat the growing armed resistance in the country.

Myanmar’s military regime has been hit hard by a series of international sanctions over the coup it staged against the democratically elected government last year, and its subsequent brutal crackdown on protesters. So far the junta has killed more than 1,700 people. The takeover also prompted the departure of foreign investment from industries ranging from brewing to the energy sector, leaving the country’s economy in disarray. International assistance programs have also been put on hold since the coup.

“They cannot get loans from the World Bank, ADB [Asian Development Bank] and JICA [Japan’s development agency] and the exemption period to pay back loans due to COVID-19 will end soon. So, they need to repay the loans. That’s why they want to control the US dollars in the country,” a local observer said.

The central bank has not imposed restrictions on dollar transactions since 2012; anyone in the country had been able to buy and sell dollars freely since then.

“But now, once you deposit the foreign currency at the bank, it is automatically bought at 1,850 kyats per dollar. You have no choice,” said local businessman Dr. Soe Tun.

One economist who asked for anonymity said the move could see the country’s exports grind to a halt, and may ultimately affect agricultural produce growers, who depend on imported fertiliser.

“Not only exporters, but also local farmers that grow export items will be hit as a result. How much foreign currency does the central bank still have? And can the bank manage it? It appears that the bank can’t. Its new policy will only worsen the situation. As far as I know, they are still holding one meeting after another on how to proceed with its policy,” he told The Irrawaddy.

Furthermore, Myanmar’s banking sector has been in chaos following the coup. Shortly after the coup, the central bank limited cash withdrawals from banks and automated teller machines, restricting the cash flow as many customers rushed to take out their money fearing the possible economic consequences of the takeover. The bank has eased restrictions over the past year but individuals, unable to withdraw as much money as they want from their savings accounts in banks, have to pay around 3 per cent to mobile money agents in order to withdraw cash from their mobile wallets. In the early days after the coup, they were paying at least 7 to 10 per cent.

A local financial expert said the central bank’s new policy would push dollar exchange transactions into the black market, as the bank cannot sell all the US dollars that import companies need.

“The importers will have to struggle to get US dollars on the black market at a higher price. As a result, the cost of their products will be high and inflation will rise,” he said.