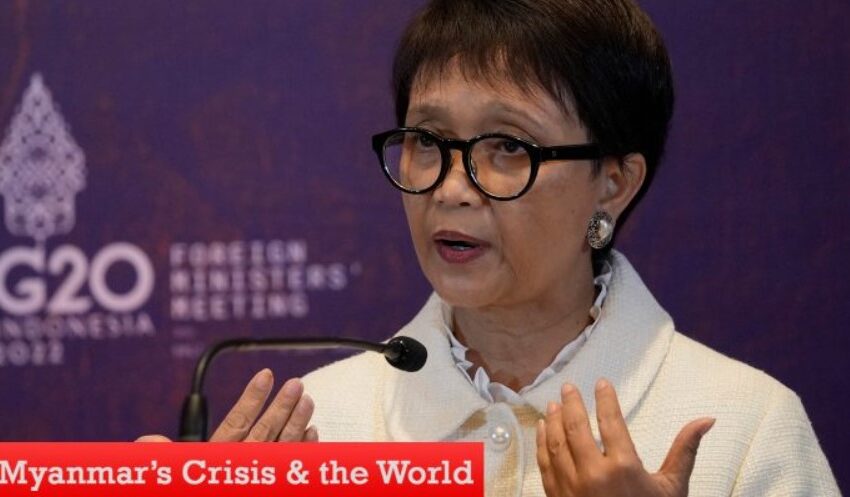 Indonesia, the incoming chair of the Association of Southeast Asian Nations (ASEAN), says other countries including India must get behind the bloc’s peace effort for Myanmar, which has been engulfed by violence since a coup last year.

Retno Marsudi, Indonesia’s foreign minister, urged other regional powers to support ASEAN’s “five-point consensus” for peace, which includes an immediate end to violence in Myanmar and dialogue among all parties. Indonesia will chair the bloc next year.

Marsudi told Indian newspaper The Hindu that the regional bloc’s ability to tackle the crisis will be hampered if other countries take a different approach to Myanmar. “We repeat, please respect ASEAN, please support the five-point consensus,” she said, adding that “if you [act] differently, that will not help us to be effective and to help Myanmar out of this political crisis.”

Myanmar, a member of ASEAN, has been engulfed in violent turmoil after a wide-scale rejection of the coup triggered a nationwide armed uprising to topple the military regime. In response, the junta has launched a campaign of airstrikes, extrajudicial killings and arbitrary arrests against resistance forces and civilians. So far it has killed more than 2,500 people.

The five-point consensus was forged by the bloc last year, but all five points have been ignored by the military regime, which has escalated its campaign of violence.

Amid rising international pressure over the peace plan’s lack of progress, ASEAN leaders meeting in November vowed to add a timeline for its implementation. The bloc also warned the regime it would face tougher ASEAN measures if it failed to abide by the plan.

Meanwhile, ASEAN’s special envoy to Myanmar cancelled his third trip to the country over what observers said was a lack of progress on the junta’s side. The bloc then took the unprecedented step of banning the regime’s defence minister, General Mya Tun Oo, from the ASEAN Defense Ministers meeting late last month. It had previously allowed some junta ministers to attend its meetings while banning regime boss Min Aung Hlaing and his foreign minister from summits.

Indonesia’s warning to India and other countries comes as Delhi forges closer relations with Myanmar’s junta on the diplomatic, economic and military fronts. India’s Foreign Secretary Vinay Kwatra visited Naypyitaw last month for meetings with the junta’s boss and other ministers. The official statement issued for the visit made no mention of the five-point consensus.

Marsudi said she had discussed support for ASEAN’s peace plan with India’s External Affairs Minister S. Jaishankar in September on the sidelines of the UN General Assembly. India claims that its ties with Myanmar’s regime are important to prevent incursions by militants across their porous border and to balance the influence of regional rival China.

Beijing retains tight links with Naypyitaw, especially due to its Belt and Road projects in Myanmar but openly supports ASEAN’s peace plan for Myanmar.

Another country that enjoys warm relations with Myanmar’s junta is Russia. Its leader Vladimir Putin met with Min Aung Hlaing in September, after which both countries launched cooperation in economic, energy, tourism and other sectors.