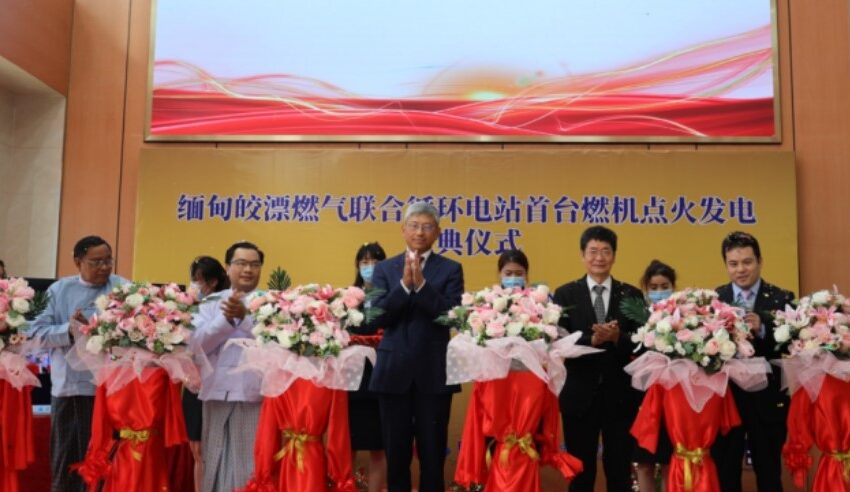 A Chinese-backed power plant that forms an important part of the China-Myanmar Economic Corridor (CMEC) scheme in Myanmar’s western Rakhine State opened this week, signaling that Beijing is moving forward with its projects in post-coup, conflict-torn Myanmar.

The US $180-million, gas-fired 135-MW power plant in the Kyaukphyu Special Economic Zone (SEZ) was opened by Chinese Ambassador to Myanmar Chen Hai and the regime’s deputy minister for electric power, Dr Aung Zeya, according to Myanmar state-owned media.

China is a major investor in Myanmar and has placed importance on projects that will give it access to the Indian Ocean. A crucial part of Beijing’s Belt and Road Initiative, the estimated 1,700-km-long CMEC will connect Kunming, the capital of Yunnan Province in southwest China, with Myanmar’s major economic hubs—linking first with Mandalay in central Myanmar, then forking east to Yangon and west to the Kyaukphyu SEZ in Rakhine State.

Hailing the Kyaukphyu power plant as evidence of successful bilateral cooperation between China and Myanmar in the power sector, the Chinese ambassador said the power plant would play a key role, as Kyaukpyu is an important hub on the CMEC, and talked about further cooperation in all sectors in Myanmar.

With Myanmar facing a massive power shortfall amid growing domestic demand, China has become its major electricity supplier, including through cross-border power interconnection projects, due to its lower prices, among other factors.

From Rakhine State in the country’s west to Kachin in the north, planning or construction of power projects backed by mammoth Chinese state-owned enterprises (SOEs) is underway in at least seven states and regions. The agreements were made under the now ousted National League for Democracy (NLD) government.

Chen said Chinese companies are now implementing many power projects including hydro power plants in Ye Ywa in Mandalay, Paung Laung in Naypyitaw and Tha Htay in Rakhine; natural gas-fired plants in Tha Hton in Mon State and Thaketa in Yangon; and a solar plant in Minbu in Magwe Region.

According to the Chinese Embassy in Myanmar’s Facebook page, the ambassador said during the opening ceremony that Myanmar-China cross-border power interconnection projects are accelerating, and China is now “calmly discussing and implementing the important projects like [the] Kyaukphyu SEZ and China-Myanmar interlink Ruili-Kyaukphyu railway.”

The comments come as Myanmar is in social and political turmoil sparked by the military coup last year.

Unlike other countries that condemned the takeover, China referred to it as merely “a cabinet reshuffle.” Along with Russia, it has backed the regime at the UN, leaving the Security Council unable to take action against the regime, which has killed more than 2,300 people so far.

During a visit to China in April this year, the regime’s foreign minister, Wunna Maung Lwin, received a warm welcome from his Chinese counterpart Wang Yi. Beijing said it would help safeguard Myanmar’s sovereignty, independence and territorial integrity “no matter how the situation changes”.

In July, Wang reaffirmed his country’s continued support for Myanmar’s military regime, vowing to protect its neighbour and its legitimate interests.