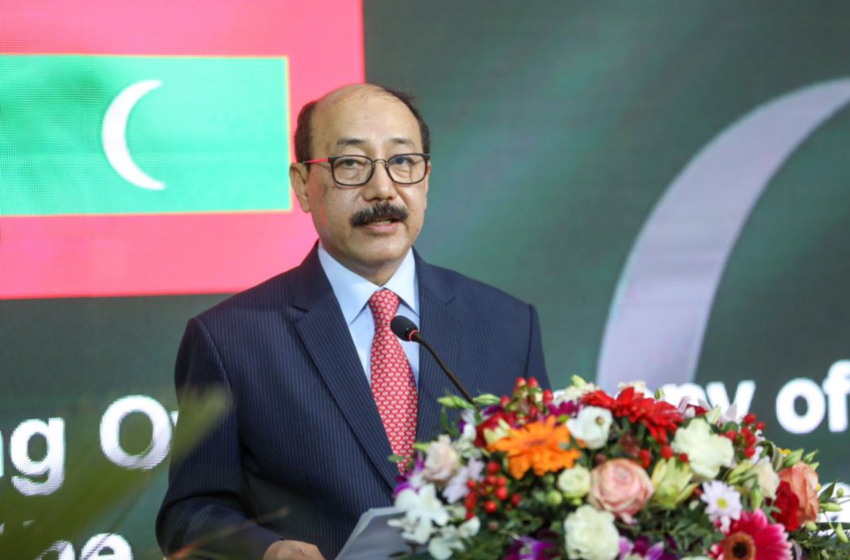 Foreign secretary Harsh Vardhan Shringla speaking at the National Stadium in Malé during his two day visit to the Maldives.

NEW DELHI: India and the Maldives have signed an MoU for what is billed as the largest every infrastructure project in the island nation — a $100 million grant from India for the Greater Malé Connectivity Project which will link the capital with the three islands of Vilingili, Gulhifalhu, where a new commercial port will come up, and Thilafushi where an industrial zone is being set up.

The islands will be linked through a causeway nearly 7-km long for which India announced a $400 million line of credit last month.

The MoU was among the four inked during the visit of foreign secretary Harsh Vardhan Shringla, who called on President Ibu Solih, foreign minister Abdulla Shahid and defence minister Mariya Didi, on Monday. He will meet opposition party leaders on Tuesday before returning to Delhi.

Other MoUs signed during the visit included two for High Impact Community Development Projects (HICDPs) and another one for cooperation in sports and youth affairs.

Shringla said, “the project will conform to the hallmarks of Indian development cooperation; transparency; full participation and ownership of the host country; and competitive pricing. We see an economically strong, resilient and prosperous Maldives as fundamentally in India’s interest.”

His visit was also an opportunity to underscore that democracy and transparency was the key to India’s neighbourhood outreach. As Shringla pointed out, the projects “are demand-driven and will involve the Maldivian government at all stages. The tendering process and award of contract will also be done by the Government of Maldives.”

And in an oblique dig at China’s authoritarian model of development, he said “Both India and the Maldives have placed an abiding faith in democracy. India stands with Maldives on this chosen path of democracy, to assist your democratic journey.”

The foreign secretary also said, “We see an economically strong, resilient and prosperous Maldives as fundamentally in India’s interest.”

He made similar remarks while speaking at the National Stadium in in Malé during a ceremony to mark the handing over of equipment for 67 children’s parks. Shringla said, “the underlying principles of India’s development cooperation of transparency, competitive pricing and ownership of the host country will be adhered to in the implementation of the GMCP project”.

The foreign secretary also assured the Maldivians that development projects executed by India “are demand-driven and will involve the Maldivian government at all stages. The tendering process and award of contract will also be done by the Government of Maldives”.

Some diplomatic signalling followed where he indicated support for Maldives candidate foreign minister Abdulla Shahid as president of the UN general assembly session next year. Maldives has backed India at the OIC and thanks were in order.

Shringla also confirmed that India will share with the Maldives the Covid-19 vaccine once it’s been developed. The island has reported 40 deaths due to the coronavirus and more than 800 active cases.