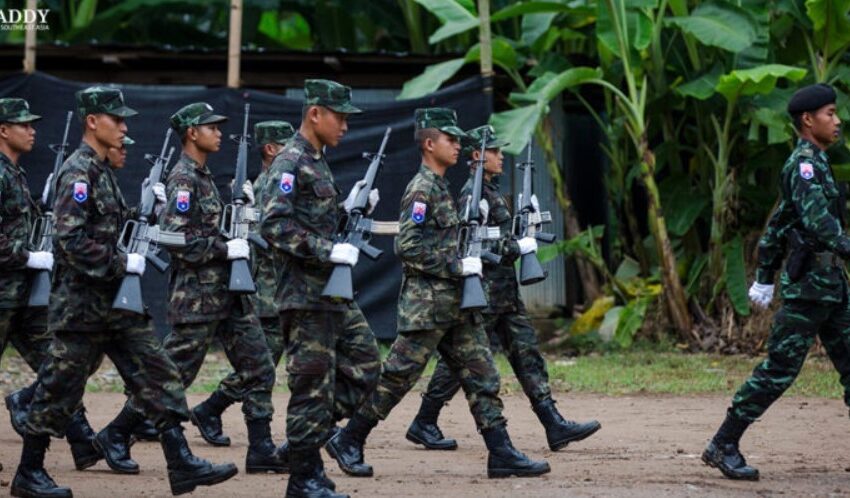 YANGON: In the month following the military’s February 1 coup, many of Myanmar’s ethnic armed organizations (EAOs), which have been warring with the central government for decades, said they opposed the junta’s overthrowing of the democratically-elected civilian government.

When the Myanmar military killed anti-regime protesters, people in urban areas longed for help from the EAOs in their fight against junta, believing that an armed response is the best hope of stopping the military’s atrocities against unarmed civilians.

But in the three months since the coup, only a few of Myanmar’s 20 EAOs have actually been helping pro-democracy supporters as they “could not bear to watch the civilians being killed brutally by the junta”. The majority have just paid lip service to backing up anti-regime protesters by saying that “the regime will have to take responsibility for what they have done.”

EAOs support for Myanmar’s anti-coup protesters takes several forms. Their attacks on the Myanmar military in border areas hits the regime as they have to deploy more troops to the frontlines, while also having to oppose anti-regime protesters. The EAOs are also providing shelter to those fleeing the junta and offering military training to the young and enthusiastic urban protesters who have gone underground to join the armed struggle against the military dictatorship.

Since March, fierce fighting between the KIA and the Myanmar military and between the KNLA and regime troops has erupted in several locations in Kachin State, northern Shan State, Karen State and Bago Region. News of the fighting has provided encouragement for people sick of the military’s atrocities against protesters and civilians.

In Kachin State, regime troops lost a strategic hill base to the KIA, while in the south, the Karen soldiers of the KNLA seized a military outpost near the Thai border. In both areas, regime troops have suffered mounting casualties and seen some soldiers captured.

The KNU, Myanmar’s oldest ethnic political party, has opposed the military regime since the coup. Its chairman, Padoh Saw Mutu Say Poe, has refused to meet with junta leader Senior General Min Aung Hlaing until his troops stop killing civilians and release all people detained since the coup. The KNU rejected the regime’s invitation to attend the Armed Forces Day parade on March 27.

The KNLA, the military wing of the KNU, seized an outpost near the Salween River in Thi Mu Hta held by the military’s Light Infantry Division 349 on the day of the junta’s Armed Forces Day parade. The KNLA’s Brigade 5 killed 10 soldiers, including an officer, and captured eight soldiers.

Brigade 5 is one of the KNLA’s units that has not stopped fighting Myanmar’s military, despite the KNU signing the nationwide ceasefire agreement in 2015. For the past three years, the military has expanded its territory in the area controlled by Brigade 5 and launched systematic attacks on civilians. In December, the KNLA warned the military of severe consequences if they refused to withdraw their troops.

On April 27, exactly one month after capturing Thi Mu Hta, Brigade 5 overran a military border post on the banks of the Salween River in Thaw Le Hta, near the border with Thailand’s Mae Hong Song Province. At least a dozen of regime troops were killed. The military retaliated with airstrikes against the Brigade 5 area, as it did after the capture of Thi Mu Hta, causing some 30,000 local residents to be displaced.

Brigade 5 spokesman Lieutenant Colonel Saw Kler Doh told The Irrawaddy that the KNLA’s attacks are to show support for civilians and the newly-formed National Unity Government set up by elected lawmakers from the ousted National League for Democracy (NLD) government.

Lt.-Col Saw Kler Doh said: “We are doing what we can to show that seizing power by force and shooting unarmed people is unacceptable. We have to do what we can to support the people”.

After a 17-year ceasefire broke down in Kachin State in 2011, the KIA has largely maintained a defensive position in clashes with the Myanmar military. However, after the coup, they began launching attacks against the regime in several key locations across Kachin States and northern Shan state with an intensity not seen since 2018.

The KIA have stormed more than a dozen military and police outposts in Kachin’s Waimaw, Momauk, Hpakant, Tanai, Mogaung, Shwegu and Injangyang Townships. Moreover, they have attacked a number of military convoys bringing reinforcements to troops fighting the KIA and launching crackdowns on anti-coup protesters in Kachin.

Soon after the coup, the KIA asked the military’s Northern Command via the Kachin-based Peace Creation Group not to harm peaceful Kachin people protesting against the junta. But two men died when the military opened fire with live rounds on anti-regime protesters in Myitkyina on March 8. Three days later, the KIA attacked a military outpost in the jade-mining hub, Hpakant.

The KIA threatened to step up its attacks if the junta continued to shoot peaceful protesters across the country. On March 15, the KIA raided another military outpost in Injangyang Township. Ten days later, the KIA occupied the strategic Alaw Bum base in Momauk Township near the border with China, which had been occupied by the military since the early 1990s.

Thousands of regime soldiers have been sent as reinforcements to Momauk Township and there have been almost daily airstrikes in their efforts to recapture the base. But the regime has lost more than 100 troops killed, including a battalion commander, and the KIA has also captured around 50 soldiers during the clashes.

In late March, the KIA attacked a police station in Kyaukgyi village-tract in Shwegu Township, Kachin State, saying that the attack was carried out because police are involved in lethal crackdowns on anti-military regime protesters.

The KIA also attacked two police outposts and a military base at Tarpein Bridge in Momauk Township on April 11. Following the attack, four civilians were killed when artillery shells fired by Myanmar’s military landed in Myohaung, Myothit and Sihike villages. On April 15, the KIA attacked a base in the area of Nam Byu in Tanai Township, which the military had captured from the KIA in 2018.

Currently, there is intense daily fighting in Momauk, Putao, Bhamo and Hpakant Townships. KIA information officer Colonel Naw Bu said the military has been especially active in its efforts to recapture the Alaw Bum base.

Pro-democracy activists have expressed their support for the KNU and the KIA since the fighting began in Kachin, Karen and Shan States. Young people in major cities have taken to the streets holding placards reading “We support KIA and KNU”.

Until now, people living in Myanmar’s cities have not experienced the brutality of the regime’s soldiers at first hand. But residents of the borderlands have long suffered at the hands of the military. Now, Myanmar’s peoples are coming together in unity to reject the military dictatorship.

“I never thought that the majority of Burmese people would support the ethnic armed groups,” Seng Bu, a Kachin activist based in Myitkyina, told The Irrawaddy. “The situation has completely changed. Burmese people now realize what ethnic people have suffered for generations,” she said. “We are very united now,” she added.

While the majority of Burmese people support the EAO’s, thousands of ethnic people in Kachin, Karan and Shan States are fleeing from their homes as a result of the fierce fighting. In response to the KIA and KNLA’s attacks on security outposts, the military has retaliated with airstrikes on villages in Kachin and Karen States.

There have been frequent airstrikes on villages in Momauk Township since mid-April. In the latest fighting, fighter jets bombed villages for six days, forcing 5,000 villagers to flee from their homes. Nearly three dozen homes in Myothit village alone have been destroyed by the airstrikes, according to residents.

More than 10,000 people have been displaced in Injangyang, Hpakant, Momauk, Myitkyina, Shwegu and Waimaw Townships in Kachin State, according to the United Nations Office for the Coordination of Humanitarian Affairs (OCHA) and local humanitarian groups. Most of them have taken refuge in churches and monasteries in Momauk.

“More and more residents are sheltering in churches. Churches are already flooded with people,” a representative of the Kachin Baptist Convention (KBC) said. “We are expecting more people. But we don’t have enough space,” he said.

Rev. Dr Hkalam Samson, president of the KBC, told The Irrawaddy that the coup has not only created a new humanitarian crisis, but also stopped the refugee repatriation process led by the Kachin Humanitarian Concern Committee (KHCC), a joint strategy team.

Formed by various Kachin religious and community-based NGOs under the NLD government, KHCC is trying to facilitate the return of refugees. More than 100,000 civilians have been displaced since 2011. Most of them are in camps or temporary shelters in both government-and KIA-controlled areas.

“As long as the fighting continues, the number of refugees will continue to rise,” he added.

OCHA has estimated that around 40,000 people have fled their homes in Papun District in Karen State and Shwe Kyin, Kyaukkyi and Nyaunglebin Townships in Bago Region, following the coup and military airstrikes in the areas. An estimated 1,000 refugees—mostly elders, the sick, women and children—have taken refuge in Thailand.

On Thursday, a total of 41 Karen civil society groups asked the Thai government to grant temporary asylum to people displaced by the airstrikes.

Young People Take Up Arms In Kachin And Karen States

The military’s brutal crackdown on anti-coup protesters—including killings, arrests and torture—has pushed some young people to take up arms against the regime.

Thousands of young people including students, doctors and engineers have sought refuge in ethnic areas, mostly in Karen and Kachin States. They are undergoing military training as most of them have a dream of fighting back against the regime and returning the country to civilian rule.

“You might say everything seems to be so depressing these days. You might ask me, has the regime already won? Absolutely not. People will fight against them. The people training in the jungle will restore our lost democracy,” she said.