With Biden, MBS Has A Reputation To Defend; Can He Get It Ri... 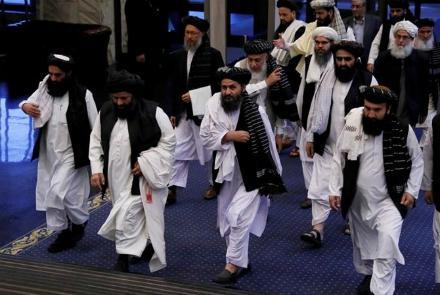 KABUL: A draft of a Taliban charter consisting of a list of rules, presumably intended as a guide for the potential future governance of Afghanistan, was shown to TOLOnews by a government source. Titled “The charter of the Islamic emirate of Afghanistan,” the list of articles looks very similar to those of the former Taliban regime, which was in power in Kabul from 1996 to 2001.

The charter, which calls for the establishment of an Islamic emirate, has 149 articles which include a broad range of topics covering how laws will be passed to the mandate for a white flag.

The charter suggests that the Taliban’s plans for their “future government” are not very different from the policies of their former regime.

According to the document, final decisions in all affairs are made by the emir, and the Islamic emirate is not obliged to implement United Nations laws that are in contravention of Islamic values.

The charter says that free speech, human rights, and civil rights are to be implemented within the framework of Islamic teachings.

The charter clearly states that “an Islamic emirate” will be the system of governance, and says that proposed legislation will be enacted only after bills are agreed upon by the “leadership council,” the “ulema council” (religious leaders), as well as the emir or his deputy.

Throughout the charter, the authority of the ulema council, and its interpretation of Islamic sharia law, is firmly established.

Jalaluddin Shinwari, a former Taliban member who served as the chief justice during the Taliban regime in Kabul, said the Taliban still wants an Islamic emirate. “So far this is their demand,” said Shinwari.

Significantly, the language of the charter suggests that executive leaders will not be decided through an election, as called for in the Afghan Constitution, but rather by way of the Ahl al-hall wal-aqd – “the people of losing and binding,” a term used in a political context in Islam that gives authority to a group qualified to appoint or remove a leader.

A new emir can also be selected by the choice of the outgoing emir.

The draft of the charter also states that the emir has the “full authority” to select or remove any member of the Islamic emirate and “no one has the right to violate his decision.”

Article 45 says the Islamic emirate has two councils in its structure: the leadership council and the ulema council – that will help in expediting and improving political activities and in solving problems.

Although the policies in the charter are dramatically different from those established by the current Afghan Constitution, some analysts say the selection of the future government is the choice of Afghans, and even an emirate can be established if it is the will of the nation.

“A republic or another type of government will be established if the nation wants it,” said Faiz Mohammad Zaland, a university lecturer.

Article 63 says the ulema council prepares all legislations, decrees and laws of the Islamic emirate within the framework of the Islamic sharia, which alarms many individuals and groups who worry about losing rights granted by the Afghan Constitution.

Human rights, women’s rights, freedom of speech, the Afghan media, and girls education are among the country’s achievements after 9/11, and activists and analysts say these gains should not be ignored in the peace process.

The deputy head of the Afghanistan Independent Human Rights Commission, Mohammad Naeem Nazari, said the contents mentioned in the charter are “clearly contradicting” the values of democracy and human rights.

The charter does not give details on the education of women and girls.

Also included is the article of al-amr bi-l-maʿrūf wa-n-nahy ʿani-l-munkar (Ordering the good and forbidding the evil), which refers to the department that applies harsh punishments to those convicted of crimes. But there is a line stating that this will be “reviewed” if it needs an amendment.

Human rights activists say that practicing such rules mentioned in the charter will take the country back to where it was at the end of the Taliban regime in 2001.

The head of the Kabul-based Afghanistan Human Rights Organization, Lal Gul Lal, said Afghans “should not start from the beginning once again.”

He said the country has “advanced through many phases” in democracy, freedom of speech and human rights.

The Taliban has not commented on the charter.

This comes as delegates of the Afghan government and Taliban members are expected to begin intra-Afghan negotiations in the near future.

With Biden, MBS Has A Reputation To...