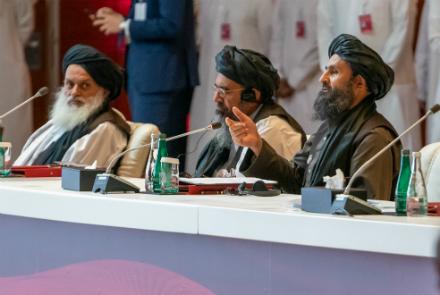 A breakthrough is reported from Doha as the two negotiating teams have agreed to include the U.S.-Taliban deal, UN endorsements for Afghan peace process, commitments of the negotiating teams and will of the Afghan people as the base for upcoming negotiations.

The Islamic Republic and the Taliban’s negotiators in Doha are tight-lipped and have not made any comments on recent progress.

This as the negotiators from both sides met with U.S. Secretary of State Mike Pompeo in Doha on Saturday.

The Afghan Republic negotiators said, in their meeting with Pompeo, they insisted on an end to violence and called for preserving Afghanistan’s achievements. “Concerns of members of the peace delegation about the increase in violence and the U.S. support to the Afghan peace negotiations, which is a common goal, were discussed,” said Habiba Sarabi, a peace negotiator from the Islamic Republic of Afghanistan.

The Taliban said, in their meeting with Pompeo, they insisted on implementation of the Doha agreement, removal of names of Taliban members from the UN blacklist, release of their prisoners and the peace negotiations. “The release of remaining prisoners of the Islamic emirate of Afghanistan and ending the blacklists and also issues around intra-Afghan negotiations were discussed,” Taliban spokesman Mohammad Naeem said.

The U.S. State Department in a statement on Pompeo’s trip said Qatar has been an important partner in fostering peace in Afghanistan and has played an invaluable role as host for Afghanistan peace negotiations.