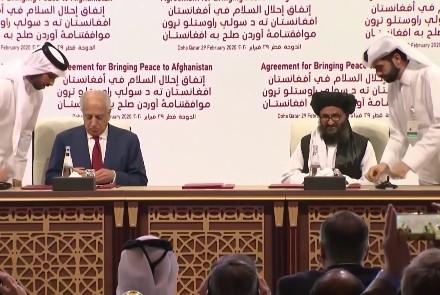 NEW DELHI: As the deal signed between the former U.S. administration (led by President Donald Trump) and the Taliban marked one year on Sunday, the Afghan government said that the accord did not end up with the expected results as violence in the country has increased. But the Taliban says it is a practical step towards achieving peace and stability in the country.

The deal was signed after 18 months of talks between the U.S. negotiating team led by special envoy Zalmay Khalilzad and the Taliban negotiators in Doha. The United States agreed to withdraw its troops from Afghanistan by May 1 and the Taliban committed to cutting their ties with al-Qaeda and other terrorist groups and not allow them to operate on Afghan soil.

“They (Taliban) have committed to cut their ties with terrorist groups; however, according to information obtained by the government, they have not cut these ties,” State Minister for Peace Affairs Sayed Saadat Mansoor Naderi said.

“There isn’t anything in this agreement to give hope to Afghans. This has made progress in the peace process fragile,” said Rahmatullah Andar, Spokesman for the National Security Council.

Based on the agreement, intra-Afghan talks between negotiators from the Islamic Republic of Afghanistan and the Taliban were supposed to begin 10 days after the deal was signed but was delayed due to differences over the release of 5,000 Taliban prisoners by the Afghan government, something which was later approved by the Loya Jirga, the grand council, convened by President Ghani.

“Afghans expected that violence would end when the deal was signed but this did not happen and instead it increased,” President Ghani’s special envoy for Pakistan, Mohammad Umer Daudzai, said.

Finally, the Afghan government released over 5,000 Taliban prisoners and intra-Afghan negotiations began on September 12 at a ceremony in Doha. The two sides continued their discussions for three months but were able only to agree on procedural rules of the negotiations.

Later on, both sides began discussions on the agenda of the talks but these were stopped for two weeks so that both sides could discuss issues with their leaders.

The first round of talks between the Afghan Republic and the Taliban negotiators continued for three months and was prolonged due to differences over the religious basis for the talks, the relation of the U.S.-Taliban deal with the talks and the future government setup.

“Only one of four items mentioned in the Doha agreement has been practised by the Taliban and that is the start of the talks,” said Afghan republic negotiator Fawzia Koofi.

The republic negotiators returned to Kabul in December and went back to Qatar three weeks later to begin the second round of the negotiations.

“Overall, the actions demonstrated by the Taliban so far have created doubts around their will for peace,” said Afghan republic negotiator Mohammad Amin Ahmadi.

The second round of talks began early in January but relations were cool as there were reports about the intention by the new U.S. administration to review the Doha deal. This led to 36-day pause in the meetings of the working groups of both sides who were expected to finalise the agenda of the negotiations.

But the Taliban, in a statement on the first anniversary of the deal, criticised U.S. forces for continuation of the airstrikes. Referring to the review of the deal, the Taliban has said that the peace agreement—signed in Doha—is the practical way towards peace and stability in Afghanistan and that seeking any alternative for the deal will be a failed attempt and will end in failure of the peace efforts.

Taliban deputy leader Mullah Abdul Ghani Baradar, in a voice message on the first anniversary of the deal, called it the main tool to bring peace and stability and an Islamic system to the country.

“The process should move forward based on the Doha deal and the Afghanistan issue should be solved through a political settlement,” said Abdul Salam Zaeef, Taliban ambassador to Islamabad during their regime in Kabul.

The negotiating teams in Doha have held four meetings over the last week but these discussions have not had any progress. Sources familiar with the process said that progress and speed in the talks are dependent on the announcement of the results of the U.S. review of the Doha agreement.