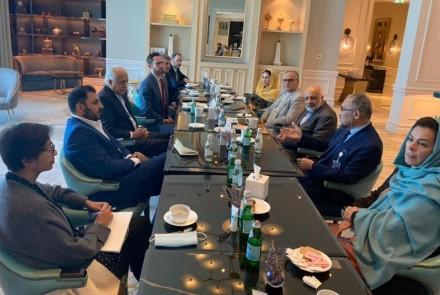 Representatives from the UN, Turkey, Qatar and the U.S. have met the peace negotiating team of the Islamic Republic of Afghanistan in Doha and discussions were held about the agenda of the upcoming conference on Afghan peace in Istanbul.

A member of the peace negotiating team representing the Islamic Republic of Afghanistan in the talks with the Taliban said that the meeting was aimed to gather views on the agenda of the upcoming meeting in Turkey.

Meanwhile, sources close to the Taliban have said that the U.S. continues to push for a three-month extension of the May 1 deadline for American forces to leave Afghanistan.

“Representatives from the US, Turkey, Qatar and the UN are in Doha—they have started their discussions with both sides of the negotiations on the modality and agenda of the talks in Turkey,” said Ghulam Farooq Majroh, a member of the republic’s negotiating team.

Earlier this week, the U.S. special envoy for Afghanistan’s reconciliation, Zalmay Khalilzad, met senior Taliban leaders including Mullah Baradar, the head of the Taliban’s political office in Doha, to discuss provisions of the U.S.-Taliban peace agreement, including the withdrawal of U.S. forces from Afghanistan.

“Now that the U.S. is willing to stay here, this is something that is supported by those who want to create barriers in the way of peace,” said Abdul Salam Zaeef, former Taliban ambassador to Islamabad.

While U.S. Secretary of State Antony Blinken recently said that the Turkey conference will be held in the new few weeks, the High Council of National Reconciliation (HCNR) has expressed concerns over the existence of multiple plans which are expected to be discussed at the conference.

“Various factions in Afghanistan have expressed their views and perspectives about the plans, a commission under the leadership of Mr (Younus) Qanooni is working to unify these plans, we hope to attend the Turkey conference with a unified stance,” said Mujiburrahman Rahimi, media adviser to the HCNR.

Afghan politicians believe that the Turkey conference can provide a good platform for accelerating the peace process. They say that failure in Turkey will lead to failure in Doha. “We hope that this conference will help us form a solution so that the two warring factions are able to move with their discussions in a more serious way and we get to a settlement,” said Zabihullah Mojadadei, the head of Jabha-e-Milli Nejat party.

One of the key agendas of the talks in the Turkey conference will be the U.S.-proposed peace plan. But sources have said that the Taliban’s leadership is still holding discussions on it.