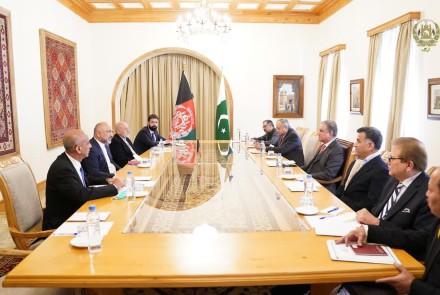 KABUL: Pakistan’s Prime Minister Imran Khan on Thursday arrived on a day-long visit to Afghanistan where he met top Afghan government officials including President Ashraf Ghani and the talks between the two were focused on a number of important issues pertaining to the Afghan peace process, bilateral relations and cooperation between the nations on mutual interest.

The Afghan Ministry of Foreign Affairs issued a statement on Thursday evening, saying the two countries have agreed on a shared vision to support peace and stability in both countries and the wider region.

“During the visit, an agreement was reached on Shared Vision to Support Peace and Stability in both countries and in the wider region. The document is highly important and the basic principles of the document are about cooperation between the two countries, cooperation in the field of peace, security and economic development,” the statement said.

The document states that both parties welcomed the start of the Afghan peace process in Doha on 12 September 2020 and hoped that the talks will bring lasting peace and tranquility to the Islamic Republic of Afghanistan.

“They affirm their intention that both countries should look towards a future relationship built on trust, aiming to achieve tangible outcomes from that relationship. They note that closer and fraternal relations between the Islamic Republic of Afghanistan and the Islamic Republic of Pakistan would be beneficial, desirable and achievable, as indeed they had been in the decades before the latest conflict in Afghanistan,” the document says.

• Afghanistan and Pakistan should enjoy a special relationship, founded on predictability, transparency, mutual and full respect for one another’s sovereignty, and on expanding and furthering their mutual interests through State-to-State mechanisms.

• Afghanistan’s posture of “multi alignment” with other countries, pursuing a number of friendly relationships, presents a real opportunity for the two countries to exploit and conversely presents no threat.

• Neither country’s territory should be used for malicious purposes against the other’s territory, and that both countries should work together to identify and tackle enemies of peace, irreconcilables and those who undermine the peace process.

• The two countries should further their links and connections in a number of different ways, including through people to people contacts, business to business, government to government and, of particular note, security to security ties.

• Regional connectivity should be broadened and deepened, with an emphasis on trade, free movement of people, goods and services, opening of trade and customs posts, and transport and energy infrastructure development, aiming for regional development dividends greater than what each country might expect to achieve alone.

• Expeditious resolution of the refugee situation, i.e. the safe, time-bound and dignified return of refugees, would help the two countries address the humanitarian and socio-economic challenges associated with population displacement. Refugee returns would require resourcing, including donor support from the widest and the most inclusive possible donor community.

• The representatives of Afghanistan and Pakistan agree that timely progress to meet this vision would require close coordination, a structured dialogue, and willingness to take difficult and courageous decisions.

• By 15 December 2020: Re-energizing joint intelligence services-led work on analyzing, mapping and cooperating against enemies of peace and those undermining the peace process.

• By 1st January 2021: A joint proposal for refugees return, elevating and intensifying treatment of this issue, to the point where credible and progressive action can start to be taken.

• By 1st January 2021: A joint proposal to further regional connectivity, in a way which strengthens both Afghanistan and Pakistan, but also the wider region.

Afghanistan and Pakistan also agreed on next steps in their relations and mutual matters. They agreed that:

• The government leaders of the two countries will visit each other’s capital alternately to keep the momentum going.

• President Ghani would plan a reciprocal visit to Islamabad in the first quarter of 2021.

• Afghanistan will share with Pakistan summary of the key issues that are being discussed during the Afghanistan Peace Process.

According to the Foreign Affairs Ministry, both sides agreed to keep this shared vision, its commitments, and previous commitments under regular review to ensure measurable, clear and irreversible steps towards furthering closer and more productive relations between their two countries.