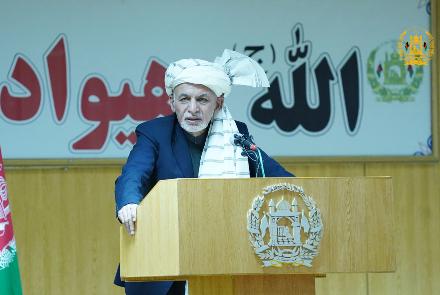 KABUL: President Ashraf Ghani has invited the Taliban to Kandahar for discussions on bringing peace to Afghanistan. In a trip to the southern province on Thursday, Ghani said if the Taliban are willing to bring peace, they can come to Kandahar to hold talks with the delegation of the Islamic Republic of Afghanistan.

Ghani said the Afghan people will not allow a further release of Taliban prisoners, as the group has not reduced violence.

Referring to the recent attacks by the Taliban in various parts of Kandahar, Ghani pledged that the Afghan security forces will restore security for the people in the province. “(The Taliban) say that their agreement with the US is better than the Sharia (Islamic) law,” said Ghani. Presumably referring to the demands of the republic’s negotiation team, Ghani said: “If (the Taliban) do not accept, they can come and hold talks in the shrine of Mirwais Neka and Ahmad Shah Baba (Ahmad Shah Abdali).”

Ghani said that last year the Taliban destroyed 16 per cent of the nation’s wealth in the war, stating that the Taliban’s call for the release of more prisoners at this stage is not acceptable. “Now that they (Taliban) ask for the release of another 2,000 (prisoners), will you (people) allow their release? No! We saw that the bloodshed did not stop. They must stop the bloodshed so we can talk,” said Ghani.

First Vice President Amrullah Saleh said “the commitments that were made by the Taliban about peace and about kicking out 19 or 20 terrorist groups from our soil—not one of those commitments has been implemented”. Foreign forces in Afghanistan are pursuing their own interests, which correspond to Afghanistan’s, he added. “They are staying here in pursuit of their own interests, our interests and their interests are shared against terrorism.”

Meanwhile, Gen. Mark Milley, chairman of the US Joint Chiefs of Staff, held unannounced talks with Taliban peace negotiators in Doha, capital of Qatar, to urge a reduction in violence across Afghanistan, AP reported. Gen. Milley met for about two hours with the Taliban negotiators on Tuesday and on Wednesday flew to Kabul to discuss the peace process with President Ghani, the report said.

“The most important part of the discussions that I had with both the Taliban and the government of Afghanistan was the need for an immediate reduction in violence,” Gen. Milley told three reporters, including one from the AP, who accompanied him to Qatar and Afghanistan. “Everything else hinges on that.”

Following ground rules set by Gen. Milley for security reasons, the journalists traveling with him agreed not to report on either set of talks until he had departed the region, according to the report.

In Kabul, President Ghani met Gen. Milley on Wednesday evening, the Presidential Palace said, adding: “Both sides expressed their concerns over the escalation of violence in Afghanistan and discussed the Afghan peace process and the immediate need for a ceasefire.”