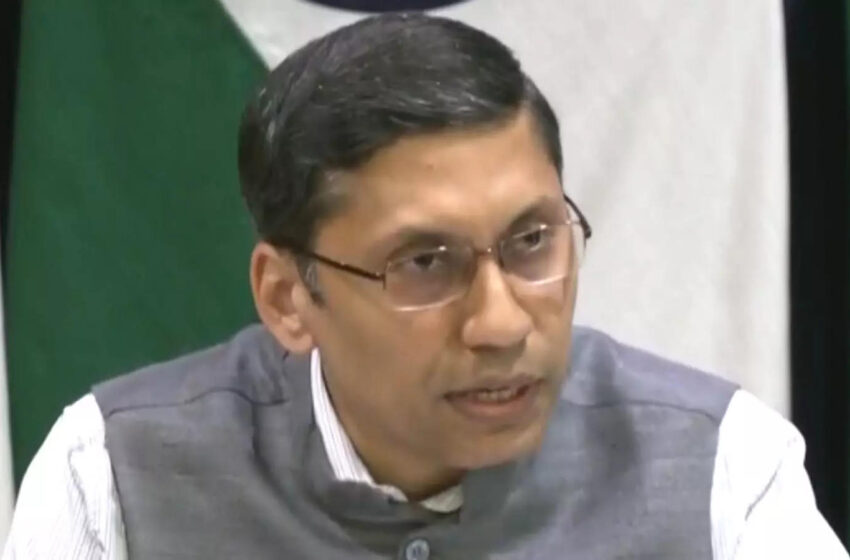 NEW DELHI: India’s foreign ministry came out with all guns firing on China, beginning with the first comment on Taiwan. Ministry spokesman Arindam Bagchi said at a briefing on Friday, “Like many other countries, India too is concerned at recent developments. We urge the exercise of restraint, avoidance of unilateral actions to change the status quo, de-escalation of tensions and efforts to maintain peace and stability in the region.”

But this was only the teaser. The real issue for Delhi was China blocking an India and US backed move at the UN to designate Abdul Rauf Azhar, deputy chief of the Jaish-e-Mohammed (JeM) as a “global terrorist.” He is accused of planning and executing several terror attacks including the hijacking of the Indian Airlines flight IC-814 in 1999, the Parliament attack in 2001 and the attack on an Indian Air Base in 2016 which saw the death of six Indian soldiers.

It was regrettable, Bagchi said, that “genuine and evidence-based listing proposals pertaining to some of the most notorious terrorists in the world were being placed on hold,” adding that “it was unfortunate that the international community has been unable to speak in one common voice on our collective battle against terrorism.”

He pointed out that Azhar “Has been proscribed under Indian and US laws already, and therefore the placing of the “technical hold” against such a wanted terrorist is most uncalled for. India will continue pursuing its principled position of bringing these terrorists to justice, including through the UNSC 1267 Sanctions Regime.”

Urging the international community to put aside their differences, Bagchi underscored that the “continued practice of placing holds and blocks on terrorists without giving any justification needs to end,” and the “ongoing double standards and continuing politicisation have rendered the credibility of the Sanctions Regime at an all-time low.”

There was more, this time with reference to China’s comments on India’s role in Sri Lanka and the controversy over the satellite tracking ship Yuan Wang 5. “We reject the insinuations in the statement about India,” Bagchi said bluntly, “Sri Lanka is a sovereign country and makes its own independent decisions. With regard to our security concerns, this is the sovereign right of every country. We will make the best judgment in our own interest. This naturally takes into account the prevailing situation in our region especially in the border areas.”

Bagchi also had the last word to a loaded question by a Xinhua reporter on the ‘One China’ policy and India’s refusal to reiterate it since 2005. “India’s relevant policies are well known and consistent. They do not require reiteration.”