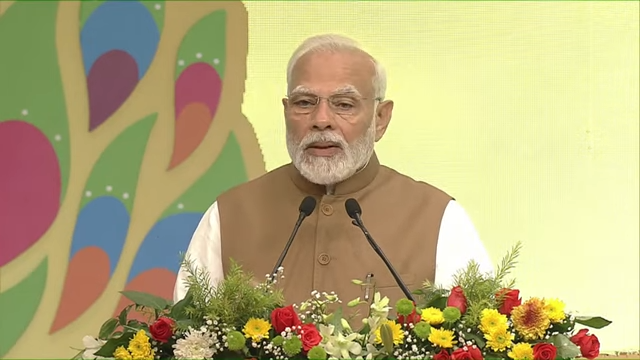 NEW DELHI: “Certain countries support terrorists as part of their foreign policy. They offer political, ideological and financial support to them.” With a jibe at Pakistan, Prime Minister Narendra Modi called for a broader zero tolerance to terrorism at the inaugural session of the third ‘No Money for Terror’ (NMFT) ministerial conference here.

“There must be a cost imposed upon countries that support terrorism and organisations and individuals that try to create sympathy for terrorists must also be isolated. There can be no ifs and buts entertained in such matters. The world needs to unite against all kinds of overt and covert backing of terror,” PM Modi told the gathering that has delegates from over 70 countries along with multilateral organisations such as Interpol, FATF and Europol.

The two-day conference will focus on choking funds to terrorists and will deliberate on which nations can collectively tackle the growing use of technology in terror funding through cryptocurrencies, online payment systems and crowdfunding platforms.

The Prime Minister’s remarks come against the backdrop of the FATF removing Pakistan from its ‘Grey List’ last month, which means the country will no longer be under increased monitoring from the agency. India had struck a note of caution, saying “It is in global interest that the world remains clear that Pakistan must continue to take credible, verifiable, irreversible, and sustained action against terrorism and terrorist financing emanating from territories under its control.”

Prime Minister Modi drove home the point by saying global reaction to terrorism cannot be selective. “The intensity of the reaction to different attacks cannot vary based on where it happens. All terrorist attacks deserve equal outrage and action. Further, sometimes, there are indirect arguments made in support of terrorism to block action against terrorists. There is no place for an ambiguous approach while dealing with a global threat.”

Over the last few months, a number of conferences have been held in India, relating to different dimensions of security, the most prominent being the General Assembly of the Interpol in New Delhi and a special session of the United Nations Security Council’s Counter-Terrorism Committee in Mumbai. On the outcomes of the current conference, officials confirmed that previous editions of the conference in France and Australia had seen a chair statement and some resolutions which could happen here. “Something is likely to come out of this, but it is still in the making,” Dinkar Gupta, DG, NIA told reporters.

The conference, though its ambit is similar to the FATF, it is a much bigger forum with a wider remit. Officials say the NMFT’s process is at the ministerial level while the FATF is non-ministerial and membership based. Also, the NMFT is solely focussed on terrorism and terror financing while the FATF’s ambit is much wider.

It is with this in mind that India can push its key concern of the growing threat of cyber terrorism and cyber financing. As the PM said the answer was not to “demonise technology” but to understand and cooperate against threats from the virtual world. “New kinds of technology are being used for terror financing and recruitment. Challenges from the dark net, private currencies and more are emerging. There is a need for a uniform understanding of new finance technologies. It is also important to involve the private sector in these efforts. From a uniform understanding, a unified system of checks, balances and regulations can emerge.”