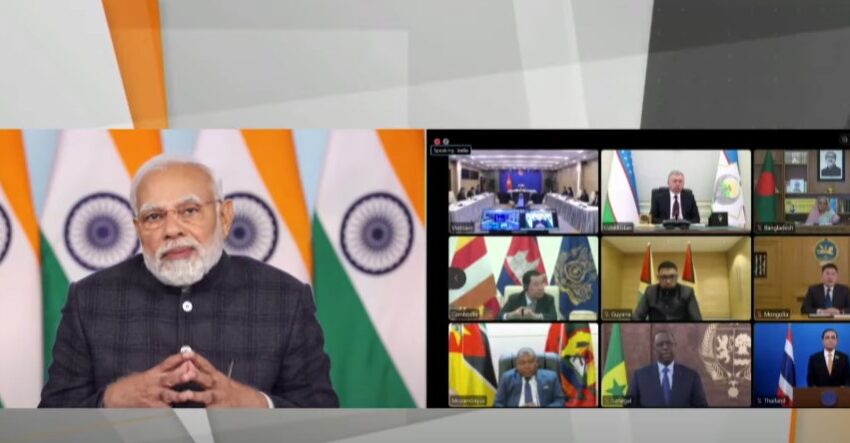 NEW DELHI: It took about four weeks to organise the virtual Voice of the Global South Summit and despite Christmas and the New Year holidays, leaders from 125 nations including heads of state and foreign ministers, took part.

That does say something about India’s powers of persuasion and while the tendency would be to credit Prime Minister Modi, the idea probably has its
roots in some file in the bowels of the Ministry of External Affairs, where it germinated and ripened leading to this day.

The idea could be seen by some as a throwback to those days when India held forth on the world from the NAM pulpit. But NAM has faded, leaving the developing world (or Global South) with no voice. Take for instance the Ukraine war and the resultant crisis in food, fuel and fertilizer, the sense is the voice of the “Global North” is loud and resonant even though the burden is being borne by the south with little relief in sight.

So, the timing may have been just right for India: a war in Europe that is economically debilitating the Global South leading to political instability. India as G20 President can take some of their concerns to the high table where there is at least the promise of being heard.

The fact that India has been hit hard by the Ukraine war would have lent credibility to its effort. That and its adroit diplomatic manoeuvring to evade sanctions while continuing to import discounted Russian oil, may have even
warmed southern cockles.

There’s no doubt this summit was a huge platform for India. It has buttressed India’s reputation as the voice of the developing world and amplified the message. But there’s another point here.

Indian diplomats who have served in multilateral institutions and agencies, say developing countries want to see the draft of India’s intervention on key matters before finalising their position.

As one of them underscored: “They don’t go to China, they go to India since we are like them with similar problems. Priorities are not different.“

Incidentally China wasn’t invited for the south summit (and some other countries like Pakistan). For that matter no G20 member or G7 member was
invited. This was deliberate to ensure “no rich man’s games that could undermine the outreach to the south”.

It was also the reason why the summit plan was kept confidential until a few days before it kicked off.

Indian diplomats would deny any plans to shape the south summit into an alternative grouping. Rather, the Voice of the Global South Summit was an attempt at “humble outreach”, to listen and learn, “collect the dots and then help connect them”. In that sense, it was an experiment and while the
response has been encouraging, it’s not clear if regular summits of this kind would serve any purpose. But that is in the future.