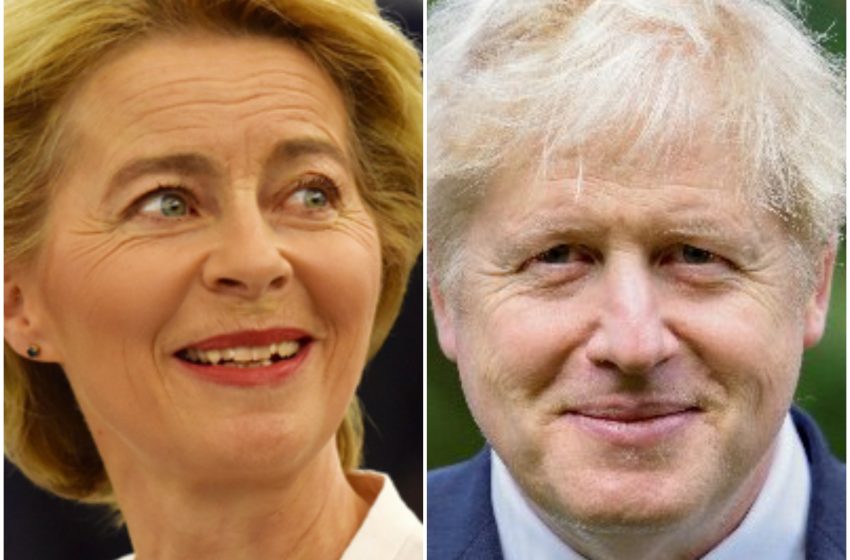 NEW DELHI: Breakups are always painful and if you add a global pandemic into the mix you have a recipe for disaster. This terse but cogent statement seems to adequately sum up the EU-UK relationship at the moment.

The most recent blow comes as the UK announced that it has sealed a deal with US-based pharmaceutical company Novartis. Tweeting late last night Prime Minister Boris Johnson stated. “Vaccine has proved effective in UK trials. Our medical regulator will now assess the vaccine, which will be made in Teesside. If approved, we have 60m doses on order.”

Johnson’s statement will be seen by pro-Brexit commentators as another reason why the UK is better off without Brussels “red tape.” The 27-member bloc who have been in talks with Novartis to provide 200 million doses in December has still to finalise a deal with the US-based pharmaceutical giant.

But that’s a storm in a teacup compared to the fallout over AstraZeneca which shows no sign of ending soon. The EU claims AstraZeneca is contractually obliged to provide them with 300 million doses while the UK claims they have first right leading to much anger. The result: the EU has threatened to block Covid-19 vaccines by Pfizer if they do not get the promised doses. This has prompted cries by the UK of “vaccine nationalism.”

Reacting British Health Secretary Matt Hancock said at a news conference, “I am sure that we can work with the EU to ensure that whilst transparency is welcome, there are no blockers put in place. Having spoken to the chief executives both of Pfizer and AstraZeneca, I am confident the supply of vaccine into the UK won’t be disrupted.”

For the UK where a new mutant variant of the Covid-19 virus has broken out many commentators claim they cannot afford to wait for the Brussels “red tape.” According to a study conducted by the John Hopkins university (figures accurate up to January 27) Covid-19 death rates in the UK are the fifth highest in the world, behind US, Brazil, India and Mexico, at 100,162 and much above its fellow European countries.

This has resulted in drastic measures with nations-states tightening their borders against UK nationals and Britain too introducing a Covid ban travel list of nations allowed to enter Britain, the latest being the UAE, Burundi and Rwanda. The reason: the UK fears its nationals catching and bringing home the South African mutant variant of the virus.

British Transport Secretary Grant Shapps confirmed the move on Twitter. “From tomorrow (Friday 29 Jan at 1pm), we’re extending our travel ban with the United Arab Emirates, Burundi and Rwanda all added to the UK’s red list. This means people who have been in or transited through these countries will be denied entry, except British, Irish and third country nationals with residence rights who must self-isolate for ten days at HOME.”

On its official website Etihad announced, “From 1pm (GMT) on 29 January, all flights to the UK will be suspended. If your plans have been affected, we’ll keep your ticket open for you to book whenever you’re ready. You don’t have to contact us straight away to change your flight.

Emirates confirmed the same. “As directed by the UK government, Emirates will be suspending passenger services between Dubai and all our UK points – Birmingham, Glasgow, London, Manchester, effective 1300hrs GMT on 29 January 2021 until further notice.”

This is a huge blow to the aviation industry and to the UK. The Dubai-London flight is among the busiest and most lucrative for the UK. But the UK’s problems do not end there. Prime Minister Boris Johnson has recently made what was seen an “emergency visit” to Scotland and more specifically a Scottish laboratory where the Covid-19 mutant vaccines are being rolled out.

“In Scotland I met the brilliant healthcare workers, scientists and military personnel co-ordinating the pandemic response. The UK Government is working hard to support all parts of the UK in delivering vaccines and tests at an unprecedented rate,” the Prime Minister tweeted.

Normally such a visit should have passed unremarked. But Covid-19 has changed things drastically. Scotland’s First Minister Nicola Sturgeon has stated publicly that there was no need for the prime minister to come.

But politically there was every need for Boris to go. Sturgeon who leads the Scottish National Party (SNP) wants out. Sturgeon is reportedly fed up, by the way Johnson has handled the pandemic. Scotland’s Covid-19 cases are the lowest in contrast to the rest of the UK. Scottish elections are in May and her party have pushed an 11-point manifesto why Scotland should leave the UK and why a referendum should be offered to the Scottish people. Most of all though Sturgeon is unhappy with the Prime Minister’s deal and sees Scotland’s future with the EU.

“Scotland will be back soon, Europe. Keep the light on,” Sturgeon said a month ago. She’s also claimed consistently that Scots have voted against Brexit.

The British prime minister has an unenviable task. Placating an angry Europe, managing the mutant Covid-19 virus at home and the economy, handling Scottish sentiment who want their Brexit from the UK, there is more than enough to handle.

Add the fact that Britain is playing host to two major summits – the G7 in June and COP26 in December – the UK has to shine in both to impress President Joe Biden and other leaders like Prime Minister Narendra Modi after the highly publicised visit by Dominic Raab to India where moves towards a free trade pact was announced. Boris has promised a “Global Britain.” Now he must deliver on it while mending the cracks at home.