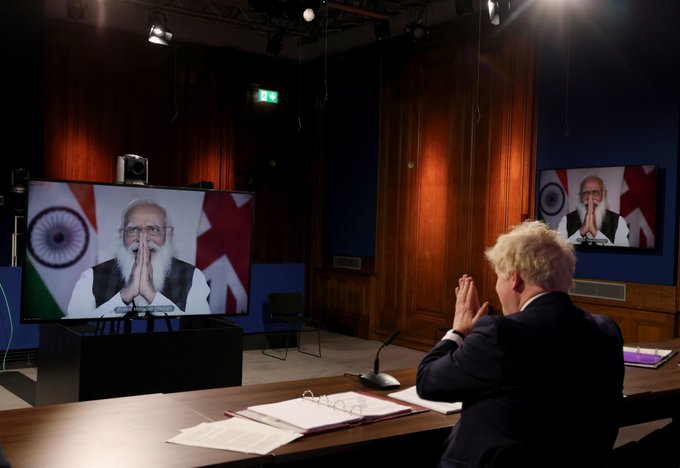 Deeper economic co-operation between India and the UK was already on the agenda before Prime Minister Narendra Modi and his British counterpart Prime Minister Boris Johnson held their virtual summit but the takeaways were still impressive. The first step was the adoption of ‘Roadmap 2030’ which will provide a framework for UK-India relations across health, climate, trade, education, science and technology, and defence.

Economy was the key issue as the two prime ministers finalised over 1 billion pounds of total trade investment which comes under the mandate of an ‘Enhanced Trade Partnership’ (ETP). The ETP is significant, as not only will it look at opening critical sectors of each nation’s economies but should also move India and the UK towards an FTA by next year. Officials say that also on the agenda is a commitment to double bilateral trade currently valued at 23 billion pounds by 2030.

“Like every aspect of the UK-India relationship, the economic links between our countries make our people stronger and safer…In the decade ahead, with the help of [the] new Partnership signed today and a comprehensive Free Trade Agreement, we will double the value of our trading partnership with India and take the relationship between our two countries to new highs.” Johnson said in a statement.

Other commitments included closer health co-operation in tackling the global pandemic by strengthening supply chains and working closely together to ensure that the goals of the Paris Agreement would be agreed to and implemented at COP-26 being hosted by the UK later this year. One of the more interesting takeaways for India though was the signing of an MOU called the ‘India-UK Global Innovation Partnership.’

An MEA release stated the partnership, which is co-financed by both India and the UK, will see “the transfer of inclusive, climate smart innovations from India to selected developing countries.” It said that this will “extend support in the form of grants, investment capital and technical assistance to Indian innovators/enterprises to help them take their innovations to third countries.” Some of the key nations being considered are in Africa and the Indian Ocean

On the defence front, the two leaders reiterated their commitment to a “free” and “open” Indo-Pacific and agreed to enhanced defence and maritime co-operation. This included cooperation on Maritime Domain Awareness which included new agreements on maritime information sharing and an invitation by India to the UK to join India’s Information Fusion Centre in Gurgaon.

These announcements come with the news that the UK’s Carrier Strike Group 2021, led by HMS Queen Elizabeth, will sail to India in the autumn on its maiden operational deployment. Officials say that joint exercises are on the anvil with possible trilateral exercises with other nations to follow.

Defence aside, India and the UK signed the ‘Migration and Mobility Partnership’ which will make it easier for young professionals to live and work in each other’s countries. The MOU was signed by External Affairs Minister S Jaishankar and Home Secretary Priti Patel. What it means is 3,000 young Indian professionals can avail of employment opportunities in the UK for a period of two years without being subject to labour market tests. The facility which is already available to Australian, Canadian, Japanese and South Korean citizens has been offered to India for the first time.