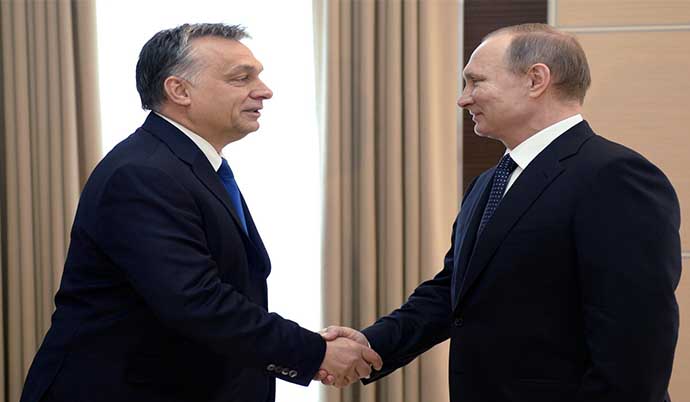 NEW DELHI: Russia’s President Vladimir Putin has reason to be happy with the re-election of Hungary’s Prime Minister Viktor Orban and Serbia’s President Aleksandar Vucic. Both far-right leaders are said to be close to the Kremlin and Orban in any case has never troubled to hide his preferences.

As he remarked during victory celebrations, “we have had to fight overwhelming forces: the left at home, the international left all around, the Brussels bureaucrats…the international mainstream media and in the end even the Ukrainian president.”

Orban’s strident anti-Brussels line is however tempered with caution. Hungary is reliant on EU funding and European Commission president Ursula von der Leyen has announced that the 27-nation bloc will look to suspend these support payments to Hungary under what is called the “rule of law conditionality.” Ratified by the European Parliament in December 2020, the EC can combat “violations of the rule of law” through the “suspension of payments which are charged to the EU budget.” If Hungary is found in breach of these rules, it could possibly be the first EU country to receive a slash in funding under this new mechanism.

Bhaswati Sarkar, Professor at the Centre for European Studies at JNU however believes that “this process requires building up a consensus, something that will not happen overnight. It also sets a precedent against a democratically elected government, something that will make most EU nations uncomfortable. Also, Hungary as an EU and Nato member can retaliate by stalling EU decisions that require unanimity especially in the areas of climate change, energy, and foreign policy.”

Having said this Orban has this time considered his options more carefully. Unlike 2014, when he wholeheartedly supported Russia after its annexation of Crimea, he is now a little more circumspect by supporting EU sanctions against Moscow with the exceptions of oil and gas. This is something that other EU nations like Germany cannot fault him on as they themselves have stated that they need Russian energy. This leaves Orban with enough wriggle room to make his case that his country cannot be a conduit for arms to Ukraine.

“Orban does not feel that it is in the national interest of Hungary to get involved in the war, as he doesn’t feel Ukraine is an existential threat for Hungary,” says Sarkar who adds that the situation is vastly different for Poland given their history. “Poland has its own historical memory. It was wiped out of the world map in 1795 and did not emerge as the Polish Republic till 1918. It is doing all it can to ensure that this does not happen again.”

The divergence in Hungary and Poland’s views on Ukraine has soured their fraternal relationship. Other East European nations are unhappy too. The tensions could be seen when Hungary had to postpone the Visegrad 4 (V4-Poland, Hungary, Slovakia and the Czech Republic) meeting scheduled for March 30-31. Czech defence minister Jana Černochová made it clear their differences were over Ukraine.

“I have always supported the V4 and I am very sorry that cheap Russian oil is now more important to Hungarian politicians than Ukrainian blood,” Černochová wrote on her Twitter account.

The squabbling between the East European nations contradicts the Western media narrative that there is a pro-Putin coalition building up within Europe. The fact is their interests are too diverse. While Serbia’s President Vucic flaunts his friendship with Putin and the dependence on Russian gas, Serbia is also keen on entering the EU (unlike Hungary which is already a member).

“That is why our position is so difficult: Serbia has embarked on the European path, Serbia has always supported Ukraine’s integrity, but on the other hand, some eighty-five percent of people will always side with Russia whatever may happen. These are the facts I am faced with as the country’s president,” Vucic said in a recent TV interview.

While this lack of cohesion amongst the newly elected pro-Putin leaders may not prove to be a serious threat – Hungary alone cannot influence major changes in the EU’s policy – it prevents Europe from presenting a united front against Russia. That will not just be an irritant to the rest of Europe but also to President Biden who has made Ukraine a priority issue in the run-up to his mid-term elections.