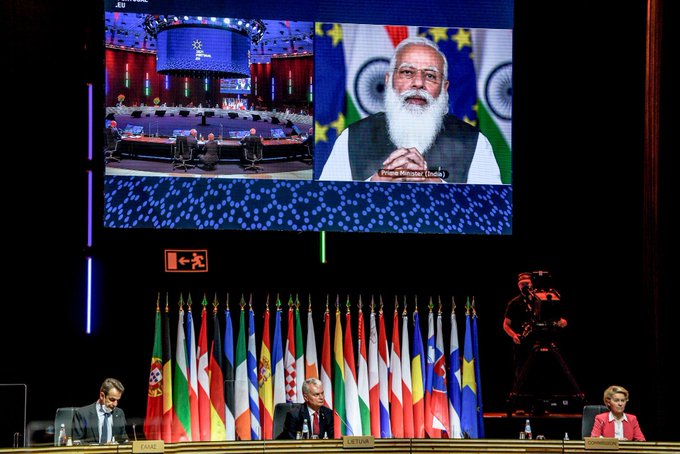 NEW DELHI: As summits go, Narendra Modi’s virtual hook-up with 27 leaders of the European Union over the weekend appeared to tick all the right boxes. This is only the second time that the EU has “summitted” with one country (the other being the US). Also, the summit included the 17 Central and East European countries that joined up with China nine years ago hoping to benefit economically but now increasingly disillusioned. That is seen as another positive for India.

An impressive joint statement underscored the similarity of views on a range of issues including the Indo-Pacific, the pandemic, 5G (keeping the Chinese out) and so on. But former Indian diplomat Anil Wadhwa with considerable experience of Europe, found the joint statement “rather diffused” given that everything that could be mentioned was there in the document. Wadhwa was particularly concerned about the absence of any mention of a timeline, whether on negotiations for a free trade area or on the issue of connectivity.

“Perhaps the pandemic with all its uncertainties is the reason,” he said “but a timeline would have been an indication that the two sides intended to get down to business.”

A high-level source StratNews Global spoke to argued that documents of this kind tend to be wordy, “because that is also the nature of the summit with 27 EU countries with each of them having a say.” While timelines are important, both sides may have found it suited them to mention the areas they intended to cooperate and leave the matter of dates to be sorted out at official levels. This after all was a summit of heads of government where the focus would be on outlining a vision and laying out the broad framework.

But trade experts warn that India suffers from a serious image problem when it comes to international trade and investment. There was the surprise decision to scrap a staggering 57 investment agreements in 2016 and re-negotiate new ones. Then the government’s top ministers have made no secret of their dislike for free trade agreements signed with a number of countries. The agreements are seen as giving no benefit to India while ensuring its market remained open to every other country.

Ambassador Wadhwa believes the “benefits of the FTAs were never disseminated properly to trade and business in the country, so we lost out.”

On the positive side, India continues to observe the FTAs and investment agreements while working on new draft agreements. On the flip side, India walked out of the Regional Comprehensive Economic Partnership last year saying that its concerns regarding China were never addressed. While nonetheless true, it may have scared away investment seeking to diversify away from China.

Although the EU has said it is not interested in an “interim FTA” of the kind India is negotiating with the US, it can be expected to watch how the two countries go about it and with what result. At the end of the day, it’s about business, and while the EU-India trade volume at $90 billion may not be substantial from Brussel’s point of view, the potential for growth cannot be denied.

The focus on connectivity is not only about roads and railways, it’s also about maritime and that brings in the Indo-Pacific where the EU has shown support for India (vis a vis China). Both sides will also look at funding joint projects in Africa, Central Asia apart from of course the Indo-Pacific.

A word on cooperation to fight the pandemic. India and the world is witness to the scale of support from Europe as this country battles a virulent second wave of the coronavirus. This does not mean the EU will back the waiver of IPR for vaccines given the massive pharma presence on the continent. But the EU is not without a conscience, which is why the WTO meeting on the issue at the end of May must be closely monitored.