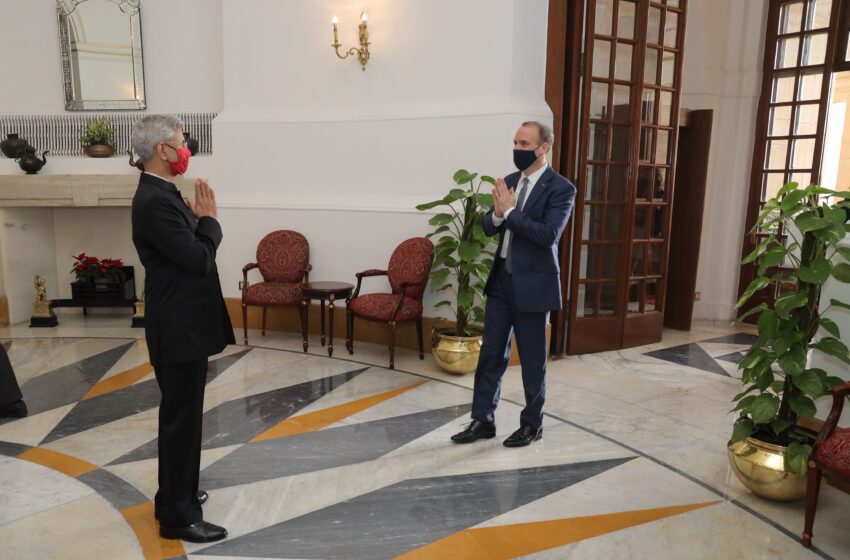 NEW DELHI: Given that Prime Minister Boris Johnson is scheduled to visit India as Chief Guest for Republic Day next year it was no surprise to see Dominic Raab come bearing gifts. The British Foreign Secretary who held an over four-hour-long dialogue with External Affairs Minister S Jaishankar at Hyderabad House on Tuesday unveiled a range of goodies that would certainly appeal to the Indian palate. The two sides agreed upon a 10-year roadmap which included an ‘enhanced trade partnership’ that could lead to a future FTA.

‘Bilateral trade between India and Britain was growing at 11% before the Covid-19 pandemic and investments by the two sides supported more than 500,000 jobs in both countries. The two sides will work towards an ‘enhanced trade partnership’ next year with the hope that it will be a ‘stepping-stone towards a free trade agreement,’ Raab said at a joint press conference with the Indian EAM.

The FTA appetiser aside, the main delicacy for New Delhi was the invitation issued by Prime Minister Boris Johnson to Prime Minister Narendra Modi to be part of the G7 summit to be held in the UK next year. Britain which holds the presidency has invited India, South Korea and Australia to be part of the G7+3 or its proposed name ‘D10’ – a coalition of ten democracies. On the UK’s side, India’s invite to Johnson to be the chief guest comes as a lifesaver for the British PM who is under increasing pressure at home. Johnson has been buffeted by sinking approval ratings at home with one survey ranking him at 2.9 percent as opposed to Chancellor Rishi Sunak who has 84 percent.

Responding to the Indian invitation, Johnson said in an official release issued by the British government, ‘I am absolutely delighted to be visiting India next year at the start of an exciting year for Global Britain and look forward to delivering the quantum leap in our bilateral relationship that Prime Minister Modi and I have pledged to achieve.’

The four-hour talks focussed on five key areas – trade and prosperity, defence and security, climate change, healthcare and people-to-people connectivity. In terms of key global issues, the two sides also reviewed the situation in Afghanistan, the evolution of the Indo-Pacific and developments in the Middle East besides discussion on shared concerns over challenges posed by terrorism and radicalism. Bur what has caught New Delhi’s fancy the most is the key interest that the UK now seems to be paying to the IOR and the fact that it now seems to want India along as a key partner.

‘As a key player in the Indo-Pacific region, India is an increasingly indispensable partner for the United Kingdom as we work to boost jobs and growth, confront shared threats to our security and protect our planet,’ Johnson said.

Underlining the British Prime Minister’s words Jaishankar said, ‘India and Britain have a shared commitment to a multipolar world – we can and we should make a difference to the rules based global order.’  Asked whether he thought that the world was now increasingly sharing India’s vision of the IOR, Jaishankar replied. ‘It is a matter of satisfaction that there is today a growing recognition and acceptance of the idea of Indo-Pacific. We have seen this with the UK, Germany. Netherlands, France, EU, Japan, ASEAN, Australia and the US and I dare say that there will be more. The Indo-Pacific is a reality.’

Raab is scheduled to meet Prime Minister Narendra Modi on Wednesday. Closer collaboration on trade partnership and working together to end COVID-19 and tackle climate change are expected to be the items on the agenda.