NEW DELHI: The leaders of 27 EU member states were in fighting mode as they held a rare video-conference on Tuesday to carve out a joint response to the crisis. According to latest figures, the virus now numbers 15,000 cases in the continent along with an estimated 536 deaths. This figure is likely to change very quickly as member nations update figures.

While promising to do “whatever it takes” to end the virus, a sense of panic appears to have set in with major events including a high level one on trade being cancelled. However, the European Union heads of state summit scheduled for March 26-27 is still on with the leaders expected to review progress in tackling the coronavirus.

The video-conference saw other issues raised, such as the free movement of EU nationals between member states and a common approach to sharing medicines and medical equipment. Germany and France among others have been criticised for blocking exports of medical supplies to smaller nations including Italy – currently the European epicentre of the pandemic.

For UK-based former Indian diplomat Amitav Banerji, the crisis has created a sense of fear in the continent that has not been seen for some time. Banerji, who served in India’s Permanent Mission to the UN and was political director for the Commonwealth Secretariat in London, believes that some European countries truly feel that they are facing their “darkest hour.”

“The coronavirus crisis has hit Europe in a big way, arguably just as severely as the global economic crisis of just over a decade ago and the migrant crisis of more recent times,” he said adding that “this news about an entire country of 60 million people being put in quarantine in Italy is mind-boggling. The Italian Prime Minister has quoted Winston Churchill in referring to Italy’s “darkest hour.”

The number of confirmed cases in Europe’s other large economies — Germany, France and the UK — climbs by the day and “war footing” is an expression now being commonly heard.”

For Italy, widely seen as the epicentre of the coronavirus virus in Europe with a reported 9,000 cases and a death toll of 463 so far – the second behind China – normal life appears to have ground to a halt.  Night clubs have shut, football matches and sporting events are banned, schools and universities will remain closed until the first week of April and travel plans have been scrubbed.

Prime Minister Giuseppe Conte who signed off on these measures on Monday called on his people to start “giving up something for the community.” The result is something one has never seen before in a democratic country.

But while some Italians may chafe at the rules, others feel slighted over being seen as the “infected country.” Silvia Annavini, a wine and food consultant based in Rome, warns that her country’s lucrative and employment-generating tourism industry will be hit the hardest. Major luxury chains such as Gucci and Prada will be affected with serious Europe-wide implications for the fashion industry and luxury chains including small & medium enterprises.  This could spell a recession unless the spread of the coronavirus is curbed.

Italy’s predicament sums up the panic in Spain, France and Germany. In the case of Germany where two deaths have been no reported so far and over 1000 people quarantined, the largest travel and trade fair ITB was cancelled. Also, the high-profile Leipzig Book Fair.

France which has reported 30 deaths so far has limited public gatherings, sporting events may be played without fans and tourism attractions such as the Louvre and the Chateau de Versailles etc. will admit visitors on a restricted basis so crowds do not build.

Despite such measures, French President Emmanuel Macron believes that only Europe can defeat the virus with member nations acting together. “Faced with the Coronavirus, let us leave no room for speculation and instability. Europe will have to do all that is necessary in health and in economic terms,” he tweeted.

The biggest concern right now seems to be in the UK. Along with the infection of the UK’s junior health minister Nadine Dorries, the combination of Brexit and the rising cases of coronavirus has led to panic buying. Local media reported that Tesco, the largest grocer in the UK, has restricted the sale of essential food items.  The restrictions also cover antibacterial gels, pasta, tinned vegetables and UHT milk. High street chemists are restricting sales of hand-sanitisers to two per person.

With the UK Department of Health declaring that the “Wuhan coronavirus outbreak as a serious and imminent threat to Britain,” the economic impact could be severe, warns Banerji.  “Major meetings and sporting events have been cancelled. Airlines are struggling, with one British carrier (Flybe) going under. Supermarket shelves have emptied out of many products as people hoard for an uncertain near future and many companies have banned employees from travelling.”

“One does wonder whether this sense of panic is justified, given that far more people in the world commit suicide every day or die of heart attacks, cancer and diabetes,” he pointed out. “But it is quite clear that the impact of Covid-19 on Europe — and the world at large — will be severe and long-lasting.” 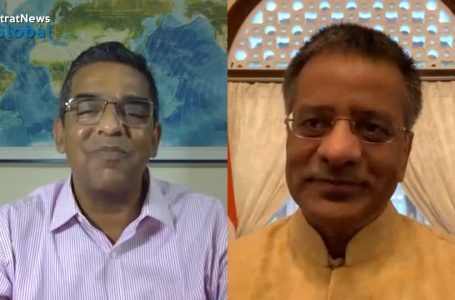