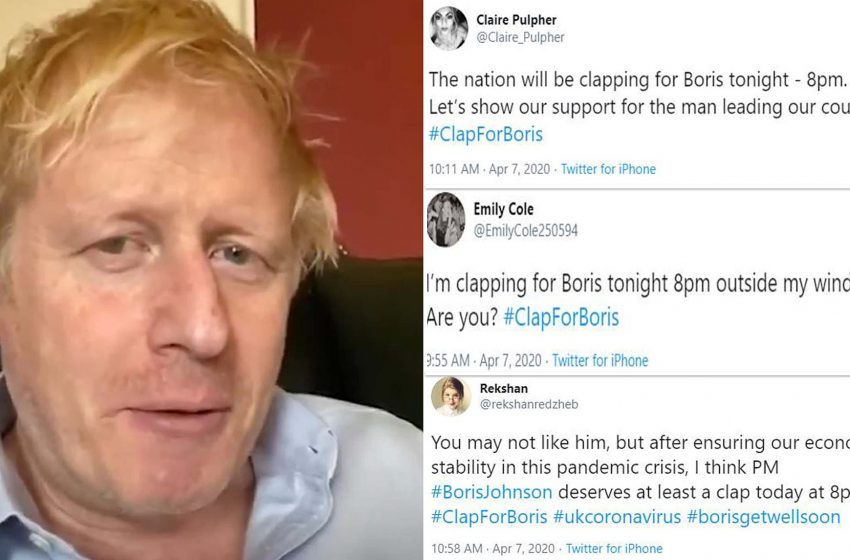 NEW DELHI: Global pandemics are truly democratic in nature. Witness British Prime Minister Boris Johnson being moved to the intensive care unit at St Thomas’s Hospital on Monday afternoon, diagnosed with the coronavirus. Secretary of State for Foreign Affairs Dominic Raab is in charge until the PM returns.

Latest reports suggest that the condition of the British PM is “stable” and he is said to be in “good spirits”, but what is shocking is the speed at which he was taken ill. On March 27, Johnson had tweeted a video of himself where he confirmed that he had developed “mild symptoms” of the virus and had been given “medical advice” to work from home.  He was admitted to the hospital on Sunday with what were described as “persistent symptoms” but very quickly his condition worsened and he was taken to the ICU on Monday. Downing Street says he has been taken off the ventilator, though he still being given oxygen, and is on the road to recovery.

Global leaders were quick to express their support and concern for Johnson. In a news conference President Donald Trump stated that all “Americans were praying for his recovery.”

“He’s been really something very special – strong, resolute, doesn’t quit, doesn’t give up,” said Trump adding that he had asked two pharmaceutical firms developing potential COVID-19 therapies, to get in touch with the British government and offer their services.

French President Emmanuel Macron had tweeted his “support” to the British prime and wished him a “speedy recovery.” German Chancellor Angela Merkel sent her best wishes while Italian Prime Minister Giuseppe Conte tweeted, “You have the whole Italian government’s support and my personal one.” In India, Prime Minister Narendra Modi tweeted, “Hang in there, Prime Minister @BorisJohnson! Hope to see you out of hospital and in perfect health very soon.”

Even before the shock news of Johnson’s health, Britons are finally waking up to the seriousness of the Wuhan coronvirus with health experts warning that the worst effects of the pandemic are likely to be seen over the next two weeks. Queen Elizabeth, whose health had also caused media speculation given that she had recently met Johnson and Prince Charles, who also has coronavirus symptoms and is now in self-isolation, made a historic televised address to the nation on Sunday.

Aside from her annual Christmas addresses, this is only the fifth time that the 93-year-old sovereign has addressed the nation in her 68-year-long reign. The other instances have included the death of the Queen Mother, the death of Princess Diana, the first Gulf War in 1991 and the Queen’s Diamond Jubilee Message in 2012.

Royal analysts and mediapersons saw the last sentence as particularly significant as ‘We will meet again’ was a popular song in the war years of the 1940s and it suggested that the Queen was calling for the same unity of spirit and courage from her people.

They will need lots of that spirit. According to figures released by the health ministry the death toll rose by 439 over the weekend bringing the total tally to 5,373.

The Department of Health also added that 208,837 people have so far been tested, of which 51,608 have been confirmed as positive for the virus. So far, the majority of cases and deaths have been in England. Wales showed an extra 27 deaths taking the overall number to 193, and two further deaths in Scotland where the total now stands at 222.

The death toll has shown up the failure of the British government to truly grasp the serious nature of the pandemic. Unlike Europe which shut down schools, bars, restaurants theatres and clubs while imposing strict fines on those who ventured outside, Britain adopted a controversial and now much derided “herd immunity” theory to tackle the crisis.

Thus, life continued as normal with all institutions staying open and it was only when a study carried out by immunologists at Imperial College London and the London School of Hygiene and Tropical Medicine was released in mid-March, was there an about-turn by the government.  The study suggested that if the numbers of people hospitalised in Italy would be repeated here, 30 per cent of hospitalised patients would require intensive care treatment, a number the NHS could not cope with.

Britain did wake up to the crisis but like the US — the new epicentre for the coronavirus — the UK continued in its lax approach initially, issuing advisories to its citizens, stating that only the elderly were at risk and needed to stay home. The government did issue a lockdown on March 23, asking people only to go out for food and medicines but it was too late by then.

The other problem was that people saw the lockdown as curbs on their freedom, with a large number of them visiting parks and other social areas and sunbathing during this period, even on Saturday. The death toll has since risen alarmingly over the weekend, and anger has come quick and fast against the prime minister and his government with the hashtag #ToryGenocide trending for a while on the internet.

Though the prime minister seems to be on the road to recovery, the nation remains in panic mode. A lot will fall on the shoulders of Dominic Raab, who has to make some big decisions with or without Boris.  There are reports that he and the government will extend the three-week lockdown, which is scheduled to end next week, but there are big concerns about its economic fallout with the hospitality industry bearing the brunt of it.

Around a million of the estimated 3.2 million workers in pubs, bars, restaurants and hotels are likely to lose their jobs and that figure could very well increase if the lockdown persists.  Other sectors especially the manufacturing sector, already hit by Brexit, could follow suit. Like Johnson, the British economy is in the ICU and there seems no immediate cure in sight.